In April 2012, the archaeological team from Sichuan Institute of Antiques and Archaeology has conducted a salvage excavation to the Sangangping Stone Burials in Luding County, Sichuan province.

Archaeologists uncovered 61 tombs from the middle and late Warring States period. Due to constructions the site has been so seriously damaged that some tombs only remain the bottom. The northeast part of the site, which is in better state of preservation, is confirmed to be stone coffin burials. The way the tombs are built could be described as following. Firstly a rectangular pit is dug and the deceased and its burial objects are put inside, then stone walls are constructed closely along the four walls of the pit. Sometimes a piece of long stone is placed athwart near the head or the feet end. Afterward the pit is filled with earth. All tombs possess similar small sizes, mostly measuring 1.3~1.5 m long, 0.5~0.7m wide, and 0.2~0.6m deep. Most skeletons are poorly preserved, some of which are even disappear. Seen from those remained, all are placed on its side with legs bent. Most burials have no coffin, except that in 10 tombs under the deceased coffin traces have been found, and in 2 tombs traces of the side and bottom plank of coffins could be seen. 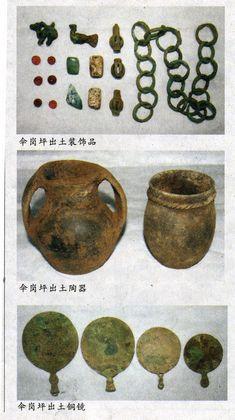 Most tombs contain burial objects. Normally headdress objects made of bronze or jade are found near the head or the neck, and bracelets, seashells and roundels near the hands. Jars, cups, bronze knifes and dagger-axes are often placed near the head, bronze daggers near the waist, and stone arrow heads, sometimes bronze daggers, mirrors and ornaments, near the feet. The excavation and investigation yields totally 240 objects.

On some objects such as bronze knifes and daggers remain traces of wooden scabbards and wrapping threads. On the bottom of ceramic jars and cups residue of grain crops could be seen. 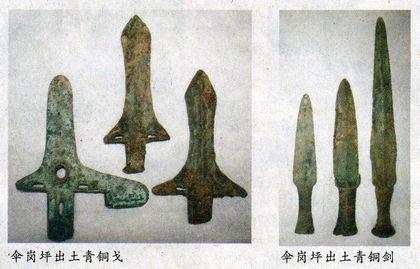 In the excavated region, the burials are arranged in high density and in order, likely to be a well-planed clan cemetery. The burial objects from the 61 tombs differ not considerably, only based on social division and gender differences, indicating that the social disparity does not happen yet.

The excavated objects from the Sangangping burials provide quite valuable materials for studying the ancient history of southwest China, especially for studying the stone coffin burials of this region. It is of great significance for the research on the region’s cultural exchanges and diffusions during the Warring States period.      (Translator: Tong Tao)