New artifacts discovered yesterday at the Warring States Tombs in Liu'an, Anhui Province have again thrust the seminal archaeological find into the spotlight. The newly-unearthed finds, which, among other objects, include a well-preserved sword and a suit of leather-made armor, add to the speculation that the tombs' occupants were a military general and his wife.

The 40-centimeter-long sword particularly wowed archaeologists, who said that the wooden box containing the blade is virtually undamaged even after 2,200 years underground.

"The casting techniques of the Warring States period was well-developed, so much so that many swords we've unearthed from that time are still sharp after thousands of years," said Li Dewen, a researcher at the Anhui Institute of Cultural and Historical Relics and Archaeology.

The armor took several hours for workers to excavate. Though researchers say it could break at any moment due to oxidation, the leather and rope that connects the various pieces only show minor signs of decay.

Based on related finds, Li speculated that the a ministerial-level military officer and his wife were buried in the tombs. 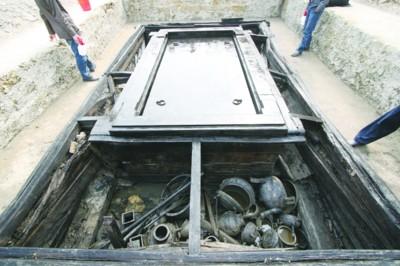 A number of cultural relics will be unearthed in the chamber of the southern tomb.

Archaeologists uncovered an entire suit of leather armour in an under-excavation Warring States period tomb in Lu'an city, Anhui province Thursday, believing it to be the most precious relic among the 200-odd funeral objects that have been unearthed.

The suit, found in the outer chamber of the southern tomb, appears to be complete, including  shoulder plates, breast plates, stomach plates and leg plates. Inside the armour is a layer of fabric. It is supposed to be the lining, which can make wearers comfortable, the archaeologists said.

"The armour is very rare, and its value is higher than any other cultural relics unearthed in both of the two adjoining tombs," said Li Dewen, a researcher of the Anhui Provincial Cultural Relics and Archaeology Institute.

It is the first leather armour excavated in the country, where about ten burial suits made of jade have been found. In graves of royal members in Han Dynasty, archaeologists often unearth jade suits. "We haven't seen any leather suit before. If it can be restored, all the jade suits will be outshone," Li said.

"It is common for weapons to be buried with the dead, but not for armours," according to an anonymous archaeologist.

Li Dewen said priority will be given to the protection of the body armour, followed by tentative restoration. It will be knotty  to keep it from being oxidized or getting mildewed because it is made of leather, an organic matter, and has been soaked underground for more than 2,000 years, let alone bring it back to its former condition. "To recover the leather armour will be more difficult than the restoration of jade burial suits," he said. "I'm afraid it will take at least one year to finish."

Worse still, the archaeologists have no precedent to go by in restoring the rare armour. Li said they cannot but follow the example of jade suit restoration, adding that a colossal sum of money will be spent.