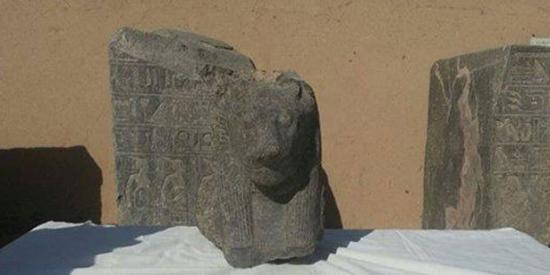 Photo courtesy of the Ministry of Anitquities

Two black granite statues of the ancient Egyptian lioness goddess Sekhmet have been unearthed at the mortuary temple of Amenhotep III on the west bank of Luxor, antiquities Minister Mamdouh el-Damaty stated Tuesday.

“Discovered at the hypostyle hall of the temple, the statues are very well preserved and represent the Goddess Sekhmet in a human body with a lioness head crowned with the sun disc and cobra,” said al-Damaty.

A team of German-Egyptian archaeologists from the Colossi of Memnon and Amenhotep III Temple Conservation Project (CMATCP) came across the statues during a routine excavation carried out at King Amenhotep III mortuary temple in the Kom Al-Hittan area on the west bank of Luxor, according to Damaty.

This is the third time the same mission has discovered sets of statues of Sekhmet, Abdel-Hakim Karar, director of the Upper Egypt Antiquities Department, told The Cairo Post Tuesday. “In March 2013, the same mission discovered 14 statues of the same goddess, while a few years earlier a set of 64 statues depicting Sekhmet in different shapes and sizes were also unearthed,” said Karar.

The discovery emphasizes how Amenhotep III’s funerary temple was once filled with Sekhmet statues of different sizes and shapes. It also sheds light on the significant  role of Sekhmet during the reign of the pharaoh. “The placement of her statues was for protection, as she was the goddess of war and destruction,” said Karar. 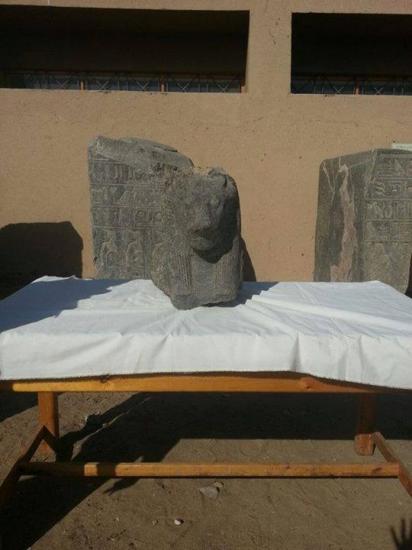 Photo courtesy of the Ministry of Anitquities

“According to the ancient Egyptian mythology, Sekhmet, depicted in the shape of the fiercest hunter known to the ancient Egyptians, was originally the warrior goddess as well as goddess of healing. She was considered as the protector of the pharaohs and led them in warfare,” archaeologist Sherif el-Sabban told The Cairo Post Tuesday.

Amenhotep III, the ninth pharaoh of the 18th Dynasty, ruled Egypt from 1386 B.C. to 1349 B.C. and his reign is believed to have marked the political and cultural zenith of ancient Egyptian civilization, said Sabban.

He was succeeded by his son Amenhotep IV, better known as Akhenaten.