Louxor (Egypte) : Capturing the majesty of Luxor in 3D

Capturing the majesty of Luxor in 3D

For a while, it seemed the revolution in Egypt would end his mission before it had even begun.

Thomas A. DeFanti, a research scientist and expert in data visualization at the University of California, San Diego, had been planning for months to capture spectacular 3D surround images of Egypt’s temples at Luxor on his way to Saudi Arabia early in April, where he would spend a month working with colleagues at King Abdullah University of Science and Technology (KAUST).

It would be a proof-of-concept expedition to see if the 3D CAVEcam — two Lumix GF1 cameras carefully calibrated to take simultaneous right and left images — would be functional in the super bright, hot and dusty conditions of the Nile River Valley. But for DeFanti, an avid traveler and lover of photography, it would also be a way to bring the splendors of one of the primary world heritage sites back to his state-of-the-art visualization facility at UC San Diego’s California Institute for Telecommunications and Information Technology (Calit2).

“I knew there were a lot of things at Luxor that were visually interesting and would look good in 3D,” explains DeFanti, who, as a grad student in 1970, developed an interest in computer graphics as a way to explore electronic photography (and is still at it).

“But this was also a way to test the CAVEcam in the field to see if would withstand rigorous conditions. It’s like when you buy a new tent — you test it overnight before you even think about taking it out for a two-month trek.”

DeFanti says he was also interested in conducting indoor focus and exposure tests of the CAVEcam. He suspected the 3D color detail spanning the interior walls of Luxor’s various structures would make for compelling imagery, especially when projected onto Calit2’s 3D StarCAVE or onto its massive tiled HIPerSpace display.

DeFanti’s colleagues at KAUST were also eager to see the surround stereo imagery in the facilities of the KAUST Visualization Laboratory (KVL). Calit2 and KAUST established a four-year special partnership in 2008 to collaborate on world-class visualization and virtual reality research and training activities, and KVL features several visualization technologies first conceived by DeFanti and his long-time collaborator, the computer scientist and artist Dan Sandin of the University of Illinois, Chicago.

One of KVL’s displays — the fully immersive Cornea CAVE — can also project 3D images overhead, and DeFanti predicted the looming statues at the Luxor Temple would make for a stunning display.

Having witnessed the student uprisings in Paris as an undergrad and participated in several marches on Washington during the early 1970s, DeFanti was no stranger to revolution, but he worried about transporting a backpack full of what could be viewed as surveillance equipment to a country very concerned about images following President Hosni Mubarak’s overthrow.

After some Egyptian colleagues assured him that Egypt was, in fact, strongly encouraging tourism, DeFanti made plans at the end of his stay at KAUST to travel to Luxor with KAUST researchers Greg Wickham and Adel Saad. Saad and Wickham turned out to be critical to the success of the expedition.

DeFanti assumed it would be a straightforward process — book the flights, conduct the shoot, try not to get heat stroke — but Saad, who is Egyptian, knew that any official photo shoot in Egypt would require the proper permits. And he audaciously planned to get them from the Minister of State for Antiquities himself.

That man is Dr. Zahi Hawass, an internationally recognized Egyptologist who has appeared on numerous National Geographic television specials about Egypt’s ancient treasures and was even the subject of a U.S. reality series called “Chasing Mummies.”

"It was the equivalent of emailing the head of the National Park Service here to ask to photograph the Canyon de Chelly,” says DeFanti.

In the meantime, DeFanti, Saad and Wickham made an excursion to the Pyramids of Giza, where they quickly learned that the Egyptians “were very serious about not even letting us set up a tripod without a permit,” DeFanti says. “There were guards everywhere, and some of them had machine guns. That’s when we knew this wasn’t going to be easy.”

“I wrote Dr. Hawass with little hope of getting a response,” adds Saad. “I mentioned my admiration for him along with my hope to share some visualization technology that may benefit Egypt,” and to his surprise, Hawass wrote back, saying, “Meet me Thursday.”

Hawass, who pursued his Ph.D. as a Fulbright Fellow at the University of Pennsylvania, was impressed by the CAVEcam and dashed off a special permit issuing explicit permission to photograph any site in Egypt, except for the interior of the tombs in the Valley of the Kings. He then sent DeFanti, Wickham and Saad off to tour Cairo’s emerging National Museum of Egyptian Civilization, where they discussed the possibility of visualization system collaborations with KAUST and UC San Diego. 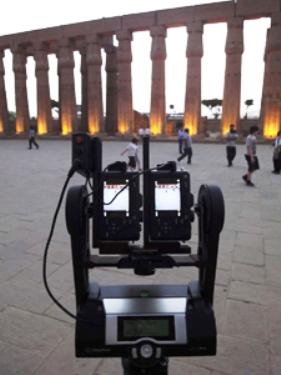 To achieve a 360 x 180 degree panoramic effect, the CAVEcam has to take 72 pictures per "eye," with the robotic GigaPan Epic Pro automatically repositioning the camera each time, for a total of 144 images

Says Saad: “I really think Dr. Hawass saw something special with the KAUST/Calit2 visualization technology, because he is constantly presented with advanced technologies all the time, from NASA satellite imagery capabilities to Japan's advanced robotic tomb rovers. He has to filter for the best.” With Hawass’ personal seal as their passport to entry at Luxor’s expansive ancient ruins, their mission from then on went as smoothly as a moonlit ride up the Nile.

“It did confuse things when the new Egyptian government decided to abolish daylight savings without telling the airline passengers about it,” recalls DeFanti. “Suddenly our flight out of Luxor was an hour earlier than we thought it would be."

Meanwhile, Saad spent his time negotiating at every stop since most of the site officials had never seen a pass like the one Hawass had issued.

“Wickham took on the role of the project manager — he constantly kept us hydrated, paid attention to details when the heat made it hard for me to concentrate, and tipped the guards so they would stay out of the CAVEcam shots,” says DeFanti. “As a result, the images were all perfectly exposed and focused, and many more were taken than was planned.”

On the first of two days in the field, the team woke at dawn to shoot the Temple of Luxor, and then moved on to the Temple of Amun-Re (Karnak), where they captured images until the CAVEcam’s batteries ran out. Once the heat of the afternoon had passed, they reconvened to capture Luxor Temple again at night, where the golden floodlit statues of Ramesses II were set against a deep indigo sky.

On day two, DeFanti, Saad and Wickham moved to the West Bank, onto the Ramesseum, the memorial temple of Pharoah Ramesses II, and then to Medinet Habu, where some of the original paint on the bas-reliefs inside the temple of Ramesses III is still intact. Finally, they photographed a group of reliefs at Amun-Re that relate to the campaign of Shoshenq (Shishak), the first ancient Egyptian name of a pharaoh mentioned in the Bible. 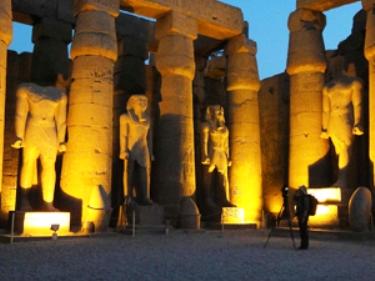 DeFanti captures CAVEcam images of the Temple of Luxor at night.

Even in the best conditions, the process of taking stereo photos with the CAVEcam is complex and fatiguing. Dick Ainsworth, DeFanti’s collaborator since 1973, designed the device to simultaneously trigger the shutters of both cameras, like two mechanical human eyes. But to achieve a 360 x 180 degree panoramic effect, the CAVEcam has to take 72 pictures per “eye,” with the robotic GigaPan Epic Pro automatically repositioning the camera each time, for a total of 144 images.

Those images, which are each 10 megapixels in resolution, then need to be stitched together like a quilt using a painstaking stitching program called PTGui Pro. Ainsworth subsequently stitched all the Luxor images comfortably sitting at his home in Ridgeway Wisconsin.

Complicating things further are the camera’s functions, which — from focus to exposure — have to be all manual so there is frame-to-frame coherence. Fortunately, DeFanti first learned how to take 35mm pictures with a manual SLR in the 1960s, and received enough CAVEcam training from Ainsworth to be able to operate it almost blind. They tested the device with the KVL team during an earlier expedition to Mada’in Saleh, a Nabotean tomb site in northern Saudi Arabia.

DeFanti says the training at Mada’in Salah turned out to be crucial, since he found it to be nearly impossible to see the CAVEcam’s LCD readouts underneath Luxor’s blazing sun.

“Next time I’ll bring a black hood,” he says, “just like the original photographers used to do, so I can see the screen on the back of the camera.”

But even with all the logistical challenges, when all was said and done, “The test mission to capture Luxor in 3D, was a stunning success,” says DeFanti. The first nine of these surround stereo images already have premiered in the Calit2 StarCAVE and NexCAVE (a 3D virtual reality display made from passive stereo HDTVs). They were also shown in the KAUST Cornea and NexCAVE via the high-speed network between UC San Diego and KAUST, which allows the transfer of dozens of gigabytes easily.

“Only three of these CAVEcams currently exist in the world — the original developed by Dick and duplicates at KAUST and Calit2,” notes DeFanti. “I basically wanted to prove that any photographic team could successfully use the CAVEcam in the field — and we did that, even in the midst of heat, fast cab rides and a transitional government.”