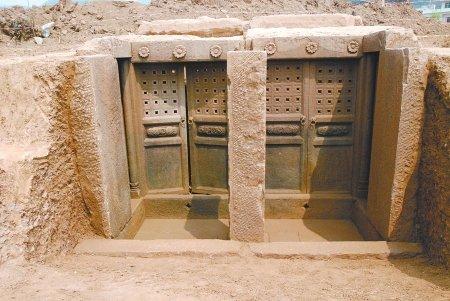 A well-preserved and exquisitely designed Ming Dynasty (1368 to 1644) tomb was found at a Longquan construction site for the new Chengdu-Chongqing bullet train tunnel,

The tomb is the only one featuring engraved text of the 13 unearthed in the 700-square-metre area near the Shuangbeicun Village in Longquanyi's Baihezhen Town. The text, Jiazi Nian Ji Nian was noticed on the tomb's back wall.

The Chengdu archaeological team finds such a well-preserved tomb to be rare in the area.

The tomb has a pair of doors with vividly carved patterns of flowers, clouds and other designs. There are coin-shaped drainage holes on the doorsills too.

The stone chamber tomb is about 4 metres tall and 3 metres wide, according to Xie Lin, a team member.

The stone doors to the two parallel chambers are more than a metre high and the ring door knockers are made of steel, he added.

The discovery sheds light on funeral customs during the Ming Dynasty. It can also be established that the tomb belongs to someone of a higher social status than commoners.

These graves have been broken into before, but archaeologists found some dragon-printed cans and other burial items unique of the Ming Dynasty.

The door can be opened and closed properly, despite being buried underground for so long.

The coffin platform is raised from the ground with a groove for drainage surrounding it, serving the same purpose as the coin-shaped drainage holes.

The archaeological team concludes that the tomb has been kept dry and well-preserved, signifying that the drainage features have been effective.