A medieval mystery of gigantic proportions has been uncovered by archaeologists – at a Somerset housing development.

For the foundations of a massive early manor house are emerging from the rich red soil at Bloor Homes' site at Longforth Farm, Wellington. Experts had no idea it was there, and who its owners were, why they chose this sometimes waterlogged site, and why they left 600 years ago are still a mystery.

Just as tantalising is the question of how the house came to be so completely stripped of virtually every piece of fine fabric. However much deserted buildings have been "robbed" of material in the past some sign of fine carving or dressed stone usually remains, even if in fragmentary form. Here only the tough knobbly local churt stone that built the foundations and lower walls remains. 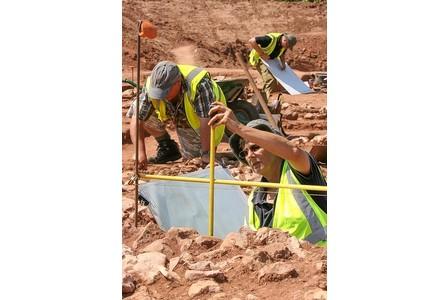 Archaeologist Jane Harris takes some measurements, floor tiles found at the site, and a display of tiles and fragments

But those bare walls and the immense open space of the main hall, the size of a tennis court, are still the most extraordinary discovery of the mediaeval period in Somerset for the last 30-40 years Steve Membery Somerset County Council senior historic environment officer said yesterday.

"I think the building has been picked up, packed up on carts and taken away," he said.

Did its owner grow tired of managing the water which would have flowed down the sloping site? Did he inherit a bigger estate and move his best "bits" to the new site? More detective work will help unravel the mysteries, and Mr Davis hopes local history and buildings research groups can help. They can help research possible owners, and investigate where some of the missing stone may still survive, perhaps in other ancient buildings. 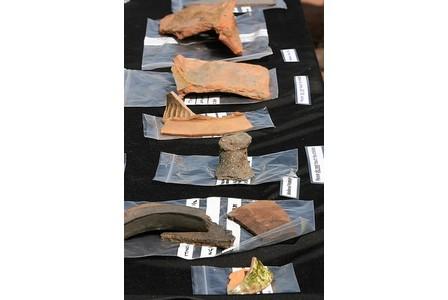 Senior buildings archaeologist Bob Davis and archaeologist Mark Bagwell have unearthed a variety of floor tiles and other medieval fragments during excavations at Longforth Farm, Wellington

Last week, six weeks into the excavation, came a discovery which may provide a clue to the owner. ExcavatorMark Bagwell found two floor tiles in the wetern end of the building, the area thought to have been occupied by the private chambers. One shows a design of a heraldic shield bearing a chequered pattern and a crest of a three-towered castle. "We need to do further research but it is a heraldic symbol associated with the St Barbe family, which is associated with Hampshire. Many families took that name and symbol so we need to do more work but it is an exciting development," said Mr Davis.

Lying only five feet away was another tile with a superb image of a knight gripping a lance as he gallops into battle. It is thought to date from the mid 13th century. "Similar tiles have been found at Cleve and at Glastonbury" explained Mr Davis. "They are made to a pattern and often used in pairs, depicting Richard the Lionheart and Saladin, from the Third Crusade."

Several other tiles, showing fleur de lys and trefoils had already been found by site director Simon Flaherty, giving the first evidence of likely church links with the site. Slate roof tiles and high quality glazed pottery have also emerged and the team has identified what it believes to be a drain running under a detached building which may have been a kitchen. Oyster shells remain elsewhere on the site.