Londres (G-B): Tower of London staff 'used magic to repel the forces of the Devil'

The Tower of London has arguably been England’s premier fortress for almost a thousand years – but new evidence suggests that despite its impressive fortifications, its staff sometimes felt far from secure.

Research carried out by archaeologists in one of the fortresses’ major buildings has revealed that at least some of its inhabitants felt so insecure that they tried to use magic to give themselves an extra layer of protection.

Archaeologists, carrying out survey work in the residence of the Queen’s representative in the Tower, have found dozens of ‘ritual protection’ marks literally burnt into the timber uprights holding up the roof.

Historic Royal Palaces, which run the Tower of London, says that the discoveries are “hugely significant”. It is believed that the marks – 54 in total – were put on the timbers, mostly between the mid-16th and earlier 18th centuries, as a way of trying to magically protect the building from fire and lightning and to repel the forces of the Devil and the spells of witches.

The mesh motif symbolized a net in which the devil or his demons could be caught and prevented from entering the building. The wheel-shaped symbol known to  historians as a ‘hexfoil’ (or ‘triskele’) was seen as another form of demon trap – as demons were thought only to follow straight lines and could therefore be eternally trapped within a circle. The double V-signs represented the Virgin Mary (Virgo Virginum) – or an upside down version of M for Mary. 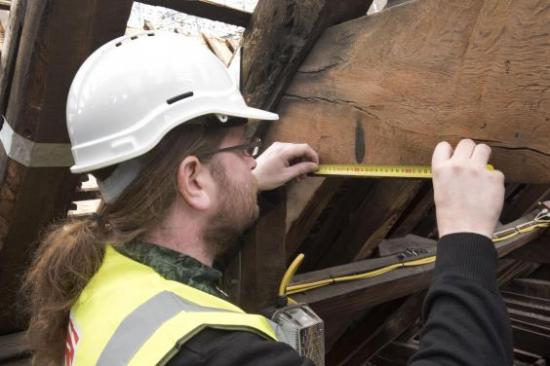 The roughly 200 year period in which the marks and symbols were burned and carved into the building’s roof timbers were among the most troubled and turbulent in English history. For those years witnessed the Reformation, the Counter-Reformation, the Civil War and countless witch hunts. During that era, in and immediately outside the Tower of London itself, a grand total of around 80 people were executed.

The 16th and 17th centuries were periods of great political and religious upheaval in which traditional practices and ways of life were swept away. Huge numbers of people felt spiritually insecure and vulnerable. What’s more, the huge increase in printed pamphlets and books meant that new fears as well as new ideas spread much more easily than before.

The archaeologists have also found a ritual deposit of animal bones and other everyday objects which had been secretly placed in a chimney void – probably in the early 18th century.

Consisting of cow and sheep bones (mostly from prime-cuts of meat), rabbit bones, five strips of leather, a broken bladed tool and two broken clay pipes, it almost certainly represented a magical way of seeking to confuse and distract the Devil and his demons.

The archaeologists also found a series of  around 20 ritual protection burn marks on an internal oak door within the Queen’s House – the building within the Tower complex which was the residence of the monarch’s representative there, the Lieutenant of the Tower. The Tower of London has always been of particularly high status – because it has always been a royal fortress, charged over the centuries with guarding London,  and guaranteeing royal control over the capital.

The burn marks on the oak door and on the roof timbers were all vertical 3-7 centimetre long lines deliberately singed into the wood – often in groups.

The survey of the 475 year old roof timbers was led by  Museum of Archaeology historic buildings specialist, James Wright. 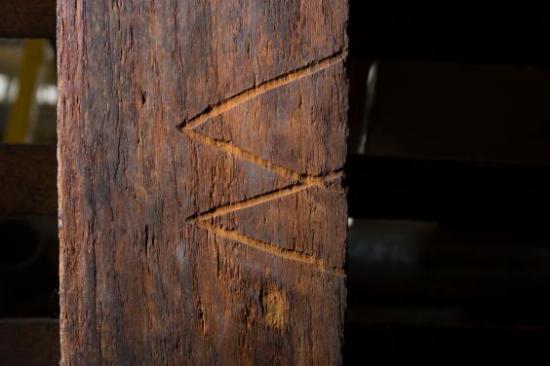 Markings at the Tower of London

“The Tower of London is well known for historical graffiti associated with high profile political prisoners, but the recent discoveries offer a new perspective. Scratched and burned into the very timbers of the building, they reveal something of the hopes, fears and desires of the everyday occupants of this iconic castle,” said Mr. Wright.

The discoveries were made during a major conservation program in the wooden roof structure of the Queen’s House, carried out by Historic Royal Palaces.

“The new discoveries at the Tower – one of the largest groups of ritual protection marks ever found in Britain – reveal the depth of spiritual fear that seems to have gripped ordinary members of staff at the Tower at some periods in its past,” said an expert on ritual protection marks, historian Matthew Champion, author of a recent book on medieval and later ritual and other graffiti (Medieval Graffiti – the Lost Voices of England’s Churches).