Londres (G-B): The mystery of the headless skeleton revealed by Crossrail 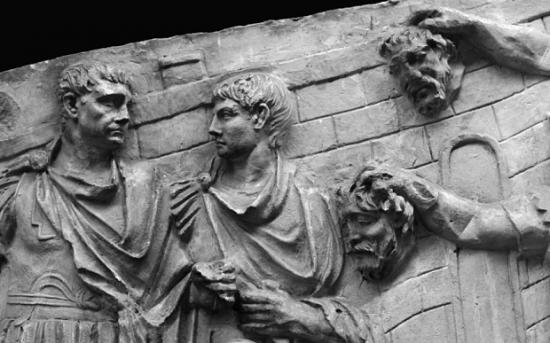 Of all the discoveries an archaeologist could make, this has to be one of the more gruesome. Twenty feet beneath Liverpool Street, in the heart of the City of London, excavators recently uncovered a human skeleton deprived of its head. The skull had been placed between the victim's legs.

The mysterious remains, which date from the Roman period, were dug up as part of the Crossrail project, a £15 billion scheme to establish a 26-mile rail network across the capital. And they are just one of several grim artefacts that are challenging long-held beliefs about Roman Britain, shedding light on ancient Celtic practices and terrifying Roman customs.

As well as the headless skeleton, a team from the Museum of London Archaeology (MOLA) has found several skulls in a neat row alongside a tree-lined Roman road.

The theory up to now, based on the discovery of other skulls in this quarter of the city, was that the heads had simply washed up here from an ancient cemetery. The River Walbrook, a former tributary of the Thames, once flowed through this part of London, and could have eroded the cemetery's soil, carrying bones with it. But the discovery of these latest skulls doesn't fit the erosion theory.

"These discoveries can't all be explained by the natural environment," says the project's lead archaeologist, Jay Carver. "I think we're now looking at a mix of origins. Some of the skulls are likely to have arrived here through erosion by the river, but evidence is also mounting to support the theory that this part of London was an execution and display area."

This may account for the discovery nearby of shackles and a manacled wrist. And it is known that gladiators who fought in the nearby Roman amphitheatre (which was built in around AD120 and is now buried underneath the Guildhall) would often decapitate their opponents. The amphitheatre was also used to execute common criminals, whose heads would be displayed on poles to act as a deterrent to other would-be miscreants. 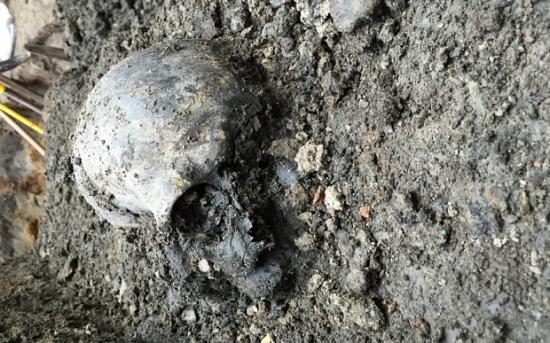 It is also possible the skulls were collected by Roman or British headhunters, who decapitated their enemies in battle and displayed the heads as trophies. There is evidence of head-taking from across the Empire - Trajan's Column in Rome has relief carvings that show the Romans decapitating their foes.

But Carver and his colleagues have yet to detect the sort of fracturing you'd expect if the skulls had been placed on spikes, and some experts have speculated that they may instead have been simply set down on the ground, raising the possibility that the skulls were part of a ritual dedication and nothing to do with punishment at all.

• What can we learn from Roman graffiti?

Celtic pagan beliefs coexisted, and even mingled, with Roman religion throughout England. According to one of the oldest Celtic beliefs, the head was a source of unique potency, almost a life force of its own, in which one's strength and wisdom were concentrated. When someone died, their head was therefore seen as a worthy offering to the gods, which could be removed and dedicated ritually. This might explain why several of the London skulls are missing jawbones. Those that survived the deceased sometimes kept fragments of bone, possibly to protect themselves from evil spirits.

Whoever buried the Liverpool Street skeleton with its head between the knees might have hoped to prevent the spirit of the deceased from wandering the Earth. 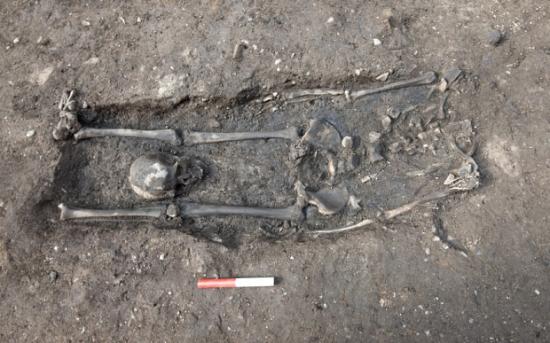 "There is a long-standing northwest European concern with heads, and this allows it to be argued that the Walbrook skulls were part of this wider and longer-standing interest," suggests Dr Dominic Perring, principal research fellow at University College London's Institute of Archaeology.

Bronze sculptures of other body parts, including arms and hands, have previously been discovered at Springhead near Dartford, and are believed to have been pagan dedications made in the interests of restoring health.

According to Roman historians, the Celts also practised ritual human sacrifice. While Julius Caesar noted that those who lived in Gaul sacrificed humans to the gods to try to reverse sickness or ill-fortune in battle, the historian Tacitus described Druids examining human entrails in Anglesey, Wales.

Of course, the Crossrail site has not just unearthed artefacts from the Roman era. The experts from MOLA have also amassed a vast collection of bones, pottery and historical objects - many of which are the subject of a Channel 4 documentary, London's Secret Skeletons, next month - that are helping them to shed light on the history of London all the way up to the 20th century.

But it's the decapitations that may yet make the most memorable, even alarming, addition to the history books.