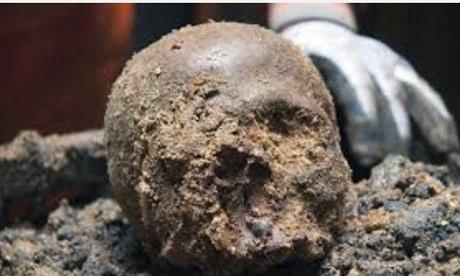 The work of Redfern and Bonney may force archaeologists to have another look at more recent skull finds such as the one above, excavated during work on a new Crossrail station. Photograph: The Guardian

Scores of skulls excavated in the heart of London have provided the first gruesome evidence of Roman head hunters operating in Britain, gathering up the heads of executed enemies or fallen gladiators from the nearby amphitheatre, and exposing them for years in open pits.

"It is not a pretty picture," Rebecca Redfern, from the centre for human bioarchaeology at the museum of London, said. "At least one of the skulls shows evidence of being chewed at by dogs, so it was still fleshed when it was lying in the open."

"They come from a peculiar area by the Walbrook stream, which was a site for burials and a centre of ritual activity – but also very much in use for more mundane pursuits. We have evidence of lots of shoe making, so you have to think of the cobbler working yards from these open pits, with the dog chewing away – really not nice."

"We believe that some of the heads may be people who were killed in the amphitheatre. Decapitation was a way of finishing off gladiators, but not everyone who died in the Roman amphitheatre was a gladiator, it was where common criminals were executed, or sometimes for entertainment you'd give two of them swords and have them kill one another. Other heads may have been brought back by soldiers from skirmishes, probably on the Hadrian or Antonine walls – again, it would have taken weeks to bring them back, so not a nice process."

The 39 skulls were excavated at London Wall almost within sight of the Museum of London in 1988, and deposited at the museum, but the scientists have only recently applied improved forensic techniques to them. Redfern and her colleague Heather Bonney, from the Earth Sciences Department of the Natural History Museum, publish their results for the first time this week in the Journal of Archaeological Science.

The tests revealed that almost all the skulls are of adult males – some could not be identified – and most bear scars and slash marks of many wounds inflicted around the time of death. Many also have multiple healed wounds, one with the shattered cheek bone typical of a violent punch in the face, showing their lives were not tranquil. On some there is clear evidence of decapitation with a sword: possibly all were killed in that way, but if the fatal blow was through the neck the proof has vanished with the rest of their bodies.

"Whether they died in the amphitheatre or in battle, decapitation with a sword is a very efficient way of ending a life – somebody very much wanted these people dead," Redfern said.

The evidence suggests that they were left for years decomposing in the open pits.

"There is none of the fracturing you'd expect if they'd been put on spikes, so it looks as if they were just set down and left – though of course you could have had a nice shelf to display them on."

There is evidence of head taking from across the Roman empire, including Trajan's column in Rome which shows clean shaven Roman soldiers presenting bearded barbarian heads as trophies to the emperor. Heads are also shown being held up in triumph on tomb stones of cavalry officers in Britain and elsewhere. Although pits of body parts have been found in Britain, the London skulls, deposited over several decades, are an unprecedented find from the Roman capital.

Hundreds of skulls have been found for centuries along the course of the long vanished Walbrook – most recently by the team working on the new Crossrail station just outside Liverpool Street station.

They have often been interpreted either as washed out of Roman cemeteries, or as victims of Boudicca's revolution, when the East Anglican leader of the Icenii tribe swept south to London in AD60, torching Roman settlements and towns.

However the work of Redfern and Bonney may force archaeologists to have another look at the skull finds.

The London Wall skulls are far too late for Boudicca: they have been dated to the 2nd century AD, a time of peace, prosperity and expansion for the Roman city.

"These were all young men, very untypical of what we usually find in Roman burials, where we tend to get the very young and the old," Redfern said.

"Most people in second century London lived peaceful quiet lives – but as we now know, not everyone. This is a glimpse into the very dark side of Roman life."