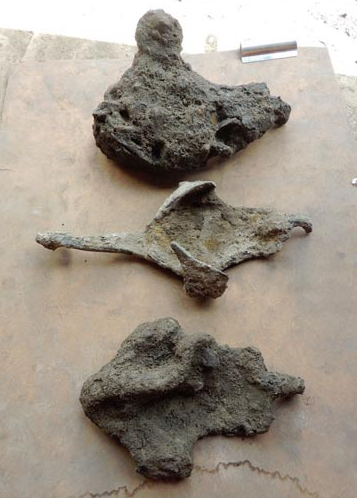 The scene is Londinium, the thriving metropolis at the centre of Roman Britain. A trader is driving his horse toward the local market, making use of a well-formed Roman road.

He is in the area of present-day Liverpool Street, but this is 2000 years ago. And it seems that even the much-vaunted roads that crossed the Roman empire occasionally fell short in the maintenance department.

The horse steps in a rut, which bites at its hoof, pulling free one of its shoes.

Crossrail, Britain’s biggest construction project and the biggest archaeological dig in London for years, is uncovering some remarkable finds, from a Roman road to a collection of 2000-year-old Roman horseshoes that were lost as working animals plied the route.

The shoes, which were made of metal and fastened to the hooves with leather straps, have been found on the road.

It appears that in Roman times, as now, the area around Liverpool Street was a busy thoroughfare, with horses bringing produce from the countryside to residents of what was then known as Londinium.

The evidence of human habitation unearthed by archaeologists dates back 9000 years, found in another area where work is progressing on the massive cross-city rail project.  The discovery of a Mesolithic “tool-making factory”, which included 150 pieces of flint, among them blades, were found at Crossrail’s tunnelling work-site in North Woolwich.

Archaeologists believe prehistoric Londoners were using the site to test, divide and prepare river cobbles used to make flint tools, before transporting them to another site to complete the tool-making process.

Crossrail lead archaeologist Jay Carver said: “This is a unique and exciting find that reveals evidence of humans returning to England and in particular the Thames Valley after a long hiatus during the Ice Age. 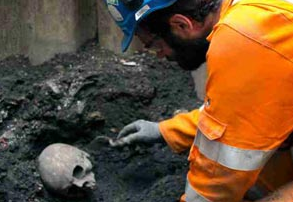 “It is one of a handful of archaeology sites uncovered that confirms humans lived in the Thames Valley at this time. The concentration of flint pieces shows that this was an exceptionally important location for sourcing materials to make tools that were used by early Londoners who lived and hunted on Thames Estuary islands.”

Crossrail also discovered its first piece of gold on the project, a 16th-century gold coin that was used as a sequin or pendent, similar to those worn by wealthy aristocrats and royalty. It was discovered at Crossrail’s Liverpool Street station site. It is unknown how such a precious and expensive gold item made its way to what was then regarded as a deprived area.

The Liverpool Street area has also yielded the 16th Century Bedlam burial ground, near where the Liverpool rail station currently stands, and plenty of evidence of earlier Roman London.

The Roman road unearthed in the area had been exceptionally well made, the archaeologists reported.

Archaeologists are hopeful that when they start large-scale excavations to remove 3000 skeletons from the burial ground next year, they will also locate more of the Roman road, along with foundations of Roman buildings that stood alongside the road.

Carver continued: “This location in the heart of Liverpool Street holds a rich deposit of archaeology that provides an insight into London’s history over the last 2000 years.

Layers of the uncovered roman road, with brushwood and bone.

“Work to relocate local utilities is providing us with a tantalising glimpse of important finds just a few metres below street-level. We plan to excavate the Bedlam burial ground next year and carefully remove up to 3000 skeletons as well as excavate a wider area to unearth Roman London.”

The Crossrail project is expected to cost £14.8 billion. The Crossrail route will pass through 37 stations and run 118km (73 miles) from Maidenhead and Heathrow in the west, through new twin-bore 21km (13-mile) tunnels to Shenfield and Abbey Wood in the east.

When it opens, it will increase London’s rail-based transport network capacity by 10 percent, supporting regeneration and cutting journey times across the city.

Crossrail services are due to commence through central London in 2018.