A Roman coin that was probably used by soldiers to pay for sex in brothels has been discovered on the banks of the River Thames. 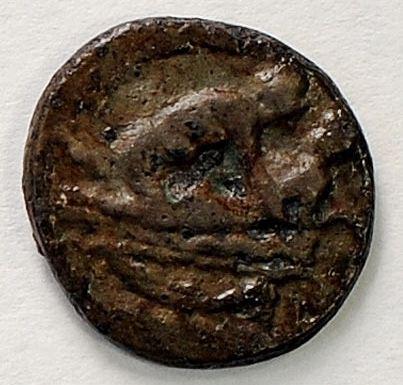 The first ever brothel token to be found in Britain at the Museum of London Photo: Stephanie Schaerer

Made from bronze and smaller than a ten pence piece, the coin depicts a man and a woman engaged in an intimate act.

Experts believe it is the first example of its kind to be found in Britain. It lay preserved in mud for almost 2,000 years until it was unearthed by an amateur archaeologist with a metal detector.

On the reverse of the token is the numeral XIIII, which historians say could indicate that the holder handed over 14 small Roman coins called asses to buy it. This would have been the equivalent of one day’s pay for a labourer in the first century AD.

The holder would then have taken the token to one of the many Londinium brothels and handed it to a sex slave in exchange for the act depicted on the coin.

The token was found by pastry chef Regis Cursan, 37, who made the discovery near Putney Bridge in West London.

He told the Daily Mail yesterday: “The day I made the find it was a very low, early tide and raining heavily. At first I thought it was a Roman coin, because of the thickness and diameter.

“When I rubbed the sand off the artefact the first thing I saw was the number on one side and what I thought was a goddess on the other. Little did I know at the time it was actually a rare Roman brothel token. To find something like that is a truly exciting find.”

The token has been donated to the Museum of London, where it will be on display for the next three months. Curator Caroline McDonald said: “This is the only one of its kind ever to be found in Great Britain.

“When we realised it was a saucy picture, we had a bit of a giggle but there’s also a sad story behind it because these prostitutes were slaves.

“It has resonance with modern-day London because people are still being sold into the sex trade.”

The object, dated to around the first century AD, was protected from corrosion by the mud. Similar tokens have been found elsewhere in the Roman Empire, but this is the first time one has been unearthed in the UK.

Some historians believe the Romans invented prostitution in the modern sense.

It played a significant part in the empire’s economy – with sex workers required to register with the local authorities and even pay tax.