Discovery made by archaeologists working on the Thameslink Programme

Rare ale tankards and pipes used by drinkers in London more than 650 years ago have been unearthed near the city’s oldest railway station.

As part of the Thameslink Programme, archaeologists near London Bridge station have already uncovered several relics, including an ale flagon.

The tankard was discovered during the installation of the Borough viaduct and it is believed that it was used to serve ale in the Abbot of Waverley’s town house.

The rare 14th Century tankard, used by drinkers more than 650 years ago, which has been unearthed near London Bridge Station

It is now on display in the Wheatsheaf pub in Stoney Street near to London Bridge and is owned by the Museum of London.

Jackie Keily, curator at the Museum of London, said: ‘We believe from its distinctive white clay that it was made in Cheam between 1350 and 1440.’

While excavating the original brick arches under the famous station, hundreds of historic artefacts have been found, including timber piles that date back to AD59-83 and may have formed part of a waterfront building near London Bridge.

While excavating the original brick arches under the famous station, hundreds of historic artefacts, such as this arrowhead have been found

Researchers also uncovered traces of the Romans, including a previously unknown bathhouse under Borough High Street.

And they also found evidence that there may have been Saxon or medieval military defences near the river.

Nicky Hughes, the head of communications for Network Rail, London and South East, said: ‘As one of London's oldest stations it's not surprising that we are unearthing such a range of interesting finds shedding light on London's development through the ages. 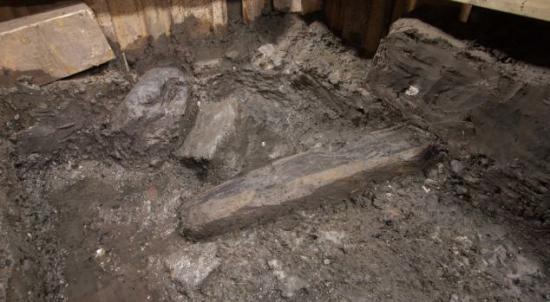 These timbers are estimated to be around 1,000 years old and were found under London Bridge station

‘The £6.5 billion Thameslink Programme is transforming rail travel north and south through London to provide more space, better connections and a rebuilt London Bridge with more space and great facilities.

‘Above us the station is still serving £52m passengers a year but underneath them we are unearthing all this amazing technology as we construct a brand new concourse the size of Wembley Stadium.

‘We are working hard to keep London's oldest station open whilst completely rebuilding it.’