Londres (G-B) : Plague of 1348-49 spread so fast in London the carriers had to be humans not black rats

Plague of 1348-49 spread so fast in London the carriers had to be humans not black rats, says archaeologist 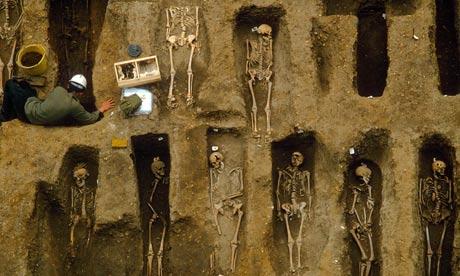 Bubonic plague victims of 14th century London, uncovered in the 1980s in an excavation at the Old Royal Mint. Photograph: Rex Features

Rats weren't the carriers of the plague after all. A study by an archaeologist looking at the ravages of the Black Death in London, in late 1348 and 1349, has exonerated the most famous animal villains in history.

"The evidence just isn't there to support it," said Barney Sloane, author of The Black Death in London. "We ought to be finding great heaps of dead rats in all the waterfront sites but they just aren't there. And all the evidence I've looked at suggests the plague spread too fast for the traditional explanation of transmission by rats and fleas. It has to be person to person – there just isn't time for the rats to be spreading it."

He added: "It was certainly the Black Death but it is by no means certain what that disease was, whether in fact it was bubonic plague."

Sloane, who was previously a field archaeologist with the Museum of London, working on many medieval sites, is now attached to English Heritage. He has concluded that the spread of the 1348-49 plague, the worst to hit the capital, was far faster, with an impact far worse than had been estimated previously.

While some suggest that half the city's population of 60,000 died, he believes it could have been as high as two-thirds. Years later, in 1357, merchants were trying to get their tax bill cut on the grounds that a third of all property in the city was lying empty.

Sloane spent nearly 10 years researching his book, poring over records and excavation reports. Many records have gone missing, while there was also a documentation shortfall as disaster overwhelmed the city. Names of those buried in three emergency cemeteries seem not to have been recorded.

However, Sloane found a valuable resource in records from the Court of Hustings, of wills made and then enacted during the plague years. As the disease gripped – in October 1348 rather than the late summer others suggested, reaching its height in April 1349 – the numbers of wills soared as panic-striken wealthy citizens realised their deaths were probably imminent.

On 5 February 1349 Johanna Ely, her husband already dead, arranged provision for her children, Richard and Johanna. She left them property, spelled out which beds and even pots and pans each was to receive, and placed them in the guardianship of her own mother. She was dead within 72 hours.

It appeared to the citizens that everyone in the world might die. Richard de Shordych left goods and money to his son Benedict when he died in early March: his son outlived him by a fortnight.

Money, youth, and formerly robust good health were no protection. Edward III's own daughter, Joan, sailed for Spain with her trousseau, her dowry and her bridesmaids, to marry Pedro, heir to the throne of Castile. She would never see her wedding day as she died of the plague within 10 days of landing.

John of Reading, a monk in Westminster, left one of the few witness accounts. He described deaths happening so fast there was "death without sorrow, marriage without affection, self-imposed penance, want without poverty, and flight without escape".

In Rochester, William of Dene wrote that nobody could be found to bury the dead, "but men and women carried the bodies of their own little ones to church on their shoulders and threw them into mass graves from which arose such a stink that it was barely possible for anyone to go past a churchyard".

Sloane estimates that people living near the cemetery at Aldersgate, which is now buried under Charterhouse Square, in Smithfield, would have seen a corpse carried past every five minutes at the height of the plague.

As many wills were being made in a week as in a normal year. Usually these would only be activated months or years later: in the worst weeks of the plague there was barely time to get them written down. Many, like Johanna Ely, probably made their wills when they felt the first dreaded sweats and cramps of the disease. Others left property and the care of their children to people who then barely outlived them.

The archaeology of the plague also reveals that most people, however, were buried with touching care, neatly laid out in rows, heads facing west, with far more bodies put in coffins than in most medieval cemeteries – but possibly through fear of infection.

Only a few jumbled skeletons hint at burials carried out some time after death and decomposition; those cases probably arose because bodies were found later on in buildings where every member of the household had died.

Sloane believes there was little difference in mortality rates between rich and poor, because they lived so closely packed together. The plague, he is convinced, spread from person to person in the crowded city.

Mortality continued to rise throughout the bitterly cold winter, when fleas could not have survived, and there is no evidence of enough rats.

Black rat skeletons have been found at 14th-century sites, but not in high enough numbers to make them the plague carriers, he said.

In sites beside the Thames, where most of the city's rubbish was dumped and rats should have swarmed, and where the sodden ground preserves organic remains excellently, few black rats have been found.

Sloane wants to dig up Charterhouse, where he believes 20,000 bodies lie under the ancient alms houses and modern buildings, including the Art Deco block where the fictional character Hercule Poirot lives in the television series. And, if anyone finds a mass medieval rat grave, he would very much like to know.