This is a microphotograph of the tooth crown in occlusal view with indication of the surface covered by beeswax (within the yellow dotted line). Credit: Bernardini F, Tuniz C, Coppa A, Mancini L, Dreossi D, et al. (2012) Beeswax as Dental Filling on a Neolithic Human Tooth. PLoS ONE 7(9): e44904. doi:10.1371/journal.pone.0044904

Researchers may have uncovered new evidence of ancient dentistry in the form of a 6,500-year-old human jaw bone with a tooth showing traces of beeswax filling, as reported Sep. 19 in the open access journal PLOS ONE. 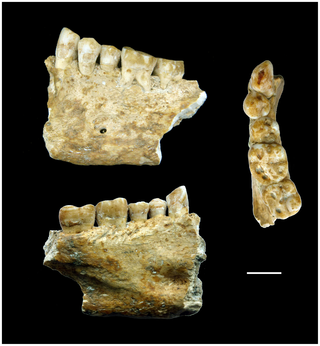 The researchers, led by Federico Bernardini and Claudio Tuniz of the Abdus Salam International Centre for Theoretical Physics in Italy in cooperation with Sincrotrone Trieste and other institutions, write that the beeswax was applied around the time of the individual's death, but cannot confirm whether it was shortly before or after. If it was before death, however, they write that it was likely intended to reduce pain and sensitivity from a vertical crack in the enamel and dentin layers of the tooth. 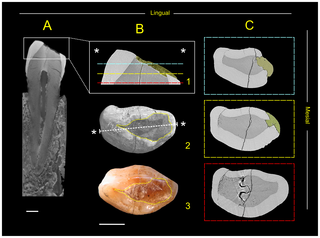 A) Distal-mesial virtual section of the entire Lonche 1 lower left canine (resolution 18 µm). B) 1. Micro-CT detail of the crown showing the thickness of the beeswax (in yellow). Beeswax exactly fills the shallow cavity in the exposed dentin and the upper part of the crack (resolution 9 µm). 2. Three-dimensional virtual reconstruction and 3. microphotograph of the tooth crown in occlusal view with indication of the surface covered by beeswax (within the yellow dotted line). C) Micro-CT based cross-sections of the tooth showing the enamel cracks along the labial and lingual aspects (resolution 9 µm). The positions of the cross-sections are shown in Figure B2. The beeswax is colored in yellow. Scale bars, 2 mm. doi:10.1371/journal.pone.0044904.g002

According to Tuniz, the severe wear of the tooth "is probably also due to its use in non-alimentary activities, possibly such as weaving, generally performed by Neolithic females."

Evidence of prehistoric dentistry is sparse, so this new specimen, found in Slovenia near Trieste, may help provide insight into early dental practices.

SEM images of the occlusal surface of the Lonche canine after the beeswax was removed. The Figures A and B, respectively taken before and after cleaning the occlusal surfaces from beeswax superficial residues, show the exposed area of dentine resulting from occlusal wear and the vertical crack still filled with beeswax. Some chippings with round and smooth edges, indicated by the white arrows in Figure A, are present on the occlusal buccal margin of tooth. In Figure A1 residues of beeswax cover the edges of the vertical crack, while Figure B2 shows that some enamel fragments are lost in the same area, indicated by yellow arrows. Scale bars, 200 µm.  doi:10.1371/journal.pone.0044904.g006

"This finding is perhaps the most ancient evidence of pre-historic dentistry in Europe and the earliest known direct example of therapeutic-palliative dental filling so far", says Bernardini.