The Anhui Provincial Institute of Cultural Relics and Archaeology and the Liu’an Municipal Administration of Cultural Heritage carried out rescue excavations on two wooden-chambered vertical shaft pit tombs, LDJL M566 and M585, between April 1st and April 20th 2011. The tombs are located high up in the western hills near Bailuzhou, a small town in the eastern suburbs of Liu’an, at an altitude of over 60 metres above sea level. The two tombs were built along a north-south axis, are about 10 metres apart and were constructed in the shape of the Chinese “jia” (甲) character. The tomb passage once ran eastward and it is clear that the soil mounds covering the tombs are in differing stages of decomposition.

Tomb M566 was found to consist of an outer storage chamber and an inner chamber containing a triple coffin. The burial chamber was completely covered by roof constructed from planks that had been aligned along a north-south axis. The outer storage chamber is divided into three sections -- an eastern, southern and northern section -- and was found sealed beneath the intact wooden roof. The inner chamber contains a triple coffin which sealed wooden plank was described twelve square grids aligned north-south with wood putty and lacquer paint. The burial chamber and triple coffin form a rectangular box-like structure and the excavating team discovered that the wooden planks were all joined together through the use of mortise and tenon joints. In addition, two wooden supports aligned north-south were found buried beneath the floor of the burial chamber. 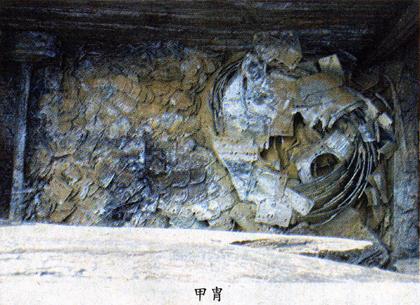 The burial pit was filled with compacted layers of firm, variegated soil which consists primarily of blueish grey clay and with tamping sandy layers approximately 13 to 16 centimetres thick. Two iron implements used for digging the burial pit and which date back to the Warring States period were found buried within the fill soil in the south-eastern and north-eastern corners of the burial chamber. The walls of the tomb pit are relatively smooth and the remnants of the tomb passage, which was once a descending slope, have a length of approximately 1.6 metres and a width of 1.8 metres. The entrance to the tomb measures 7 metres in length and 4.82 metres in width while the base of the tomb measures 6.2 metres by 4.12 metres. 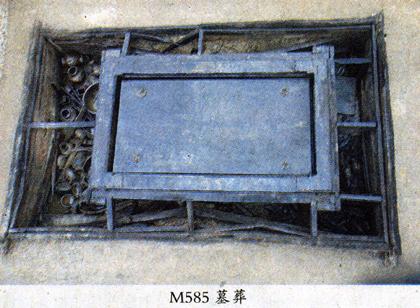 Tomb M585, like Tomb M566, consists of an outer storage chamber and a burial chamber containing a triple coffin. The outer storage chamber and inner chamber were both covered by nine interconnected horizontal planks aligned along a north-south axis. The outer storage chamber is divided into four separate sections at each of the four cardinal points (north, south, east and west). Wooden columns supporting cross beams were found erected at intervals along the four sides of the storage chamber. Storage lockers were placed along the cross beams while roof boarding was found beneath them. The inner coffin was found enshrouded in a two-layer funerary shroud decorated with a diamond design. Two wooden supports aligned along the north-south axis were found buried beneath the floor of the burial chamber. With the exception of the middle coffin and the standing boards on both sides outward arc, the burial chamber, outer coffin and inner coffin form a rectangular box-like structure. As in Tomb M585, mortise and tenon joints were used to join the various wooden planks together. The compacted variegated soil found within the tomb pit was composed of the same blueish grey clay found in Tomb 585 and its tamping sandy layers are approximately 12 to 15 centimetres thick. An iron implement dating from the Warring States period and used in the construction of the tomb was found buried in the soil in the south-eastern corner of the burial chamber. The remnants of the tomb passage measure 4.14 metres long and 3.4 metres wide and the entrance to the tomb is approximately 8.6 metres long and 6.2 metres wide. The base of the tomb measures 7.4 metres by 5.92 metres. 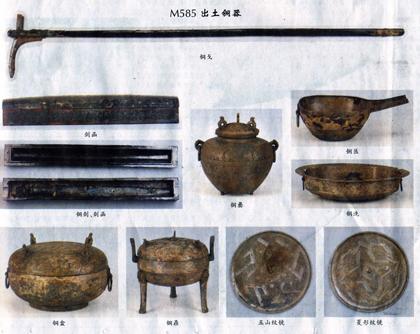 A grand total of two hundred and forty-one artifacts made of bronze, pottery, lacquer ware, jade and horn have been discovered amongst the remains of the two tombs. The majority of the funerary objects were found within the outer storage chambers, though a set of jade objects were found inside the inner coffin in Tomb M566. No funerary objects were found inside the inner coffin in Tomb M585.
A hundred and thirty-three objects were excavated from Tomb M566. This includes twenty-six bronze artifacts, which were mostly found in the south-western section of the eastern and the southern outer storage chamber, including bronze mirrors, lamps, incense burners, yi bowls, basins, flat spoons, ding tripods, zeng steamers, fu cauldrons, yan steamers, hu pots, three-legged wine vessels, and boxes.
Fifty-seven pieces of pottery were found in the northern outer storage chamber. Among the items were rectangular fu food containers, spherical dun grain receptacles, containers and basins, hu wine vessels, ding tripods, pottery jars, square fang wine vessels, water bowls, zeng steamers, stemmed dou bowls, pottery ladles, and flat spoons.
Thirty-two items of wooden lacquer ware were discovered in the eastern outer storage chamber and in the south-eastern section of the southern outer storage chamber. These included a number of lacquer boxes, eared lacquer cups, small lacquer ware tables and lacquered lian toilet boxes.