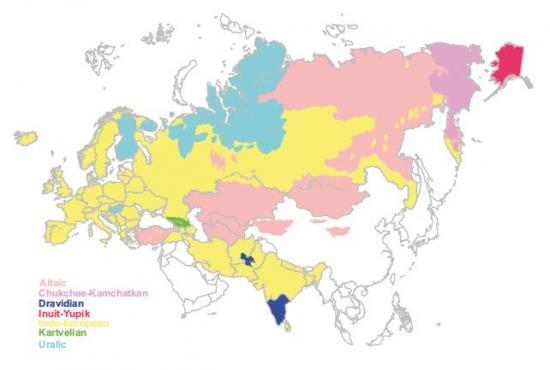 Map showing approximate regions where languages from the seven Eurasiatic language families are spoken. The color-shaded areas should be treated as suggestive only, as current language rangeswill not necessarily correspond to original homelands, and language boundaries will often overlap. For example, the Indo-European language Swedish is spoken along with the Uralic Finnish in southern Finland. Credit: PNAS doi: 10.1073/pnas.1218726110

A team of linguistics experts from the U.S., Great Britain and New Zealand has found evidence that suggests a core group of words used in a common language thousands of years ago has survived to this day. In their paper published in Proceedings of the National Academy of Sciences, the researchers claim that some core words used in modern languages are related to some spoken 15,000 years ago.

Most people realize that all languages are constantly evolving—new words are added and others are lost and some even undergo changes in pronunciation. For that reason, it would seem surprising to find that some commonly used words have survived—albeit in modified form—for as long as perhaps 15,000 years. That's what the researchers in this new effort have found. They believe that people speaking a single language in early Eurasia used a core group of words that are found in most present-day, subsequently evolving languages.

The team acknowledges that most in the field believe that words don't survive any longer than eight or nine thousand years—there's just too much "weathering." But their research shows otherwise.

Most language experts agree that a "proto-Eurasiatic" language existed and was spoken by a wide group of people in Europe and parts of Asia thousands of years ago. That language eventually evolved into English, German, Spanish, Italian, etc. Until now however, most in the field have agreed that as the languages matured, words from the old language were lost. The researchers on this new effort disagree, and they say it's all based on "cognates"—words that have basically the same meaning in different languages and sound similar as well.

In this new effort, the research team has been studying cognates and their use in several modern languages. They've also been comparing them with the 200 standard words that linguists agree are core to virtually all languages. And finally, they also looked at "proto-words"—words that researchers make up when attempting to define cognates in long-dead languages.

After careful analysis and comparison, the researchers arrived at a list of cognates that appear to not only exist in all modern languages that evolved from the proto-Eurasiatic language, but that actually existed in the early language, as well. Put another way, words like "father" or "fish," or at least their cognate forms, have been in use for at least 15,000 years.

The search for ever deeper relationships among the World's languages is bedeviled by the fact that most words evolve too rapidly to preserve evidence of their ancestry beyond 5,000 to 9,000 y. On the other hand, quantitative modeling indicates that some "ultraconserved" words exist that might be used to find evidence for deep linguistic relationships beyond that time barrier. Here we use a statistical model, which takes into account the frequency with which words are used in common everyday speech, to predict the existence of a set of such highly conserved words among seven language families of Eurasia postulated to form a linguistic superfamily that evolved from a common ancestor around 15,000 y ago. We derive a dated phylogenetic tree of this proposed superfamily with a time-depth of ∼14,450 y, implying that some frequently used words have been retained in related forms since the end of the last ice age. Words used more than once per 1,000 in everyday speech were 7- to 10-times more likely to show deep ancestry on this tree. Our results suggest a remarkable fidelity in the transmission of some words and give theoretical justification to the search for features of language that might be preserved across wide spans of time and geography. 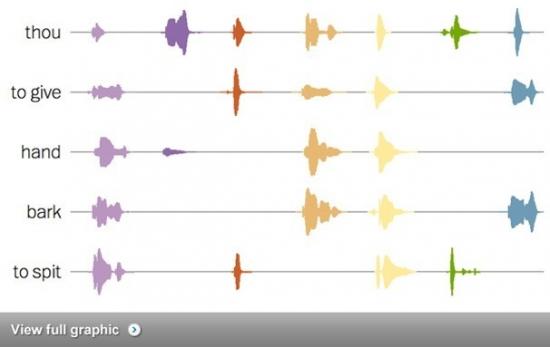 Graphic: Hear and see the pronunciation of words from their ancient language families =