Lincoln Castle (G-B): Skeleton found beneath Castle could belong to a Saxon king

A skeleton found in Lincoln Castle is believed to belong to a Saxon king or bishop and dates back to around 900AD, according to archaeologists.

The skeleton was discovered in a stone sarcophagus, or coffin, buried three metres below the castle alongside eight other bodies in wooden coffins.

One skeleton appears to have been originally wrapped in a finely woven textile and this material suggests that the bones were part of a 'votive deposit' - when holy relics are placed within a wall to dedicate the building and create a sacred place for religious people to visit.

A skeleton found buried inside a stone coffin below Lincoln Castle could belong to a Saxon king or a bishop dating back to around 900AD, according to archaeologists. They have used endoscopic cameras to inspect the fragile remains. It was discovered alongside eight other skeletons in wooden coffins, pictured

The finds were found in a small area - around 3 metres by 3 metres - currently being excavated by the archaeologists for the construction of a lift shaft.

The team has been carrying out DNA examinations of the eight skeletons.

They also hope to do a digital reconstruction of the skeleton in the sarcophagus.

Archaeologists uncovered the side of the coffin but have not been able to access the lid because of how deep it is buried.

They fear the coffin could disintegrate if it is moved because of the change in environmental conditions.

Instead, archaeologist Cecily Spall and Justin Garner-Lahire from Field Archaeology Specialists (FAS) Heritage inserted an endoscopic camera into the coffin to see what it contained.

This camera also discovered other items buried in the coffin which appear to be gold.

Mary Powell from Lincoln Castle said: 'We think it's somebody terribly important, possibly a bishop or a Saxon king.

'We know so little about the Saxon period and Saxon coffins are very rare.

'We are all excited about lifting the lid and seeing who is in there and what is buried with him.'

Martin Carver, professor at the University of York said: 'The most important thing is to get a close look at what’s inside the stone coffin.

Archaeologist Cecily Spall, pictured, uncovered the remains while digging beneath the castle to install a lift shaft. According to the University of York, Saxon coffins are rare. The team has been carrying out DNA examinations of the eight skeletons and plan to do a digital reconstruction of the skeleton in the sarcophagus

'The Romans used stone coffins (sarcophagi), including Christian ones in the 4th century AD, and the early Christian English re-used them in the 7th. But Late Saxon stone coffins are pretty rare.

It would certainly be good to see if this coffin has a decorated lid – but more than that, if the coffin has an occupant we can bring the tool box of modern forensic archaeology to bear and find out more about them: place of birth, diet, health, wounds, date of death and more.

'This is a wonderful find.'

As explorations continue, archaeologists believe the remains all belong to a stone church built after the Romans left and before the Norman conquerors came.

During this period the English and the Danes competed for supremacy in Northern England. 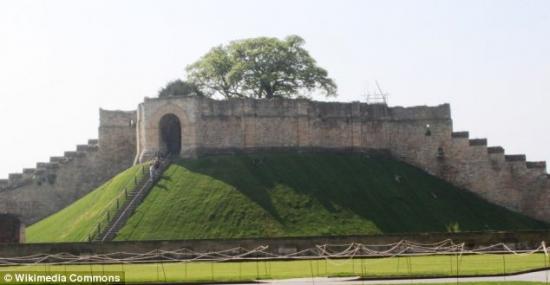 The discovery was made while archaeologists excavate the location as part of the Lincoln Castle Revealed project. The plans want to create a visitor attraction at the venue, pictured, including an underground vault to display the Magna Carta. It is expected to be open by 2015 for the 800th anniversary of the Great Charter

'Our knowledge of the site between the end of Roman period and when the castle was built is very scant.

'While the discovery was totally unexpected, it is well known that other Roman walled towns often contained some form of high-status use during the Anglo-Saxon period.

'This will greatly increase our knowledge not just of the castle, but of uphill Lincoln as well. 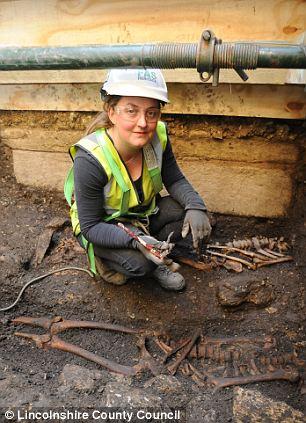 Archaeologists, including Cecily Spall, pictured, believe the remains all belong to a stone church built after the Romans left and before the Norman conquerors came

It's a major find and we look forward to future developments.'

The £19.9m Lincoln Castle Revealed project plans to create a visitor attraction at the venue, including an underground vault in which to display Lincoln's Magna Carta.

The archaeologists will now be using radiocarbon dating to try and refine the date of the remains, which from the stratigraphy and associated artefacts already uncovered appear to be 10th century or earlier.

Lincoln’s earliest church St Paul in the Bail was in the area of the Roman forum, probably built in the 7th century, but a body buried in its dedication grave was removed in the 10th century for burial somewhere else.

This is thought to be the church built by Blaecca, chief man of Lincoln at that time.

The Late Saxon cathedral, built 300 years later, has always been assumed to be under the present minster, but the church under the castle is showing signs of being an important high status church.

Further historical research as well as the ongoing archaeological work may give clues to whether it might be a Saxon minster, or belong to an adjacent monastery or palace.

FAS Heritage are being employed by Lincolnshire County Council to help prepare the castle for its rebirth as a major tourist attraction.

The archaeologists are also digging near the prison where another rich historical sequence from the 19th century back to Roman times is being investigated.

These results will form part of a final exhibition at the castle expected to open in 2015 in time for the Magna Carta's 800th anniversary.

Meanwhile the public are welcome to visit and view the excavation near the prison, which also employs local volunteers.