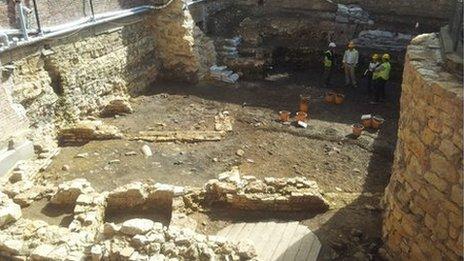 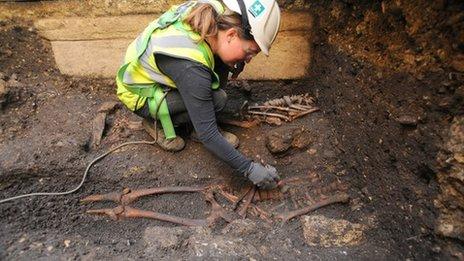 Several human skeletons were found by the archaeologists 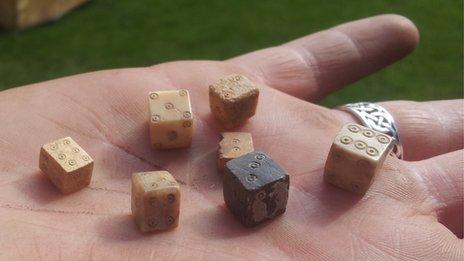 Artefacts include dice thought to date from the 12th Century

Archaeologists are preparing to extract a sarcophagus discovered at Lincoln Castle and thought to contain "somebody terribly important".

The stone sarcophagus, believed to date from about AD900, was found alongside the remains of a church which was previously unknown.

Archaeologists have been on site for almost a year and their work came to an end this week.

They believe the sarcophagus could contain a Saxon king or bishop.

Archaeologist Cecily Spall said: "There's lots of careful planning to do in the next few weeks but as I say we do hope to get it out and have a look inside.

"Logistically it's quite a difficult job because the trench is deep and the sarcophagus obviously weighs a lot."

Lincoln Castle is being refurbished and the archaeologists have been digging where a new centre to house the Magna Carta will be built.

As well as the sarcophagus, several other human skeletons were found alongside remains of the church, which is thought to be at least 1,000 years old.

Ms Spall said: "It's very unusual for archaeologists to encounter a church which hasn't been detected in historical documents."

The team also found remains of a stone Roman townhouse, which is thought to have been demolished in the 9th or 10th Century.

Some of the finds will go on display at the castle.

They date from the 4th Century up to the 20th Century.

The older artefacts found include pottery, cooking pots, animal bones, ice skates, and dice made from animal bone and antler.