Life and death in Pompeii and Herculaneum

A loaf of bread which was put in the oven in AD79 and removed from it in the 1930s, and a charred baby's cradle which still rocks almost 2,000 years after its owner died, are some of the objects coming to the British Museum this spring for its exhibition on one of the most famous disasters in history: the eruption of Vesuvius.

As well as the objects which surrounded them in life, there will be casts made from the bodies of those who died in 79AD, when the monstrous eruption blew off the entire top of the mountain and engulfed the Roman towns of Pompeii and Herculaneum.

The six casts of those who died choking in the ash which fell like snow or were poisoned by noxious gases, include the most famous dog from the ancient world, frozen in time writhing against its collar and the rope which still tied it to a stake as it died. It was found just a few yards from an equally famous mosaic, which is also coming, originally guarding the threshold of a house in Pompeii, of a prancing red-collared black and white dog with the warning Cave Canem.

Among thhe items coming to the exhibition are the remains of an entire family, two adults and two children, found cowering under a staircase in Pompeii. The casts were made in a technique invented in the 19th century to preserve the most moving testimony to the catastrophe by pouring plaster into the voids in the ash left as bodies decomposed, preserving the people as they fell – covering their heads, curled up like babies, or struggling to shelter a child.

The two towns were different in life and death. Herculaneum was overwhelmed by a fiery pyroclastic flow hot enough to evaporate human flesh, so fast and furious that charred food remained on carbonised tables from meals that were never eaten. The town was buried 80 feet deep, and only a third of it has been excavated. Pompeii choked more slowly, and the tops of buildings were left sticking out of the ash field, so as early as Roman times people burrowed into the ruins for building materials and works of art.

Pompeii was the larger and more racketty town, full of bars and brothels, Herculaneum wealthier and quieter. It was as if Brighton and Hove, had randomly remained as evidence of modern British culture, said British Museum director Neil MacGregor.

Despite the display of bodies and the poignant objects the citizens snatched up as they tried to flee a collapsing cloud of ash and gas towering 19 miles into the sky above their heads, curator Paul Roberts, head of Roman collections at the museum, said the emphasis would be on everyday life in the towns, not death. 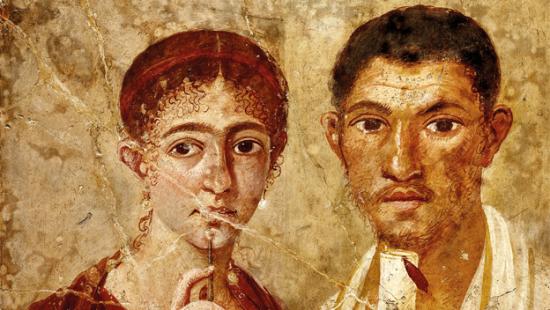 Real faces of the living inhabitants will include an imposing bronze bust of a banker and money lender, who was also a freed slave as up to half the population may have been. A vivid wall painting portrays a baker, Terentius Neo, and his wife: his wife is nameless but, as MacGregor remarked, she looks much the brighter of the two, standing slightly in front of him and holding a writing tablet – striking evidence of her literacy and status.

The exhibition comes after the international outcryfollowing building collapses at Pompeii two years ago, which led to some calling for the sites and collections to be removed from Italian state control.

MacGregor and Roberts praised the relationship with the Italian authorities in charge of the museum in Naples and the two sites as a true collaboration: the Italians are charging no loan fees, and have allowed unprecedented access to treasures, including sending six pieces of Herculaneum furniture, when no more than two have ever left the country together. Roberts praised the "outstanding work" being done at the sites.

The body casts, which include one woman who was cast in resin instead of plaster so that her bones are visible, will be shown in a separate section at the end. "We recognise that for some people the idea of death will be the most challenging element of the exhibition, but we would prefer that people not avoid the bodies," Roberts said.

He said he found some previous exhibitions of the casts distasteful, when they were shown in lurid lighting or with melodramatic music.

"These are real people, and we will treat them with the greatest respect. If these people had not died, we would not have this exhibition."