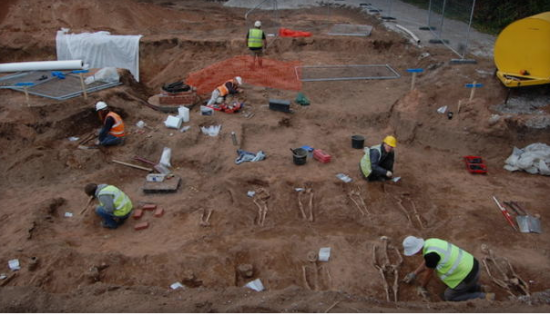 Archaeologists found the shallow graves during a construction project in August. The graves are relatively shallow — just about 1.6 feet below ground. -  ARCHAEOLOGY WARWICKSHIRE/WARWICKSHIRE COUNTY COUNCIL

The skeletal remains of about 50 medieval individuals have been discovered in shallow graves near the pilgrimage site of a famous seventh-century saint in England.

The human remains, which have been exhumed, may help archaeologists learn more about the medieval era, according to Archaeology Warwickshire, an archaeology and excavation firm. The company plans to study each skeleton to determine its sex and approximate age, and to identify evidence of injuries or diseases preserved in the bones, said Stuart Palmer, the business manager of Archaeology Warwickshire.

"The teeth will give us a lot of information about diet, as well," Palmer told Live Science. "There's a potential for more in-depth study, but we first have to assess the quality of material to see if it's worth trying to do." [See Photos of the Medieval Graves near Lichfield Cathedral]

Archaeologists with the firm discovered the burials in early August. They received a commission to survey the land around an almshouse, located outside the gates of the medieval city of Lichfield, located in the West Midlands. During medieval times, pilgrims traveled to Lichfield to visit its famed three-spired cathedral from the 12th century, which held the tomb of St. Chad.

Lichfield closed its city gates every night about 9 p.m., and pilgrims who arrived after that time would have stayed in the almshouse, called the Hospital of St. John Baptist without the Barrs (the barrs referred to the city gates). 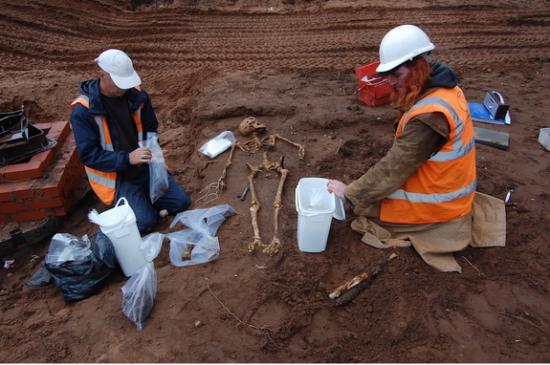 Archaeologists excavate a grave near Lichfield Cathedral. Most of the remains of the people in the graves show that the individuals were buried lying on their backs. -  ARCHAEOLOGY WARWICKSHIRE/WARWICKSHIRE COUNTY COUNCIL

Archaeology Warwickshire surveyed the grounds around the almshouse this summer, just before a planned expansion of the compound. The archaeologists expected to find some graves but "we weren't really expecting the volume and quantity that we got," Palmer said.

Perhaps there were so many bodies because St. Chad had a large following -- the English clergyman founded the monastery at Lichfield, served as its abbot and bishop and is credited with converting the ancient English kingdom of Mercia to Christianity, according to the Encyclopedia Britannica. After he died of the plague in A.D. 672, the church canonized him as a saint, and people reported miracles taking place at his tomb in Lichfield, according to the Encyclopedia Britannica.

It's unknown whether the pilgrims ever made it inside the city walls to see St. Chad's tomb. During medieval times, pilgrims traveled far and wide to see relics, often bones, of saints.

"People came from miles to see them," Palmer said. "They're [supposed to have] some curative quality to them -- maybe you'll get to see some good in heaven or on the way to heaven."

The buried individuals -- adults and children alike -- may have hoped that the power of the relics would cure them of an ailment, Palmer said. But some of them passed away during their travels. The graves are shallow, some no more than 1.6 feet deep. Most of the individuals were laid flat on their backs, arranged in rows, and covered with dirt, he said.

Archaeology Warwickshire received a yearlong permit from the Ministry of Justice to study the remains, but many of the skeletons are not in good shape because they were buried in acidic soil, which is typical of dirt in the area, Palmer said.

If the bones are in good condition, the archaeologists may analyze their DNA and isotopes (variants of a particular element), which can tell researchers where the pilgrims lived previously. After that, the skeletons will go to a museum, he said.