Now we continue our report on the recently discovered ancient tomb cluster in Northeastern China's Liaoning Province. Among them, tomb Number M-40 is the largest in scale among the 2000-year-old group of tombs. Now let's see what's been found inside.

Earlier, archaeologists found treasured accessories from the tomb owner's coffin. After that, when the coffin was removed, a lot of pottery pieces appeared at the bottom of the tomb. Coming in various shapes, the pottery items are believed to serve as sacrificial vessels.

Most of the items bear colored painting on their surfaces. But their outlines resemble those of bronze wares. 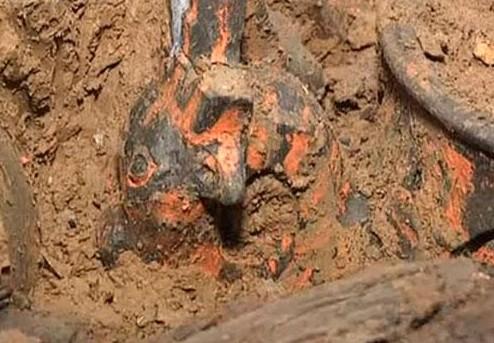 Hua Yubing, deputy director of Liaoning Institute of Archaeology, said, "In general, the appearance of these pottery items are exactly the same with bronze wares made in the Warring States Period. Beneath the colored paintings, we also found delicate veins that looked like those on bronze wares. "

According to historic records, in spite of their importance in Chinese culture, bronze vessels were largely replaced by those made of pottery in the late Warring States Period. It is now further evidenced by the finds in this tomb. 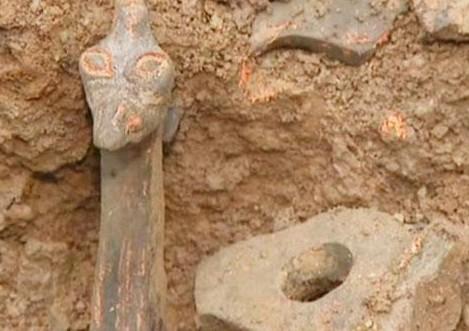 Hua Yubing said, "It showed that the tomb owner preferred colored pottery items, which became the new fad back then. But the influence of bronze wares was still strong. This tomb reflects the gradual transition of funeral customs in ancient China. "

These pottery pieces could provide crucial clues leading to the social status of the tomb owner and the exact year he was buried.

Now the biggest challenge faced by the archaeologists is how to protect the painting on the pottery items from losing their lustre.