Abstract: The carpals from the Homo floresiensis type specimen (LB1) lack features that compose the shared, derived complex of the radial side of the wrist in Neandertals and modern humans. This paper comprises a description and three-dimensional morphometric analysis of new carpals from at least one other individual at Liang Bua attributed to H. floresiensis: a right capitate and two hamates. The new capitate is smaller than that of LB1 but is nearly identical in morphology. As with capitates from extant apes, species of Australopithecus, and LB1, the newly described capitate displays a deeply-excavated nonarticular area along its radial aspect, a scaphoid facet that extends into a J-hook articulation on the neck, and a more radially-oriented second metacarpal facet; it also lacks an enlarged palmarly-positioned trapezoid facet. Because there is no accommodation for the derived, palmarly blocky trapezoid that characterizes Homo sapiens and Neandertals, this individual most likely had a plesiomorphically wedge-shaped trapezoid (like LB1). Morphometric analyses confirm the close similarity of the new capitate and that of LB1, and are consistent with previous findings of an overall primitive articular geometry. In general, hamate morphology is more conserved across hominins, and the H. floresiensis specimens fall at the far edge of the range of variation for H. sapiens in a number of metrics. However, the hamate of H. floresiensis is exceptionally small and exhibits a relatively long, stout hamulus lacking the oval-shaped cross-section characteristic of human and Neandertal hamuli (variably present in australopiths). Documentation of a second individual with primitive carpal anatomy from Liang Bua, along with further analysis of trapezoid scaling relative to the capitate in LB1, refutes claims that the wrist of the type specimen represents a modern human with pathology. In total, the carpal anatomy of H. floresiensis supports the hypothesis that the lineage leading to the evolution of this species originated prior to the cladogenetic event that gave rise to modern humans and Neandertals. 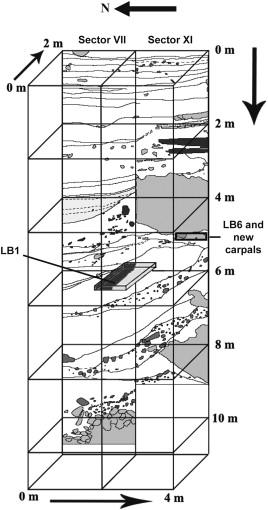 Figure 1. Stratigraphic context of the Liang Bua carpal specimens. The cranium, mandible, and postcranial material of LB1, including the wrist bones, were recovered in 2003 from Sector VII, whereas in 2004 more limb elements of LB1 were recovered from Sector XI (dark and light rectangles show the respective approximate positions of recovery). Elements attributed to a second, smaller individual (LB6) were recovered from spits 50–53 of Sector XI. The new carpals (LB 20, 21, and 22) also derive from these spits from sediments in the southeast corner of Sector XI (black rectangle).

Figure 2. Images of the Liang Bua capitates with characters highlighted that are plesiomorphic relative to modern Homo sapiens and Neandertals. Specimen LB1–45 is from the left side, but its image is reflected for ease of comparison with LB20, which is a right capitate. Note the overall similar anatomy of the two specimens, but the smaller size of LB20. Plesiomorphic characteristics shown include the following: excavated radial side with no enlarged palmar trapezoid facet (A); palmar cupping of the Mc3 facet (B); a scaphoid articulation that forms a J-hook distally (C); minimal beveling to accomodate an Mc3 styloid process (D); and a more radially-oriented Mc2 facet (E). 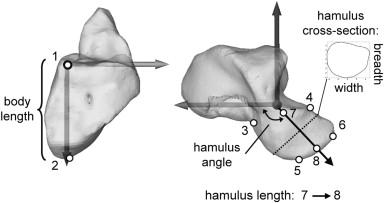