A hoard of more than Anglo Saxon 5,000 coins have been unearthed, including what may be a unique penny. The discovery, near Lenborough, Buckinghamshire is said to be the biggest hoard of coins in modern times. It includes a uniquely-stamped coin which may be the results of a mix-up at the mint, more than 1,000 years ago. 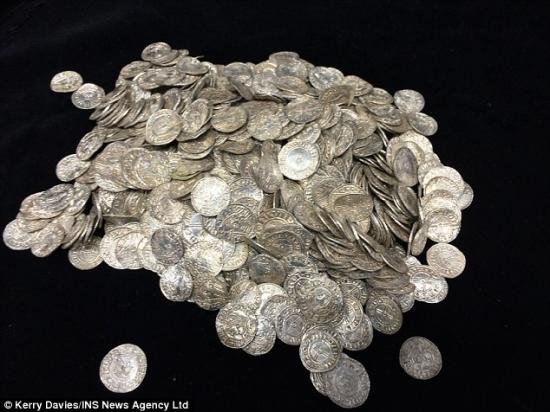 No valuation has officially been placed on the coins, which have formerly been declared as treasure trove, but some experts believe they could be worth more than £1 million.

The 5,248 coins were found by metal detector enthusiast Paul Coleman on December 21 last year. He almost decided not to dig the site when his metal detector beeped, believing he had come across a hidden manhole cover. However, his persistence was rewarded when he found the silver pennies, which were buried in two sets, possibly up to 15 years apart, based upon the dates imprinted on them. He told a treasure trove inquest in Beaconsfield: ‘I wasn’t going to go [hunting for treasure] but I was talked into it. 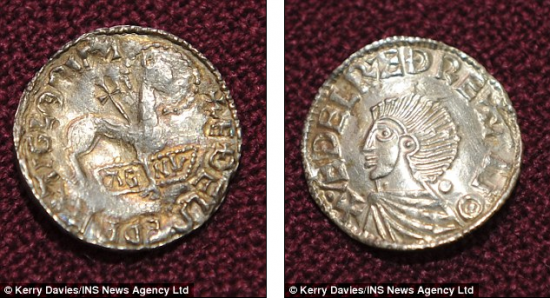 The hoard includes a uniquely-stamped coin which may be the results of a mix-up at the mint, more than 1,000 years ago. One showing an animal is pictured on the left, and another from the the reign of Ethelred the Unready in the 990s is pictured right
‘We looked at the aerial photos and chose a field because there were strange markings. We decided to leave the field because there was nothing in it.

‘When the detector started beeping, it felt like the size of a manhole cover and that’s also what caused me to nearly not dig it up. Anything of that size is normally a manhole cover or a squashed bucket.’

Mr Coleman, who is 60 and retired, believes it was fate that caused him to wander over to where the hoard was buried. He chose a different route because choosing his Deus detector was receiving interference from one belonging to another member of the Weekend Wanderers metal detecting club. He first found 985 coins dating from the reign of Ethelred the Unready in the 990s and a further 4,263 that were minted during the reign of his successor, Canute.

The coins were taken to the museum in Aylesbury before then being sent to the British Museum for further analysis.

Brett Thorn, keeper of archaeology at the Buckinghamshire County Museum, told the treasure inquest: ‘Normally hoards are fairly small - 10 to 20 coins, something of that order.

‘The largest came in the 1840s, containing 7,000 plus silver objects, and one was recorded in the late 90s. This find is the only modern one which is comparable to those.'

He believes the coins were buried on the way to a mint in Buckingham five miles (8km) away in order to be melted down and re-cast.

New coins were minted every few years, with the holders of old coins having to pay a tax if they tried using them.

Alternatively, Mr Thorn said the money could have been the savings of a single family over the course of 20 years.

Despite the age gap between some of the coins, he told the inquest: ‘There’s no doubt they were deposited at the same time.’

He said that one of the coins - an Agnus Dei coin containing a lamb and flag – is possibly unique.

‘It’s a mis-struck coin. The lamb should have on the reverse a dove of peace. This doesn’t; it has a short cross.

‘Someone has made a mistake but it is still good silver. They still sent it out.

‘It makes the coin a rare mistake among a group of unique coins.’

Such coins were issued towards the the end of Ethelred’s reign and were a plea to God to protect them from the Vikings.

Just 30 Agnus Dei coins had ever been discovered and 25 of those were in Scandinavia.

There have also been just 30 Saxon coins discovered in the area over the course of 150 years because most of them were taken back with the Vikings.

Recalling the moment the hoard was brought into the museum, Mr Thorn said: ‘It was just phenomenal. I came in on Monday morning and there was an email about a hoard of 5,000 coins. I thought it was a typo - you don’t get hoards of that scale, ever. I assumed it meant to say 50; even 500 would be exceptionally exciting.

‘It was a massive amount and I couldn’t believe the condition they were in. The ones I looked at initially were in excellent condition.

‘The first thing we did was phone the British Museum and we drove them down to London that day.

‘Word had spread around the department this was coming in and when we arrived everyone was going “is that the hoard?" They were as excited about it as we were.

‘This is a massively significant find, which is why we were really pleased the British Museum said they were happy to let us have it.

‘It’s the most sensible place for it - in Buckinghamshire, where it was found.’

The museum will need to raise a percentage of the coins’ total value in order to put them on display, with an official valuation expected tin the New Year.

Mr Thorn said analysis of the coins showed they had been minted in 40 different locations around the country.

Two examples of coins from the hoard
Some of the coins were inscribed with the name Coleman, prompting their finder to say: ‘I joked that the hoard had my name on it - I didn’t realise it literally did.

Mr Coleman, who lives in Southampton, Hampshire said: ‘The whole thing has been surreal the whole time.’

He has been pursuing his hobby for 50 years and said: ‘I’ve found Roman coins, medieval coins and quite a few medieval broaches, the stuff that keeps you interested.

‘The biggest thrill is when you find the personal things like a brooch that an individual has worn - if only you could read the story that went with it. It’s like holding a bit of history.”

Peter Welch, who runs the Weekend Wanderers club, told the Buckinghamshire coroner: ‘This won’t be repeated. I have never had anything like this in 25 years of running the club.’

Coroner Richard Hulett ruled that the hoard should be counted as treasure after hearing the coins were made of more than 10 per cent silver - the minimum level needed to satisfy modern treasure laws.

A lead ‘basket’ which contained the coins - which fell apart during the excavation - was also ruled as treasure after fragments of it were preserved.