The large art panel combines many figures of herbivores, some as big as 1.5 metres, as well as two 'very rare,' exceptionally preserved figures of felines

Archeologist Juan Carlos López Quintana had planned on spending a quiet first of May in the seaside town of Lekeitio in northern Spain. Lowering himself through a narrow, 8-metre deep well-like opening and into an unexplored cave definitely wasn’t what he’d had in mind — but what he saw there more than made up for any discomfort. He’d thought the cave, which a group of speleologists had just forced their way into, might contain sediments (traces of human activity like bones and tools), but his modest expectations were outdone by far: Just 50 metres from the entrance lay an impressive panel of paleolithic art, perfectly preserved.

“The drawings were clearly visible [to the naked eye], they were spectacular,” says López Quintana.

The conservation of the panel, made up of more than fifty paleolithic rock engravings, is “exceptional,” says Marcos García Díez, prehistory professor at the University of the Basque Country. The cave, located under a building complex, had been known to locals for a long time. Its entrance had been open for centuries, and children went to play there until the 1970s, when construction waste blocked access. “Caves under urban areas are normally quite badly preserved, or they collapse entirely,” García Díez says — which explains López Quintana’s surprise at finding the panel, thought to be 14,500 years old, intact. “This part of the cave is not difficult to explore from the original entrance,” says López Quintana, but, luckily, it appears untouched. “Can you imagine, it could have ended up covered in graffiti.”

The art provides a remarkable picture of life in the 125th century BCE. Abstract symbols found in the cave (the first known to have been made using a particular engraving technique) indicate that the people who made it shared artistic sensibilities and travelled across what is now France and Spain. This cave alone represents displacements of up to 800 km, says García Díez. Bison, goats, and horses roamed Iberia and so did an extinct subspecies of lion: The large art panel combines many figures of herbivores, some as big as 1.5 metres, as well as two “very rare,” exceptionally preserved figures of felines. Carnivores, and lions especially, are almost never encountered in paleolithic art, says prehistory professor César Gonzalez Sainz from the University of Cantabria, who was the one to date the art, and remains closely involved in the exploration of the cave. This art is a rare testimony to the artistic skills of our ancestors — part of a 14,500-year-old story that still has “more than one surprise” in store, as López Quintana says.

García Díez refers to the two representations of felines, with a third figure still to be determined, as a “singularity.” “Some say it could be a hyena, some say a lion, but in any case it’s definitely a carnivore,” says López Quintana. Predatory animals, and lions especially, are unusual in paleolithic art. “These people generally tend to paint what they consume and lions are linked to danger,” García Díez explains.

One of the lion figures is, beyond doubt, the best preserved in Cantabria, he says. “You can see it very clearly, [the lion’s] little ears, two very strong forelegs, its tail raised.” Lions raise their tail when they run, for stability, says Marián Cueto Rapado, an archeologist whose recent work focuses on prehistoric lions. “Prehistoric people knew not just the animals’ form, but also what their postures meant; they could tell if an animal was relaxed or tense, and they were able to capture this magnificently in their art. She says that these feline figures are most likely cave lions, a subspecies of lion that lived in the Eurasian continent during the late Pleistocene period. These lions were larger in size than the African lions we’re familiar with, and the males didn’t have a mane. 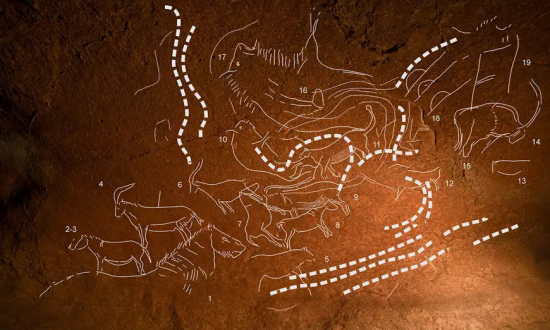 The panel, with outlines showing the art more clearly. Note the abstract symbols (the lines, and semi-circles), shown in the dotted lines.

But prehistoric humans’ intimate anatomical knowledge of lions didn’t only come from observation: they hunted them for their skin and, according to Cueto Rapado, contributed to their extinction. “Prehistoric people were skilled hunters; moreover, the human population grew in that period, and lions competed with humans for food, and also for spaces to live. [Both lived in caves.] So human activity exerted pressure on cave lions until they finally became extinct, around 14,000 years ago,” she says.

This art is all the more significant, says García Díez, because it is “exemplary” of an unusual, easily damaged, engraving technique that rarely survives so “perfectly visible.” While most cave art is painted or made by scratching fingernails on the wall, this technique consists of dragging an object on the wall to create lines rather than grooves, resulting in a sophisticated “cameo” or trompe l’oeil effect, which looks painted-on rather than engraved, González Sainz says.

It is not yet understood what the purpose of prehistoric art was, but this discovery shines a light on the surprising intensity of the cultural exchanges between distant populations. According to García Díez, the engravings in the Lekeitio cave fall under a recognized “school” of art, the naturalists, whose art from that time period is seen in a number of places, spanning from the edge of the Cantabria region in Spain to the middle of what is now France. The abstract symbols engraved on the walls, consisting of 30 to 40 cm lines adjacent to semi-circles, also link these different peoples, says González Sainz. Engravings of those symbols had never been found in Cantabria before, but they have been found in the Pyrenees.

These feline figures are most likely cave lions, a subspecies of lion that lived in the Eurasian continent during the late Pleistocene period

“The walls of this cave account for displacements of 700 to 800 km,” García Díez explains — an impressive range when you consider that humans still travelled exclusively by foot. Cueto Rapado says, “These people were nomads: they chased animal packs and moved along whenever food became scarce in one area. They had no way of knowing how far from home they were going!”

That’s only a portion of what the cave has to tell us. Gonzalez Sainz says the panel that was found combines many figures, which are often tangled or partially superimposed — so detailed study is needed to unpack all of the information. And the cave itself still has many secrets waiting to be uncovered: Most of the upper level, where this panel was found, remains unexplored, and López Quintana is confident that more discoveries will follow.

But it’s going to be a long process. Access to the cave is difficult and it is a very humid, unhealthy environment, as a river flows through its lower levels. So far, López Quintana says only nine people have (officially) been inside (not counting the speleologists, who explored the lower and middle levels of the cave, but kept away from the art), including a 3D-imaging team. So while it’s almost certain that the cave won’t be made accessible to the public, an exposition that opened recently in the nearby city of Bilbao allows viewers to tour the cave virtually and to explore every detail of the art with the help of special glasses. For archaeologist López Quintana, who is eager to go back, it’s a matter of remaining patient: The cave is still being made ready for exploration, so archaeological work isn’t expected to resume before the new year.