Lejre (Danemark): Feasting and fighting: the long-lost secrets of Beowulf

Beowulf is depicted in his battle against Grendel

The dark secrets of the legend of Beowulf, England’s oldest work of epic literature, are gradually emerging from under a field in eastern Denmark.

Archaeologists in the country’s  earliest royal ‘capital’ – Lejre, 23 miles  west of modern Copenhagen – are investigating the joys of  elite Dark Age life in and around what was probably the great royal feasting hall at the violent epicentre of the Beowulf story. 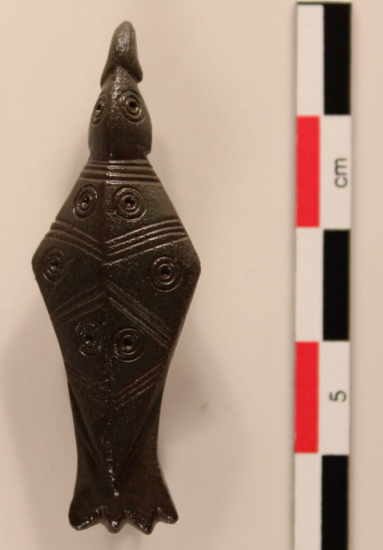 A bronze brooch from Lejre, depicting a bird, dating from the sixth century

The archaeologists – led by Tom Christensen, director of the Lejre investigation – have so far managed not only to find, excavate and date the late 5 or early 6 century building most likely to have been Lejre’s first royal hall (described in Beowulf as `the greatest hall under heaven’), but have also succeeded in reconstructing what was on the menu at the great feasts held there.

Scientific study this year of the bones of literally hundreds of animals found near the hall, shows that they feasted on suckling pig, beef, mutton, goat meat, venison, goose, duck, chicken and fish.

Other finds from around the hall have included fragments of glass drinking vessels, 40 pieces of bronze, gold and silver jewellery, pottery imported from England and the Rhineland – and the wing of a sea-eagle, whose feathers may well have been used for fletching arrows. Twenty other gold items were found just a few hundred metres away. 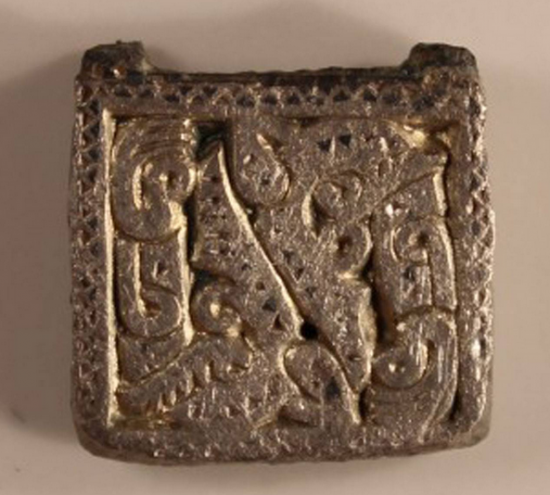 A tiny, silver and gold-covered bronze box in the form of a pendant, decorated with dragon-like motifs, from Lejre, dating from the sixth century, the era associated with the ‘Beowulf’ legend

The discoveries, reported in the current issue of BBC History Magazine, are of international importance.

“For the first time, archaeology has given us a glimpse of life in the key royal Danish site associated with the Beowulf legend’’, said project director Dr. Christensen,  curator of Denmark’s Roskilde Museum, four miles from Lejre.

The Danes plan to put the finds on permanent display next year at Roskilde and Lejre Museums.

In the Beowulf legend – which is believed to have influenced some aspects of Tolkien’s Lord of the Rings and was turned into a 150 million dollar Hollywood film six years ago – a young nobleman from southern Sweden goes to neighbouring Denmark to save its ruling elite from the depredations of a monstrous man-eating giant called Grendel. The monster had entered the Danish king’s great feasting hall at Lejre, while the king and his warriors had been sleeping off an evening of feasting and drinking, and had succeeded in devouring a number of them.

On meeting the king, Beowulf offers to rid the land of the monster. The king accepts – and Beowulf waits alone in the great hall for the giant to attack again. In the epic battle between the two that then ensues, the giant is defeated and retreats to a cave beneath a nearby lake where he is finally killed by Beowulf.

As well as investigating the hall most likely to have been the one associated with the Beowulf legend, the archaeologists have found, excavated and dated six other royal feasting halls in Lejre.

They have discovered that the early Danish monarchy used each hall for only a few generations, before dismantling them and building a new one – usually on  or very near the same site as its predecessor. Detailed examination of the buried remains of successive feasting halls has shown that they were used between around 500 and 1000 AD.  All were roughly  on the same site – except for the one associated with the Beowulf legend which was 500 metres to the north.

It may be that the change in location was somehow connected with events described in the legend, part of which actually states that the early royal hall, was in fact abandoned – because of the depredations of Grendel.  Whether Grendel (meaning quite literarily ‘the destroyer’) originally existed in some less legendary form – perhaps symbolizing a malevolent spirit responsible for disease and death, or a particularly fierce-looking human enemy – is as yet unknown.

The quasi-legendary high status individual that Beowulf is based on probably lived in the 6 century AD. The story of his exploits was most likely brought to England by Scandinavian (potentially southern Sweden originating) settlers in the 6 or early 7 century AD.  The poem was then written by an anonymous Anglo-Saxon poet, probably sometime in the 7th or  8 centuries.