Leicestershire (G-B): skeletons have been holding hands for 700 years 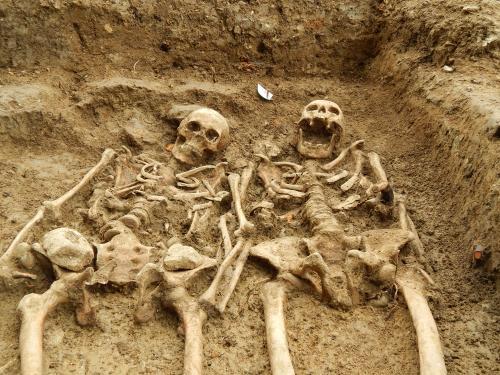 A couple who have been holding hands for 700 years have been uncovered at the ‘lost’ chapel of St Morrell in Leicestershire. Credit: University of Leicester Archaeological Services

Some relationships last a lifetime – and University of Leicester archaeologists have discovered that they can last even longer after unearthing two skeletons at a lost chapel in Leicestershire that have been holding hands for 700 years.

The happy couple refused to be parted by death when they were discovered by a team of archaeologists from the University of Leicester Archaeological Services (ULAS) working with local volunteers during an excavation at the Chapel of St Morrell in Leicestershire, a site of pilgrimage in Hallaton during the 14th Century.

The four year excavation project with the Hallaton Fieldwork Group (HFWG) has revealed the full plan of the chapel as well as the cemetery and evidence that the hillside has been used since at least the Roman period.

As well as the touching skeletal union, the excavations have also identified the walls and tiled floor of the chapel as well as fragments of stone masonry, wall plaster, tiles and lead from the windows. A number of silver pennies dating between the 12th – 16th centuries have also been found on the site indicating when the chapel was in use.

Vicki Score, ULAS project manager, said: "'We have seen similar skeletons before from Leicester where a couple has been buried together in a single grave. The main question we find ourselves asking is why were they buried up there? There is a perfectly good church in Hallaton. This leads us to wonder if the chapel could have served as some sort of special place of burial at the time." 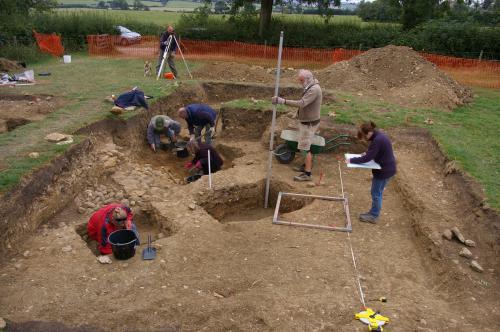 Members of the team excavating and recording the chapel and the cemetery. Credit: University of Leicester Archaeological Services. Credit: ULAS

The team believe the chapel may have been an area of pilgrimage. Alternatively, the bodies might have been refused burial in the main church, perhaps because they were criminals, foreigners or sick.

A total of 11 skeletons have been excavated so far, all orientated east-west in the Christian tradition and radiocarbon dated to the 14th century. 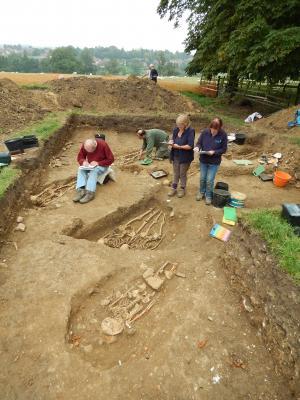 Members of the team excavating and recording the chapel and the cemetery. Credit: University of Leicester Archaeological Services. Credit: ULAS
Roman archaeology found beneath the medieval chapel suggests that the hilltop, which is the starting point for the Hare Pie Scramble and Bottle Kicking, has been a special place for over 2000 years.