The camp discovered by Armageddon is the only full-scale Roman legionary base found so far in the East: It housed the 'Ironclad' Sixth Legion, a cremated comrade in a cooking pot, and a Sacred Eagle, whose birdly squawks would be interpreted as portents of war
Philippe Bohstrom

Source - https://www.haaretz.com/archaeology/1.831317
A monumental gate and dedicatory inscription in Latin are among the finds unearthed at the vast Roman military encampment discovered at Legio, near Tel Megiddo in northern Israel. The huge gate led to the principia, or headquarters.

The existence of the camp categorically proves the assumption, which had been based on multiple sources, that ancient Rome maintained a massive military presence in the Galilee some 1,900 years ago.

The camp at Legio (also known as Lajjun) dates to the 2nd and 3rd centuries C.E. Today covered by crops, then it was home to the famous Sixth Legion.

The Legio camp is the only full-scale imperial Roman legionary base found so far in the eastern empire, Matthew J. Adams, director of the W.F. Albright Institute and co-director of the dig, told Haaretz.
Camps of the sort are familiar from the western empire, and given the extent of local Roman presence, other major bases are likely to eventually be found in the east.

The monumental gate to the principia at Legio Yotam Tepper
For example, a full-scale Roman Legion was known to have been based in Aelia Capitolina, the colony Emperor Hadrian had built on the ruins of Jerusalem following the city's destruction in 70 C.E. However, that legion's base hasn't been found, at least yet.
The base that has been found, at Legio,  was about 300 by 500 meters in area and housed the Legio VI Ferrata, a.k.a. the "Ironclads," a.k.a. the Roman Sixth Legion.

The legion's task was to secure Rome's hold over Syria-Palaestina, guard vital imperial roads, and maintain order in the region. It was probably also involved in quelling Jewish uprisings, such as the fateful Bar-Kokhba Revolt that began in 132 C.E. and would end three years later, in categorical Roman victory. 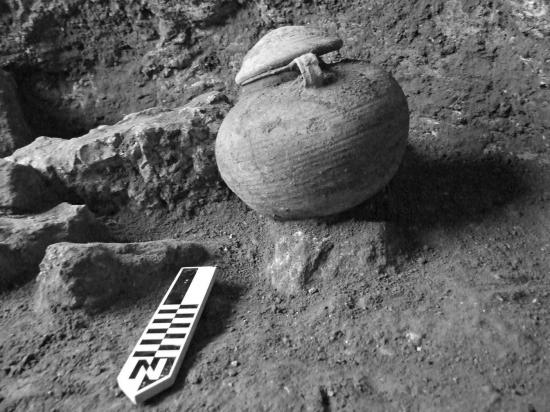 Roman cooking pot with the remains of a cremated Roman Legionary, found at the Roman military camp discovered at Legio, by Tel Megiddo Yotam Tepper
Meanwhile, the camp by Tel Megiddo, which has been explored from 2014 to 2017 by Dr. Yotam Tepper of Haifa University and the Israel Antiquities Authority, sheds light on how the Roman army organized its affairs in the east as well.

The bloody history of the Ironclad Legion

The entire might of Rome was based on its legions. These were independent units, each a complete army in itself, rather than a specialized portion of a greater force.

Sometimes legions fought together, merging their resources and strength under a central command, as when four legions combined under Titus for the siege of Jerusalem, 70 C.E. to crush the Jewish rebels once and for all. But usually each legion stood alone with its individual commission of duty.
The number of legions serving Rome varied at different times, from 25 or less to as many as 33. Likewise, the number of soldiers comprising the legion fluctuated from about 4,000 to 6,000. In the second and third centuries C.E., the force usually numbered 5,000.

In the Levant that long ago, around 1,900 years, cities with 5,000 people would be considered large.

A Roman tile from Legio, bearing the footprints from legionary sandals Yotam Tepper
As for this region specifically, by the reign of the Roman emperor Hadrian (117-138 C.E.), two imperial legions were stationed in the consular province of Judea: the Legio X Fretensis in Aelia Capitolina, and Legio VI Ferrata in the Galilee – the so-called "Ironclad" Legion.

“The Sixth Roman Legion Ferrata had a great and bloody history going back to the days when Julius Caesar first recruited it in northern Italy," says Barry Strauss, professor of History and Classics at Cornell University. "The legion fought in some of Caesar’s most famous battles in what are today France, Greece and Turkey, including the victory that Caesar immortalized with the words, 'I came, I saw, I conquered.'"
Originally stationed in Syria, the Ironclad Region had served under Marcus Antonius. Commonly known as Marc Antony, the Roman general was famed for military exploits and his close relationship with Julius Caesar, following whose death he ruled Rome as part of a trimvurate, with Caesar's adopted son Octavian and another general, Marcus Aemilius Lepidus.

Octavian took over command of the Ironclads after the  Battle of  Actium in 31 B.C.E.

For his part, Antony was also famed for marrying Emperor Octavian's sister Octavia but was especially famed for committing adultery with the Egyptian queen Cleopatra. He would die in 30 B.C.E.
In any case, the legion had moved from Syria to the Legio base well before the Bar-Kokhba revolt in 132 C.E. Legio is quite near the Jewish-Samaritan village of Kefar 'Othnay, where an excavation conducted by Tepper, on behalf of the Israel Antiquities Authority, revealed the earliest Christian prayer hall in the Holy Land (dating to the early third century C.E.), and perhaps in the entire region.

The prayer hall may well have served early converts to Christianity among the Roman centurions, Tepper says.

This Sixth Legion also fought for Septimius Severus, the winner in the civil war of 193 C.E., who would rule as Roman emperor from that year to 211.

Bronze scales from Roman army armor, found at the Legio military base by Tel Megiddo Courtesy of the Jezreel Valley R
By the time Constantine took power in 306 C.E., the legion had been relocated to what is today, Jordan.  But wherever it was based, it was sent to serve as needed: from road-building duty in North Africa to fighting in various eastern campaigns in Armenia and Mesopotamia, says Strauss. But before that, through much of the 2nd and 3rd centuries C.E., the fearsome Legio VI Ferrata was stationed in Judea.
PART.2