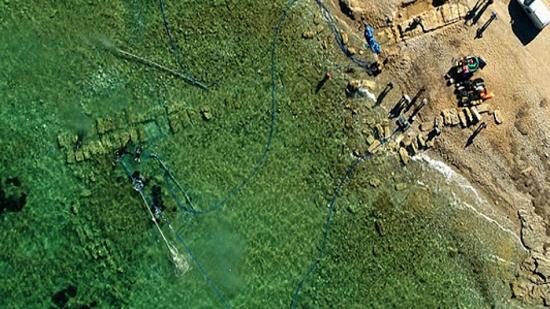 An ancient Greek port was revealed and recorded at the location of the Ancient Lechaion harbor, in the area of the modern Corinth Gulf, in the Peloponnese.
The submerged ancient port covered a total area of 2,750 square meters. It ran 911 meters along the modern Corinth Gulf coastline and the entrance channel to the port lay on the harbor’s eastern part. The channel is 8.9 meters wide while a western and a middle mole were also found west of it.

The port played a pivotal role in Corinthian history, as it was located about 3 km west of Ancient Corinth and faced the West with its busy sea routes. The role of Corinth has been very important throughout antiquity. 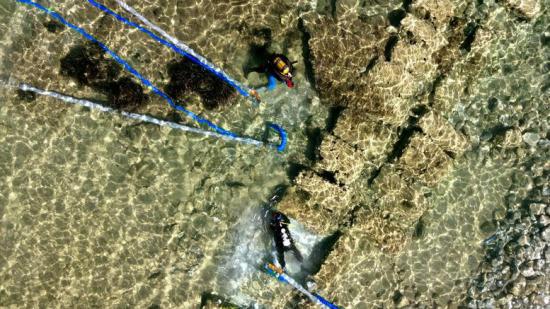 The Culture ministry of Greece announced the results of the 2013-2014 excavation season, conducted by the Underwater Antiquities Ephorate of the ministry, the SAXO Institute of the University of Copenhagen and the Danish Institute in Athens.

The excavators worked with the University of Patras on geologic research using what the latter call a “3D parametric sub-bottom profiler”, an invention that will process the data to give a detailed map of the stratigraphy in the area.
Research has been funded in 2014 by the Augustinus Foundation of Denmark and supervised by Dr. Dimitris Kourkoumelis and Dr. Bjorn Loven.

As the Ministry of Culture announced, at the entrance channel, eight caissons – or watertight retaining structures – were found, filled with small and medium-sized pebbles mixed with mortar made for marine structures. These unique structures, found nowhere else in Greece, point to plans to expand the port by adding another mole.

The “3D Parametric sub-bottom profiler” is expected to provide a lot of information of the coastal development and how it has evolved through time, but it is also expected to reveal still-buried sections of the harbor or submerged objects.