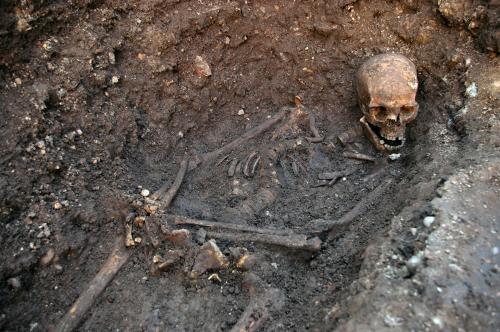 This image shows human remains found in a trench on one of the Grey Friars digs. Credit: University of Leicester

This is in keeping with accounts from the medieval historian Polydore Vergil, who said Richard III was buried "without any pomp or solemn funeral".

'The king in the car park': new light on the death and burial of Richard III in the Grey Friars church, Leicester, in 1485 is the first academic paper to be published on the University of Leicester's Search for Richard III.

It outlines the key findings from the archaeological investigation of the Grey Friars site.

It includes analysis of Richard III's grave and explains the conclusions about the friary's layout based on the remains of the church and cloisters.

It also includes initial observations of the King's skeleton.

The paper was written by key members of the University's Search for Richard III, including lead archaeologist Richard Buckley and Grey Friars site director Mathew Morris.

The authors state in the paper: "The Grey Friars Project has been unusual in the nature of the collaboration between professional and academic archaeologists, an amateur group (the Richard III Society) and the City of Leicester. However, this also means that the project has addressed two different but overlapping sets of research questions, not all of which specialists would routinely ask.

"Projects developed in this way may become more common in future as non-specialists increasingly become users, stakeholders and participants in academic research. What is somewhat different from the ways in which archaeological professionals and amateurs have generally worked together is that in this case the non-specialists played a role in shaping the intellectual frameworks of the project, although the final project design (including how questions could appropriately be asked of the evidence), and the execution of the project in practical terms remained in the hands of the archaeologists.

"Grey Friars offers a case study for addressing the issues of how to formulate multiple sets of research questions and aims, and how different kinds of partners can accommodate each other's questions.

"The paper highlights the fact that this was a public archaeology project initiated by Philippa Langley, a member of the Richard III Society, and executed by a team of archaeologists and other specialists from the University of Leicester."

They conclude: "At this stage we have discovered enough of the plan of the Grey Friars precinct to feel confident that we have identified parts of the eastern range, the chapter house and the eastern end of the church, including the transition between the choir and the presbytery.

"This means that the hastily constructed grave in Trench 1 is certainly in the place indicated by the fifteenth- and sixteenth-century written sources as the tomb of King Richard III.

"The radiocarbon dates, evidence on the male skeleton of severe scoliosis, trauma consistent with injuries in battle and potential peri-mortem 'humiliation injuries', combined with the mtDNA match with two independent, well-verified matrilineal descendants all point clearly to the identification of this individual as King Richard III. Indeed, it is difficult to explain the combined evidence as anyone else.

"This result is the most important one for our non-specialist partners, as well as for millions of people around the world, and addresses their key questions."

The paper acknowledges the support of the Richard III Society, Leicester Shire Promotions, Leicester City Council and others.

Commenting on the paper Professor Chris Scarre, editor of Antiquity, said: "This discovery has been a focus of major public interest and debate, and we are delighted to publish the details of the excavation that have helped lead the team to their conclusion."

The full outcomes from the bone analysis and DNA tests will be published in subsequent papers.