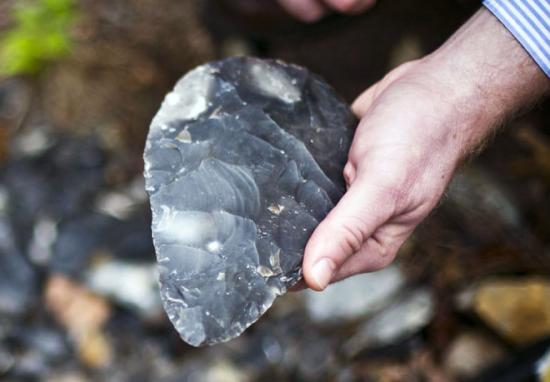 Scientists believe that Stone Age toolmaking might have links to the development of language. Bryan Meltz, Emory Photo/Video

Our ancestors started making tools at around the same time they learned to speak, and some scientists believe that the two skills share the same neurological pathways. To test this hypothesis, a team of researchers is going to monitor the brains of modern people as they learn how to make Stone Age-style hand axes.

The study, led by archaeologist Dietrich Stout of Emory University in Atlanta, will train 20 people for 100 hours each in a technique called knapping, where the toolmaker strikes a piece of crystalline material like flint or obsidian with “hammerstone” made from quartzite. (This video shows the basics.) Stout and his co-investigators will use several methods to monitor how tool making overlaps with language. One of the most important will be MRI scans.

The basic hypothesis, he says, is that the way our brains approach physical tasks—like making a hand axe—has a syntax analogous to the way our brains approach language. To establish a base line for how language activates the brain, the researchers will give their subjects MRIs while they listen to a story. Then, they’ll take MRIs of their brains as they learn knapping, and observe whether the steps of tool making (closing a hand around a rock, banging it against another rock) activate the same areas as parts of language (translating sounds into words, and words into sentences). They’ll also use eye-tracking tests, individual measurements for planning and working memory, and video analysis of tool-making sequences.

There won’t be many restrictions on who is eligible for enrolling in the study, only that they be 18-50 years old, have no history of neurological illness, and no prior experience making stone tools (Sorry, Brendan Frasier). Additionally, they need to be right handed, Stout said, “Because things get complicated in the brain with variation in handedness.” If you meet these criteria, and want to spend the next three years making hand axes, you can apply to join the study.

Michael Ullman, a neuroscientist at Georgetown University who studies links between language development and motor skills, says that the team’s hypothesis linking tools and language is plausible. But, he has doubts about their methodology. “Why are they comparing someone’s learning process with tool making with the use of a language they already know and learned as a child?,” he wonders. He says the study’s co-investigators could do better by comparing learning to make tools to learning a new language (i.e, a second/foreign language). Ullman also questioned the team’s decision to have the subjects learn to make stone age tools, saying that it felt “a bit gimmicky,” as opposed to something more modern.

Stout says that the original proposal for the project included having the subjects learn an artificial language, but that component got cut because of funding restrictions. As for the choice of the hand axe, he concedes that he could have gone with a more contemporary technology, but wanted to be able to relate his findings to the things that he digs out of the ground. “I’m an archaeologist by inclination and training, and I want to study an ancient technology that might have helped shape the evolution of the modern brain.” The style of stone axes he’s having his subjects learn to make originated about 500,000 years ago, around the same time many archaeologists believe our ancestors were beginning to develop language.