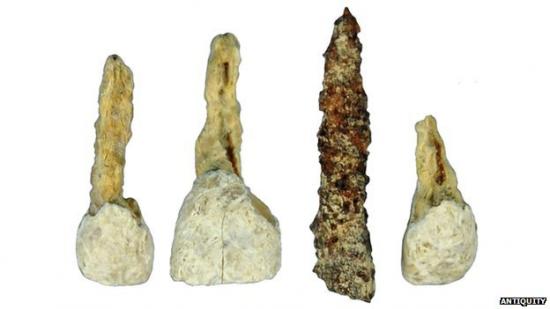 The iron pin may once have held a false tooth, but it's impossible to know for sure – Antiquity

Archaeologists have identified what could be remains of the earliest false tooth found in Western Europe.

The dental implant comes from the richly-furnished timber burial chamber of an Iron Age woman that was excavated in Le Chene, northern France.

The woman, who was between 20 and 30 years old when she died, had an iron pin in place of an upper incisor tooth.

It is possible the pin once held a false tooth made from either wood or bone, which could have rotted away.

The findings have been published in the scholarly journal Antiquity.

The grave was one of four adult female burials in an enclosure dating to the third century BC that were discovered during the construction of a housing development in the Champagne-Ardenne region.

The burials, which contained a rich array of grave goods, show all the hallmarks of the Celtic La Tene culture, which flourished across Central and Western Europe at the time.

"But the teeth were in an anatomical position, with the molars, pre-molars, canines and incisors. Then there was this piece of metal. My first reaction was: what is this?"

The teeth were bagged and taken away for analysis. Mr Seguin later realised that the woman had 31 rather than 32 teeth, and photos taken at the excavation site show the iron pin in the place where the missing tooth would have been. 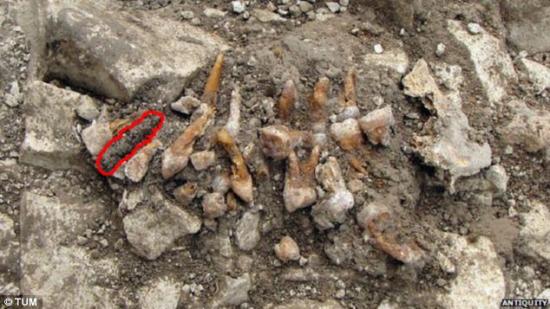 This photo shows the teeth in position during excavation. The iron pin is visible on the left

"The fact that it has the same dimensions and shape as the teeth means that the best hypothesis is that it was a dental prosthesis - or at least, an attempt at one," said Mr Seguin, from the Bordeaux-based archaeology firm Archeosphere.

There are reasons to doubt whether it was successful, says Mr Seguin. Firstly, the propensity for iron to corrode inside the body makes it unsuitable for use as a dental implant; titanium is the material of choice today for modern versions.

Secondly, the absence of sterile conditions during this period mean the pin could have caused an abscess, followed by an infection that could potentially have ended the individual's life.

However, the poor preservation of the remains means it is impossible to say whether the implant played any role in the woman's death.

While the find may be the earliest dental implant known from Western Europe, prosthetic teeth dating back 5,500 years have been found in Egypt and the Near East.

However, most are believed to have been inserted after death to restore the appearance of the deceased.

The researchers cannot completely rule out a post-mortem insertion of the pin in this case either. But they argue that several converging lines of evidence point to its use during life as an implant.

But it remains impossible to say for certain whether the pin once held a replacement tooth made of bone or wood, both of which could have perished in the acidic soil.

In Antiquity, Mr Seguin, along with co-authors from the University of Bordeaux, wrote that the burials "convey the image of a social elite concerned about their appearance".

They also note that the date of the burials coincides with a period when the Celtic Gauls were in contact with the Etruscan civilisation of northern Italy.

The Etruscans were known for their relative mastery of dentistry, although the partial dentures inserted into gold bands and fitted onto existing teeth represent a different approach to dental restoration than that seen in third century Gaul.