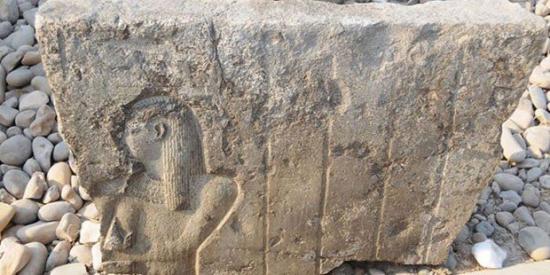 Ruins Of The Unearthed Temple. Courtsey Of Antiquities Ministry

Ruins of a 2,400 year-old shrine were unearthed from beneath Cairo’s modern district of Mataria, Antiquities Minister Mamdouh el-Damaty announced Monday.

“The finds were discovered during the ongoing excavation work carried out by an Egyptian-German archaeology mission. The shrine belonged to the 30th Dynasty Pharaoh Nectanebo I (379 B.C.-360 B.C.,)” said Damaty.

The mission also unearthed remains of limestone colonnade and a “well-preserved” ceiling that are strongly believed to have been a part of an ancient Egyptian temple, Damaty said, adding that ruins of the mud brick outer enclosure wall surrounded the temple, along with royal bust belonged to the New Kingdom (1580 B.C.-1080 B.C.) Pharaoh Merenptah, were also excavated in the area.

Nectanebo I was the founder of the 30th Dynasty: the last native Egyptian royal family to rule ancient Egypt before Alexander the Great conquered Egypt in 332 B.C., Archaeologist Sherif el-Sabban told The Cairo Post.

Archeology surveys carried out in Heliopolis have previously revealed prehistoric human settlements under this part of the modern city of Cairo, said Damaty.

Little remains of what was once one of the ancient Egyptians’ most sacred cities, since much of the stones used in the construction of the temples were later plundered and reused in building modern buildings, according to Sabban.

Heliopolis, known in ancient Egypt as Iunu, was Egypt’s most ancient capital city.

“The area was first excavated in the early 20th Century and most of the finds ended up in private collections. The obelisk of the Middle Kingdom Pharaoh Senusert I, probably the oldest standing obelisk in Egypt, is among the most significant excavations at the area,” according to Sabban.