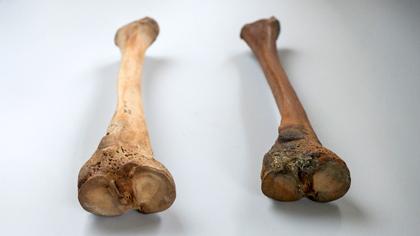 Two bone specimens taken from sailors on board the Mary Rose. One bone (darker) has rickets and the other (lighter) does not© Royal National Orthopaedic Hospital

New scientific analysis using laser technology on the tibias of the crew of Henry VIII’s Mary Rose suggests many of the sailors had rickets from an early age, suffering bone disease caused by the poor diet many people had during the 16th century.

Raman spectroscopy – a non-destructive technique described as “pioneering” by experts from the Royal National Orthopaedic Hospital in north London – showed that the abnormally-shaped bones, which were compared with anatomically healthy remains from the 1545 shipwreck, carried metabolic diseases and chemical abnormalities typical of rickets. 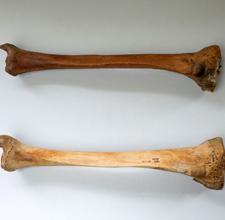 “This is the first time that this laser technology has been used to study bone disease in archaeological human bone,” says Dr Jemma Kerns, a Clinical Study Manager at the hospital and University College London.

“We have identified chemical changes in the bones without damaging them.

“There is strong evidence to suggest that many of the sailors had suffered from childhood rickets and we hope to apply the Raman technique to the study of modern day rickets.”

Experts hope to use Raman as a tool for understanding the prevalence of metabolic bone disease in ancient populations such as the 400 men aboard the Mary Rose, which sank in a summertime battle on the Solent, where the silt environment kept their bodies in remarkable condition.

The technique could be used to detect current conditions after a Faculty of Public Health leader suggested diseases usually associated with the Tudor era are becoming more common due to poverty and malnutrition.

“The Mary Rose Trust has the responsibility for the remains of over 179 individuals who perished with the ship," says Alex Hildred, the trust’s Curator of Human Remains.

“Their provenance is absolute; they represent the crew of an English warship in July 1545.

“The human remains have potential to make a contribution to the public through research, education, display and interpretation.

“Their use to confirm the presence and prevalence of metabolic bone disease in the 16th century is one of these contributions.”

The results of the study, which was funded as part of a £1.7 million grant by the Engineering and Physical Sciences Research Council, have been published in the Journal of Archaeological Science.