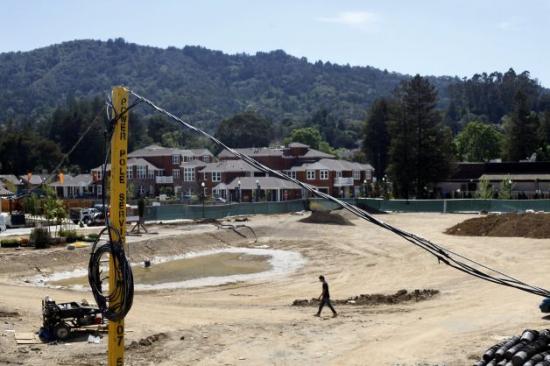 The $55 million Rose Lane development in Larkspur is being built on the site of a 4,500-year-old Indian burial mound. The Federated Indians of Graton Rancheria opted to rebury and pave over the artifacts found. Photo: Lacy Atkins, SFC

A treasure trove of Coast Miwok life dating back 4,500 years - older than King Tut's tomb - was discovered in Marin County and then destroyed to make way for multimillion-dollar homes, archaeologists told The Chronicle this week. 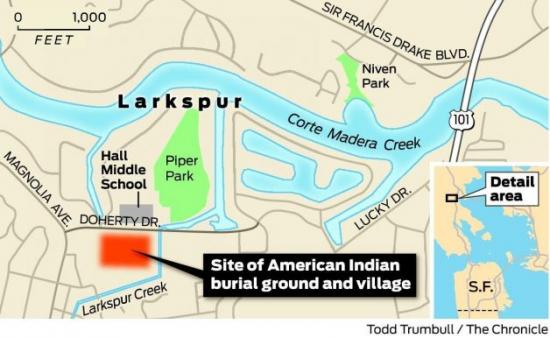 The American Indian burial ground and village site, so rich in history that it was dubbed the "grandfather midden," was examined and categorized under a shroud of secrecy before construction began this month on the $55 million Rose Lane development in Larkspur.

The 300-foot-long site contained 600 human burials, tools, musical instruments, harpoon tips, spears and throwing sticks from a time long before the introduction of the bow and arrow. The bones of grizzly and black bears were also found, along with a ceremonial California condor burial.

"This was a site of considerable archaeological value," said Dwight Simons, a consulting archaeologist who analyzed 7,200 bones, including the largest collection of bear bones ever found in a prehistoric site in the Bay Area. "My estimate of bones and fragments in the entire site was easily over a million, and probably more than that. It was staggering."

No artifacts were saved

All of it, including stone tools and idols apparently created for trade with other tribes, was removed, reburied in an undisclosed location on site and apparently graded over, destroying the geologic record and ending any chance of future study, archaeologists said. Not a single artifact was saved.

Lost forever was a carbon-dated record in the soil layers of indigenous life going back approximately to the time the Great Pyramid of Giza was built in Egypt. It was, said several prominent archaeologists, the largest, best-preserved, most ethnologically rich American Indian site found in the Bay Area in at least a century.

The shell mound was first documented in Larkspur in 1907, but no one knew its significance until a developer decided to build homes, prompting an examination of the grounds.

The development was approved by the city in 2010, but the developer, Larkspur Land 8Owner LLC, was required under the California Environmental Quality Act to bring in archaeologists to study the shell mound under the direction of American Indian monitors before it could build.

The developers hired San Francisco's Holman & Associates Archaeological Consultants to conduct an excavation, and that firm spent the past year and a half on the site, calling in 25 archaeologists and 10 other specialists to study aspects of the mound. As required by the environmental act, their work was monitored by the Federated Indians of Graton Rancheria, who were designated the most likely descendants of Larkspur's indigenous people.

The American Indian leaders ultimately decided how the findings would be handled, and they defended their decision to remove and rebury the human remains and burial artifacts.

"The philosophy of the tribe in general is that we would like to protect our cultural resources and leave them as is," said Nick Tipon, a longtime member of the Sacred Sites Protection Committee of the Federated Indians of Graton Rancheria. "The notion that these cultural artifacts belong to the public is a colonial view."

But Eerkens and several other top archaeologists said a lot more could have been done to protect the shell mound. The problem was that the work was done under a confidentiality agreement, so little was known about it until March when some of the archaeologists discussed their work during a Society for California Archaeology symposium in Visalia.

It was too late by then to preserve the site and, by all accounts, the archaeologists at the symposium were stunned.

"In my 40 years as a professional archaeologist, I've never heard of an archaeological site quite like this one," said E. Breck Parkman, the senior archaeologist for the California State Parks. "A ceremonial condor burial, for example, is unheard of in California. This was obviously a very important place during prehistory."

The developer, Larkspur planning officials and officials at Holman & Associates all pointed to tribal leaders.

"We coordinated the entire time with the tribe and the archaeological team to make sure it was a collaborative effort and that things were handled in accordance with the tribe's wishes," said Brian Olin, the senior vice president for New Home Company, which is part of a joint venture with Larkspur Land 8.

Miley Holman, the owner of the archaeological firm, referred all inquiries to the American Indians, as did Neal Toft, the Larkspur planning director.

"The city did not participate or oversee any of the archaeological digs or discovery," Toft said. "The Federated Indians of Graton Rancheria managed the oversight along with a qualified archaeologist. We were not apprised or assessed of any significant finds, and in fact we kept out of it."

Greg Sarris, the chairman for the 1,300-member tribe, was far from apologetic about what happened to the archaeological site. It is nobody else's business, he said, how the tribe chooses to handle the remains and belongings of its ancestors.

"Our policy is that those things belong to us, end of story," said Sarris, whose tribe recently opened the Graton Resort & Casino in Rohnert Park. "Let us worry about our own preservation. If we determine that they are sacred objects, we will rebury them because in our tradition many of those artifacts, be they beads, charm stones or whatever, go with the person who died. ... How would Jewish or Christian people feel if we wanted to dig up skeletal remains in a cemetery and study them? Nobody has that right."

The protection of cultural sites has been a prickly topic for decades in the Bay Area, where American Indian shell mounds were once abundant around San Francisco Bay. There is often tension, and there are sometimes courtroom battles, between American Indians, who generally want ceremonial items left alone, and archaeologists who want to collect and preserve ancient artifacts and village sites for science.

State and federal laws attempt to balance the two - protecting cultural sites and giving American Indians a say over what happens - but in most cases a private-property owner can't be forced to protect a cultural site.

The new homes, on a 22-acre former tidal estuary of Corte Madera Creek, across from Hall Middle School in central Larkspur, will include 42 senior housing units, eight senior cottage homes, six affordable-housing town houses and 29 single-family homes. They are expected to go on the market in the fall for $1.9 million to $2.5 million.

Nondisclosure agreements are relatively common when dealing with Indian burials because of the historical problems American Indians have had with looters, grave robbers and vandals, but the archaeologists believe the developer was behind the secrecy.

"The developer was reluctant to have any publicity because, well - let's face it - because of 'Poltergeist,' " said Simons, referring to the 1982 movie about a family tormented by ghosts and demons because their house was built on top of a burial ground.

They also question Larkspur planning officials, who could have protected the mound by ordering a redesign or mandating construction of a cap over the site. Critics suspect planning decisions were influenced by the fact that Larkspur is getting out of the deal a 2.43-acre piece of land to build a community center.

"It's like the fox watching the henhouse," said Al Schwitalla, an archaeologist hired by Holman & Associates to analyze artifacts at the site. He said radiocarbon dating was arbitrarily limited and DNA testing was prohibited, a move that prevented confirmation of a genetic link to Graton Rancheria tribe members.

A draft report is being prepared documenting what was found inside the Larkspur mound, but the actual items are lost to science and future study. That includes atlatl throwing sticks, which were used for hunting before the bow and arrow. There were also thousands of shells and the bones of bat rays, waterfowl, deer, sea otters and some 100 grizzly and black bears. Archaeologists say the remains of the condor, a species revered by the Miwok, could be an indication that the birds were kept as pets, possibly for their feathers.

There were also antler tools, flutes, beads, bone awls, hairpins, game pieces and ritualistic stone objects apparently used to trade for obsidian and beads from Napa-area tribes, according to archaeologists.

"There are a lot of things that went wrong here," Eerkens said. "It's really a shame."