Lapa do Santo (Brésil) : Rock art discovery could shed light on when New World was settled

A carving of a stick figure discovered by archaeologists in a cave in Brazil is believed to be the earliest example of rock art in the Americas and could shed new light on when the New World was first settled. 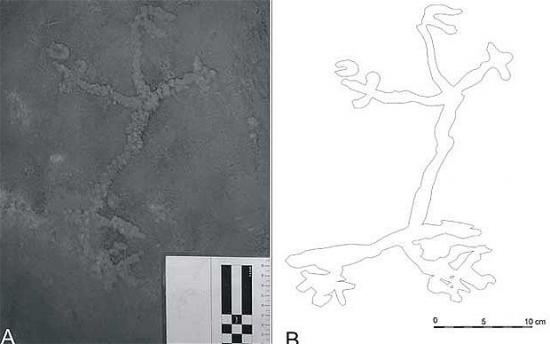 The team of archaeologists from the University of Sao Paulo in Brazil made the discovery during excavations in 2009 but unveiled their findings in this month's PLoS ONE scientific journal.

"It shows that about 11,000 years ago, there was already a very diverse manifestation of rock art in South America, so man probably arrived in the Americas much earlier than normally is accepted," explained Walter Alves Neves, the archaeologist and biological anthropologist leading the team.

The figure, which appears to be squatting with his arms outstretched, is about 12 inches tall from head to feet and about 8 inches wide. The phallus is about 2 inches long, about the same length as the man's left arm.

Carbon dating and other tests of the sediment covering the petroglyph suggest the engraving dates between 10,000 and 12,000 years old – making it the oldest reliably dated example of such rock art found yet in the Americas.

In the same series of caves, researchers discovered buried human remains, tools made of stone and bones, ash from hearths, and leftovers from meals of fruit and small game.

The region is also the site of the discovery of the oldest human skeleton found to date in South America - a 20-year-old female nicknamed Luzia.

A reconstruction of her face, based on her skull and its distinctive characteristics, showed Luzia had a cranial morphology almost identical to Australian Aborigines, challenging the theory that the Americas were first settled by people of Asian origin.