Gruesome evidence of funerary rituals that involved mutilation, removal of muscles and teeth, and possibly cannibalism of fresh corpses has been uncovered in Brazil, according to an international team of researchers.

Unearthed at Lapa do Santo, a cave in east-central Brazil, the 9,500-year-old remains provide the oldest documentation of humans performing complex funerary rituals in the region.

"In the absence of monumental architecture or grave goods, parts of fresh corpses were used in elaborate rituals," André Strauss, at the Erberhard-Karls Universität in Tübingen, Germany, said.

Starting between 10,000 and 10,600 years ago, Lapa do Santo was used as a place of burial of complete bodies. Between 9,400 and 9,600 years ago more complex funerary rituals took place, featuring what Strauss and colleagues call "manipulation" and "reduction" of the corpses.

Such techniques included "mutilation, defleshing, tooth removal, exposure to fire and possibly cannibalism," the researchers wrote in the journal Antiquity. 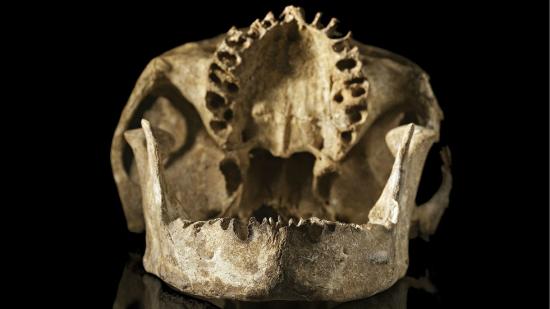 Strauss and colleagues investigated 26 human burials. They were surprised by the diversity and complexity of the remains in a region of South America where hunter-gatherer communities were assumed to be extremely simple and homogeneous.

"The burials included bones with cutting and chopping marks, exposure to fire, a head buried with amputated hands and skulls in which all teeth were intentionally removed," Strauss told Discovery News.

"In one case a skull cap was used as funerary receptacle. The mutilated and burnt bones of the same individual were deposited inside," Strauss added.

The researchers also noted that some chopped and defleshed bones show gnaw marks and signs of burning soft tissues, pointing to some form of ritual cannibalism.

Analysis of the remains showed that the practice of mutilation, followed by the secondary burial of the remains according to strict rules, was a central element in the treatment of the dead.

Then, between 8,200 and 8,600 years ago, another change occurred. Pits were filled with bones of a single individual without signs of body manipulation.

"This finding testifies that a great cultural diversity was already present in South America already 10,000 years ago," Strauss said.