The local government court ruins at Laogulou in Chongqing’s Yuzhong district are located at East Jiefang Road, wanglongmen street, in the Ba County Yamen subdistrict, at the foot of Jinbi Mountain. The ruins sit on a mesa along the left bank of the Yangtze River, oriented facing the river with the mountain behind them, in line with traditional local government court building regulations but also with distinct Bayu regional characteristics.

Chongqing Academy of Cultural Heritage has completed three stages of excavation on the site: 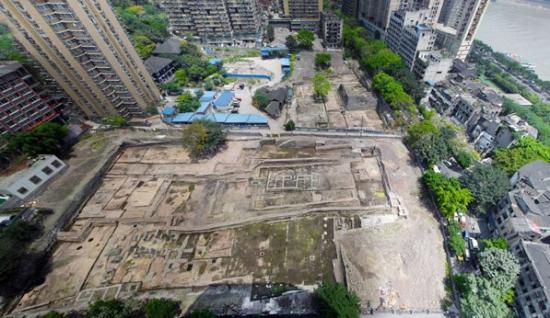 The local government court ruins sit on a gentle slope that runs from the north (high) to the south (low), and the site includes cultural accumulations from the four most recent periods of Chinese civilization: the Song, Yuan, Ming, and Qing dynasties. A total of 261 remains have been discovered and cleaned to-date, including more than 9,000 pieces (sets) of well-preserved ceramic, coins, eaves tiles, stone missiles, crucibles and lacquerware items; tens of thousands of individual objects altogether.

There are 58 historical remains from the Song and Yuan dynasties. Among the most important discoveries here is a rammed earth high platform with paved bricks on the surface located in the southern part of Zone I. An excavated section measuring 24.3 meters (north-south) by 24.7 meters (east-west) contained a stone foundation and revetment (wall used to support an embankment), approximately 10 meters high. The interior of the construction was rammed with layers yellow-gray sandy soil mixing with small pebbles, surrounded by revetment wall in the base of stone foundation. The revetment wall used black bricks set in alternate crossing style—a masonry method where two types of bricks are set in an interlocking, alternating pattern—to protect the sloping wall body which shrinks layer by layer from the bottom to the top and the slope is approximately 79 degrees. Inscriptions that read “淳祐乙巳 (chunyou yisi) eastern kiln brick,” “淳祐乙巳 (chunyou yisi) western kiln brick,” etc. were discovered imprinted on the bricks of the wall. Chunyou yisi refers to a cyclical calendar date in the era of Lizong’s reign in the southern Song Dynasty, 1241–1252. Large, structured stone drainage facilities have been discovered on the north and east side of the ruin F1.

Two large, 凸-shaped building foundations from the same period were discovered in the western part of ruin F1. Amongst ruin F54 was relatively well-preserved and three stone steps were discovered outside a south gate, along with signs of a secondary reconstruction. A significant discovery in the northern part of Zone II was the foundations (F72) of multiple courtyard-style buildings, which have a complete layout and structures. The wooden structures had well-preserved mortise and tenon joints, a slot-and-tab style architectural joint. In ruin F82, western part of Zone II, is a large, patterned structure with a stone foundation that also uses mortise and tenon joints; in front of the structure’s door were a set of stairs and flagstone road. Based on the analysis of a public drainage facility, we know F82 and F83 form a large complex of buildings.

Ruin F83 in zone II and ruin F14 in zone I which appear to have deliberately planned layouts with identical structures and seem to echo each other in the east and in the distant west, ruins F82, F55, and F36 in the middle section which assume a stepping-stone-shaped distribution for the high northern terrain and low southern terrain, and ruins F54 and F80 in the southern part jointly constitute a Song Dynasty local government court structure. Foundations of a “high-platform” of ruin F1 suggest the building might have been a drum tower or watchtower.

There are 100 historical remains from the Ming Dynasty. Included among these were traces of many house foundations, ditches, roads, and so forth, closely linked to each other to form a larger building complex in Zone II. The above-mentioned building complex measures 115.6 meters (north-south) by 54.1 meters (east-west), covering an area of 6,200 square meters with 14 individual ruins. It is enclosed by two large stone walls (Q3 and Q5) running north-south through the excavated region, forming a large courtyard within the complex. The courtyard is oriented facing the river in the south, with the mountain behind it. The area is clear cut and laid out according to a pattern with a distinct north-south axis. Based on the combination of the layout of the excavated structures along with these particular historical remains, it is possible to infer that the courtyard served as the nucleus for a Chongqing government court during the Ming Dynasty.

Moreover, structure Q12 in Zone I and structures Q3 and Q5 in Zone II appear to be similar, with identical orientations. Combined with ruins F25 and F47 in northeastern Zone II in the immediate vicinity of the aforementioned building complex, it is clear that a Ming Dynasty government court should include at least two sets north-south oriented, east-west standing multiple courtyard groups. Analysis of the excavated area suggests that each group of courtyards has a secondary or auxiliary relationship to a functional area of the government court. 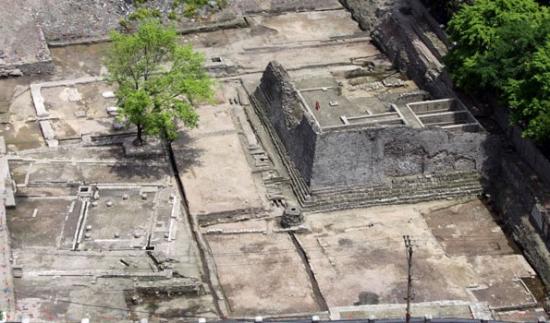 There are 101 historical remains from the Qing Dynasty. In addition to the building complex in Zone II (F19-F21), building ruins closely related to a Qing Dynasty government court were discovered in Zone I (F7). The ruins were rectangular in plane, south-facing, 23 meters wide and 17.75 meters deep. They include 9 pillar-bases in the middle, arranged in good order. The existing drum-shaped pillar-bases have carved pushouxianhuan (beast head with a ring in the mouth) design. There is a sophisticated drainage system, featuring a hidden subterranean drain, inside the foundation of the walls. The central section inside the building had a submerged well, connected to the outside via a hidden subterranean drain. Based on historical Chongqing government maps, ruin F7 may be the same building with the existing structures e “Ba County government court ruin”, perhaps functioned as the shrine of the Yashen (court- god).

The Laogulou local government court ruins are on a grand scale and have a clear layout and well-defined calendar date. Abundant historical relics have survived at the site, and the stratigraphic relationships are clear, with structures from the Song, Yuan, Ming, and Qing dynasties distributed in stratigraphic layers. As the greatest Chongqing historical accomplishment discovered to-date, the ruins are a highly valued historical site. These ruins have witnessed nearly a millennium of changes over the course of Chongqing’s development, and their discovery fills a gap of significant blank space in Chongqing archaeology, and is significant for the Song and Yuan archaeology outside the capital cities.    (Translator: Grace Warren)