Language and Toolmaking evolved together 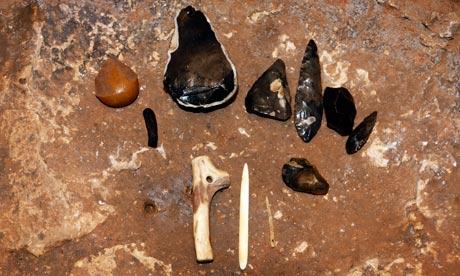 Stone-age humans mastered the art of elegant hand-toolmaking in an evolutionary advance that boosted their brain power and potentially paved the way for language, researchers say.

The design of stone tools changed dramatically in human pre-history, beginning more than two million years ago with sharp but primitive stone flakes, and culminating in exquisite, finely honed hand axes 500,000 years ago.

The development of sophisticated stone tools, including sturdy cutting and sawing edges, is considered a key moment in human evolution, as it set the stage for better nutrition and advanced social behaviours, such as the division of labour and group hunting.

"There has been a long discussion in the archaeology community about why it took so long to make more complex stone tools. Did we simply lack the manual dexterity, or were we just not smart enough to think about better techniques?" said Aldo Faisal, a neuroscientist at Imperial College London.

Faisal's team investigated the complexity of hand movements used by an experienced craftsman while he made replicas of simple and then more complex stone tools. Bruce Bradley, an archaeologist at Exeter University, wore a glove fitted with electronic sensors while he chipped away at stones to make a razor-sharp flake and then a more sophisticated hand axe.

The results showed that the movements needed to make a hand axe were no more difficult than those used to make a primitive stone flake, suggesting early humans were limited by brain power rather than manual dexterity.

Early humans were adept at making stone flakes, but these were so thin they were liable to break while being used. The movements needed to make advanced tools were no more difficult, but they had to be executed more intelligently, to produce a tool that had a fat, sturdy body with a sharp cutting edge.

The oldest and simplest stone tools, known as Oldowan flakes, were uncovered alongside the fossilised remains of Homo habilis, a forerunner of modern humans, in the Olduvai Gorge in Tanzania. Stone hand axes have been uncovered next to bones of Homo erectus, the ancient human species that led the migration out of Africa. Hand axes are usually worked symmetrically on both sides into a teardrop shape.

Brain scans of modern stone-tool makers show that key areas in the brain's right hemisphere become more active when they switch from making stone flakes to more advanced tools. Intriguingly, some of these brain regions are involved in language processing.

"The advance from crude stone tools to elegant handheld axes was a massive technological leap for our early human ancestors. Handheld axes were a more useful tool for defence, hunting and routine work," said Faisal, whose study appears in the journal PLoS ONE. "Our study reinforces the idea that toolmaking and language evolved together as both required more complex thought, making the end of the lower paleolithic a pivotal time in our history. After this period, early humans left Africa and began to colonise other parts of the world."