Lajia (Cine): DNA Reveals That It Was Not The Mother Protecting This Child In The 'Asian Pompeii' 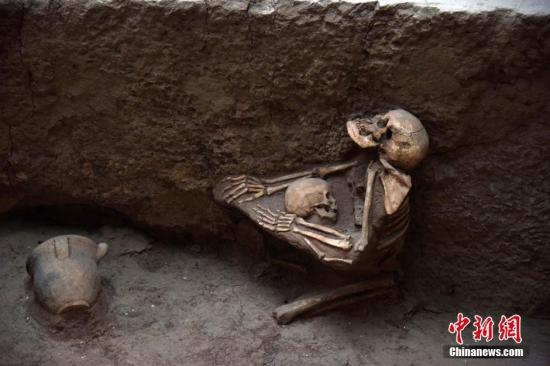 Adult female and child skeletons presumably from house F3 at the Lajia site in China. (Photo/CNS)

Images of skeletons from the Lajia site in the Qinghai province of China are captivating.  Painstaking excavation and pedestaling of the bones reveals adults and children in a 4,000-year-old embrace.  But while these images have gotten media attention today, the archaeological site has been excavated since 1999 by archaeologists primarily from the Institute of Archaeology at the Chinese Academy of Social Sciences and the Qinghai Provincial Institute of Antiquity and Archaeology.

The site of Lajia is associated with the Qijia culture, dating to the late Neolithic to early Bronze Age, and is located in the Guanting Basin of the upper Yellow River.  This site has produced everything from cave-dwelling type houses to pottery kilns to the remains ofpreserved millet noodles. The spectacular preservation appears to be the result of a catastrophic event: somewhere around 1900 BC, an earthquake shook the area and caused mudslides.  Writing in a 2013 article in The Holocene, Chun Chang Huang and colleagues explained that “the enormous mudflows suddenly buried and destroyed the dwellings and killed the women and children at their homes.”  But these mudflows, even though triggered by an earthquake, were “created partly by the early settlers themselves” through “soil erosion, mass wasting and accumulation of debris on the hillsides, intensified largely by human disturbance of the landscape by bush clearance from 6000-3950 years before present.”

Of course, my interest was piqued by the image of the skeletons of an adult and a child found embracing, particularly because the caption referred to a mother and son (as DNA is the only way to tell the sex of young children).  The main publication of the skeletons (in English, that is), is a 2007 article in the American Journal of Physical Anthropology by Shi-Zhu Gao and colleagues at Jilin University in China that deals with DNA analysis of the 16 skeletons from two houses inundated by the mudslides.

Gao and colleagues were interested in knowing if the 16 individuals were related and looked at mitochondrial DNA, which is passed down through the maternal line. “Twelve [DNA] sequences from individuals found in one house were assigned to only five haplotypes,” they write, “consistent with a possible close kinship.” The two skeletons — an adult woman in her mid-30s and a 3- to 4-year-old child — whose image has riveted the media today are assumed to be mother and child, but many media outlets are speaking of “mother and son.”  The only way to tell the sex of a subadult is through DNA analysis, but the 2007 publication has no information on sex of the child.

Even more interesting, though, were the DNA results of these two individuals.  Gao and colleagues write that, “the two mtDNA sequences from the individuals of F3 (one of the houses) differ from each other at five nucleotide positions. Although these two subjects may be genetically linked by a mother/son (or daughter) relationship, this result unambiguously excludes kinship through the maternal lineage.”  Further, they explain that these people “ did not share the same maternal line (mother-child pair) and their mtDNA haplotypes were different from the individuals in F4 (the other house). A patrilineal relationship remains a possibility since their skeletal remains were found close together.”

There was one group that did represent a mother-child pair according to the DNA analysis: a late 20s female and a 1- to 2-year-old child from house F4.  I don’t think this is the pairing illustrated in the circulating image above for two reasons: the child skull in that photo is more consistent with a 3- to 4-year-old, and based on the diagram in the 2007 article and the image below, the photos show two different adult-child pairs. I couldn’t find a clear image that represents the actual mother-child pair, although the photo above shows most of the groups from house F4.  According to my cross-referencing of the 2007 article with these images, the mother-child pair is represented by the skeletons at the very bottom. 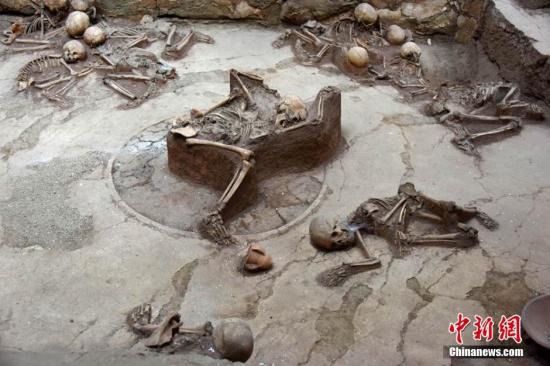 Skeletons from house F4 at Lajia, China. The skeletons that showed a mother-child relationship through DNA are the ones on the bottom of the image. (Photo/CNS)

Regardless of which dyad is depicted, what was the relationship between the adult woman and the 3- or 4-year-old child in house F3?  Was she perhaps an aunt or an unrelated caregiver?  Perhaps they were members of the same extended family?  The 2007 DNA results seem to directly contradict the easy explanation of mother protecting her child.  But that is, I think, what makes both the archaeological and the DNA results even more exciting.  What was the structure of the family like at Lajia?  And what does the protective stance of a woman over a child not her own mean for our understanding of Bronze Age China?

The photos from the “Pompeii of the East” are certainly breathtaking, but the story behind them is even more complicated and intriguing.