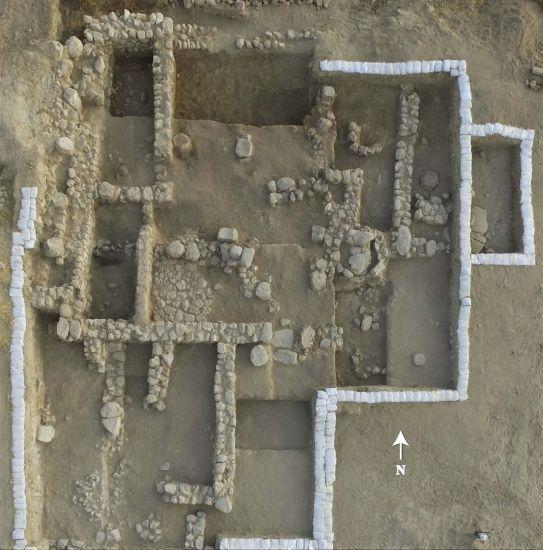 A Canaanite temple about 3,200 years old has been found at the site of the biblical city of Lachish, dating to the city’s turbulent last days under Egyptian rule. The rare discovery was made recently by a team of archaeologists led by Prof. Yosef Garfinkel of the Hebrew University of Jerusalem and Prof. Michael Hasel at Southern Adventist University in Tennessee.

The structure of the Canaanite temple is unusual for its time: the Late Bronze Age. Its entrance was marked by two pillars and two towers, which led to a large rectangular hall. Such construction was typical of even earlier temples in Syria, Garfinkel tells Haaretz. But unusually for that period in the Bronze Age, the newly discovered structure also had small rooms along the sides.

“They were for storage,” the archaeologist explains. “We found wooden boxes that had been burned, but still had a lot of wheat inside.” The temple priests probably also stored other things there, such as clothing, Garfinkel adds.

Biblical descriptions of the First Temple in Jerusalem, ostensibly built by King Solomon, have that same basic Canaanite structure of pillars and towers leading to a central hall, the professor notes.

Representatives of the god

The inner sanctum within the temple featured supporting columns – and three-meter-high “standing stones” inside a circle of smaller stones.

These standing stones are interpreted as being representations of gods – as described in the Bible itself, in the story of Jacob and his dream of angels going up and down a ladder between heaven and Earth, with the deity at the top, Garfinkel explains, noting the biblical passage:

Jacob awoke from his sleep and said, Surely the Lord is present in this place, and I did not know it! ... Early in the morning, Jacob took the stone that he had put under his head and set it up as a pillar and poured oil on the top of it” (Genesis 28:16-18).

In addition to the ruins, the team discovered bronze cauldrons, daggers and axe heads adorned with bird images, scarabs and a gold-plated bottle inscribed with the name Ramses II, one of Egypt’s most powerful pharaohs. Near the temple’s altar, the team found two bronze figurines – apparently armed “smiting gods.”

They also unearthed an amulet apparently inspired by Hathor, an ancient Egyptian member of the pantheon – but a goddess of mysterious provenance.

Some question whether the mythological figure of Hathor arose in Canaan and only reached Egypt at a later stage. Often depicted as a cow, Hathor personified female aspects of love, music, fertility and more; she was the deity supposedly responsible for welcoming the deceased to the afterlife. She was also an object of worship specifically among miners, according to archaeologist Elizabeth Sloane.

Indeed, the Canaanites and ancient Egyptians exerted a mutual influence on each other, Garfinkel says. In fact, at some point the Canaanites ruled Egypt. It was only with the 18th Dynasty (about 1549 to 1292 B.C.E) which featured luminaries such as the super-famous King Tutankhamun and Nefertiti – that the ancient Nile kingdom rose to the height of its power and violently swept over what is today Israel.

Lachish had an intensely bloody history, as do so many towns in this region. Located in central Israel, not far from the present-day city of Kiryat Gat, Lachish may go back to time immemorial, but the powerful city of the Canaanites actually arose around 1800 B.C.E.

It survived for around 400 years, only to be destroyed in 1550 B.C.E. by the Egyptians under Pharaoh Thutmose III, as they rolled over the region in the 18th Dynasty’s massive expansion. The places where ancient Egyptian and Canaanite forces clashed include Megiddo, which was reportedly the first – and Lachish. 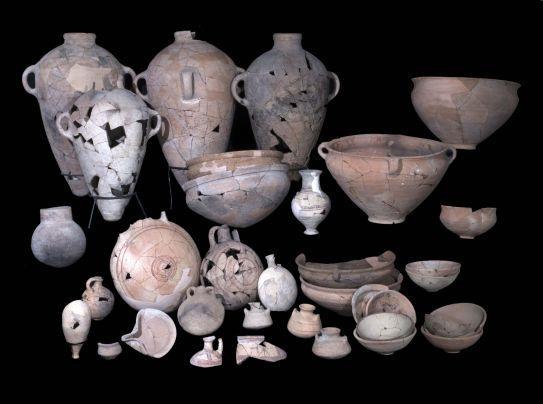 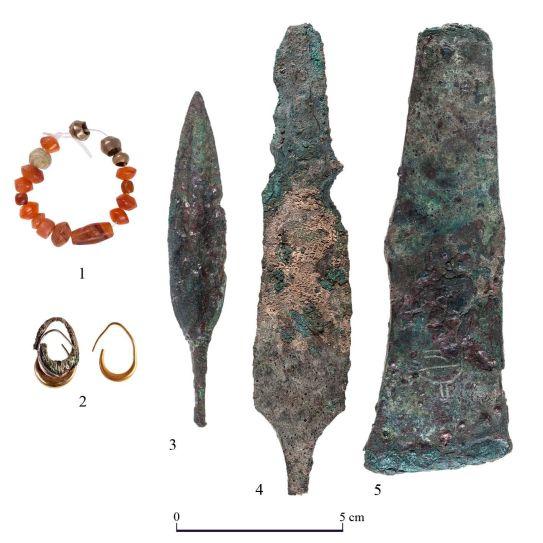 Weapons and jewelry found near the temple inner sanctum: beads, earrings, an arrowhead, a dagger and an axe head Tal Rogovski

Indeed, the earliest-known written mention of Lachish is in the Amarna letters: These include no less than 350 exchanges on clay tablets between the overlords in Egypt and their representatives in Canaan – the kings of the cities: Lachish, Gezer, Jerusalem, Megiddo and more.

The letters were matter-of-fact: seeking favors, discussing political matters and so on, Garfinkel says. They indicate that, at the time, Lachish was a powerful city in the Shfela – the Judean foothills and plain. Anyway, the irrepressible Canaanites rebuilt their city, only to see it destroyed again in 1300 B.C.E. And then they rebuilt it again.

“This time the city existed for about 60 years,” Garfinkel observes, from roughly 1200 to 1150 B.C.E. And it was in that incarnation of the city that the temple recently discovered was erected.

“The temple belonged to the last Canaanite city,” the archaeologist confirms. The architecture is consistent with Canaanite construction and there are the two statuettes of Baal, a god that was not worshipped in Egypt.

But the artifacts show how deep the Egyptian influence had run: They also found scarabs, and there was that amulet with Hathor, holding her hallmark lotus flowers, or possibly a papyrus, in hand. 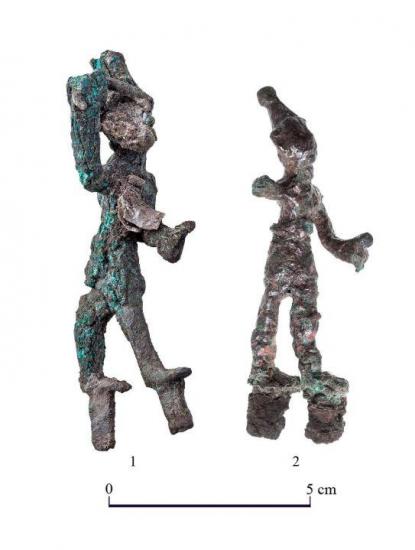 Yet that city too would be leveled, and that spelled the end of the Canaanite rule in Lachish.

The land would remain uninhabited for about 200 years, and then, in about 920 B.C.E., Rehoboam, son of Solomon, rebuilt it yet again.

But his city had no more luck than the Canaanite efforts: It was destroyed by the Assyrian juggernaut, commanded by Sennacherib.

And then it would be rebuilt again, only to be destroyed by Nebuchadnezzar in the 6th century B.C.E. If it is any comfort to the descendants of the Canaanites, they also had influence over Egypt: Gods of clear Canaanite origin, such as Anat, are depicted on stelae there.

Brought to you by the letter ‘samekh’ 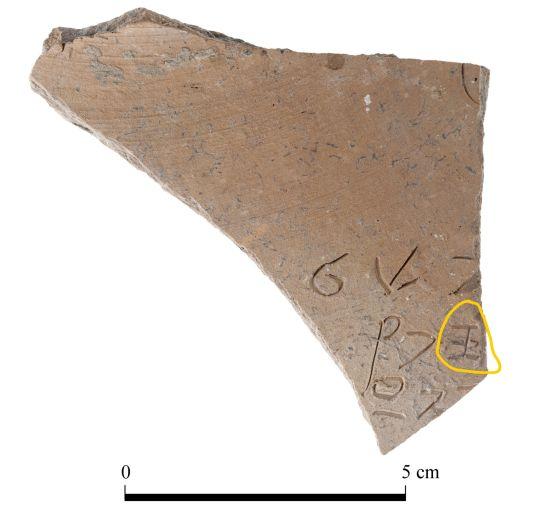 The earliest-found version of the letter samekh is in the yellow circle, bottom right Tal Rogovski

And there was one almost-miracle in this newly found temple. The archaeologists discovered an incredibly rare inscription on a pottery shard with early Canaanite writing – including the first-ever found representation of the proto-Canaanite letter samekh (which would be, much later, adopted in Hebrew).

Though opinions about proto-writing differ, it is largely accepted that the Sumerians in Mesopotamia were the first to invent writing, in about 3500 B.C.E. Their writing took the form of cuneiform: wedge-shaped marks made on clay tablets. Hieroglyphics would subsequently appear in ancient Egypt, by about 3100 B.C.E. “But that was a very complicated form of writing. Only experienced scribes could do it,” Garfinkel observes.

It would take another 1,000 years for the aleph-bet writing system to arise, in about 1800 B.C.E. That early alphabet had 32 symbols. Examples of it have been found in Egypt and the Sinai, the archaeologist adds.

The writing in the Lachish temple is later, from about 1200 B.C.E. – and there for the first time, we see how the proto-Canaanites wrote the letter samekh. “They had the other letters, het and resh and shin and so on, but not samekh,” Garfinkel says

So how do we know that’s what we see in this shard? Because, he explains, in about 1000 or 950 B.C.E. (let’s not be petty about the dating), the Phoenicians adopted and refined alphabetic writing, and formalized it.

The proto-Canaanite writing was haphazard and undisciplined – right to left, left to right, whatever. The Phoenicians de-schematized it. We know what their samekh looked like, and this is it.