Following the spectacular discoveries made at Khirbet Qeiyafa, the archaeological team turns its sights on the 10th - 9th century BC layers of a famous ancient Judahite stronghold.

According to the Biblical account, the ancient fortified city of Lachish was for a time considered, after Jerusalem, the second-most important city in the Kingdom of Judah. Today, its ruins can be seen atop a prominent "tel" or mound located in the Shephelah lowland of Israel between Mount Hebron and the maritime Mediterranean coast. The remains are a visible reminder of a city that represented a strength and glory ravaged through the military designs of advancing Assyrian and Babylonian armies long before the ancient Romans ever set foot in this country. It is best known as the location of a great siege by Assyrian king Sennacherib in 701 B.C.E.

Today, this city may sit again in the cross-hairs of a different kind of battle -- one that revolves around the debate concerning the nature and historicity of the early Kingdom of Judah. Prof. Yosef Garfinkel, the Yigael Yadin Chair of archaeology at the Hebrew University of Jerusalem, stands at the center of the debate. His headline-making discoveries at the site of Khirbet Qeiyafa, which included, most notably, a massive monumental fortified casemate wall and two city gates, the famous inscribed ostracon that arguably represents the longest Proto-Canaanite text ever found, and the remains of a palatial structure and pillared store room, all suggested to date to the time of the Biblical King David and attributed to his kingdom, have drawn criticism from other scholars who contend that David and Solomon and the kingdom they ruled may not have been the larger-than-life entities that are depicted in the Biblical accounts. Now, in part to address some of the arguments, issues and interpretations swirling within this debate, Garfinkel and colleagues are heading a new team that will begin re-exploring and excavating Lachish in 2014. It is a site that has already been the subject of several historic excavation expeditions but, as is common with many archaeolgical sites, remains unfinished business. And within the context of acquiring a better understanding of the early Judahite State, they are drawing a research connection between their completed excavations at Khirbet Qeiyafa and re-newed excavations at Lachish.

"The results from Khirbet Qeiyafa, together with the results from Lachish," write Garfinkel and colleagues in a recent article published in Biblical Archaeology Review, "will enable us to obtain a clearer and more complete picture of the early history of the kingdom of Judah in the tenth and ninth centuries B.C.E. We view these two excavations as one regional Project."* 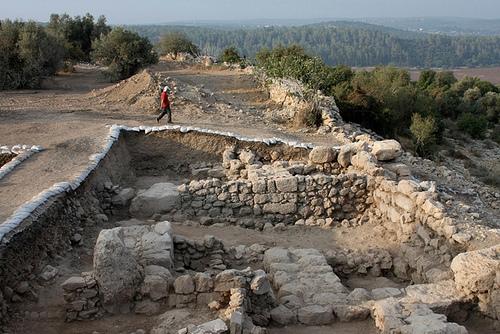 View of the western gate at Khirbet Qeiyafa, excavated under the direction of Yosef Garfinkel. Yaels, Wikimedia Commons 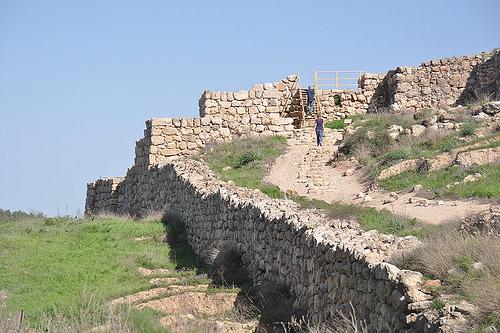 View of some of the ancient excavated remains of Lachish as they appear today. Pikiwiki Israel 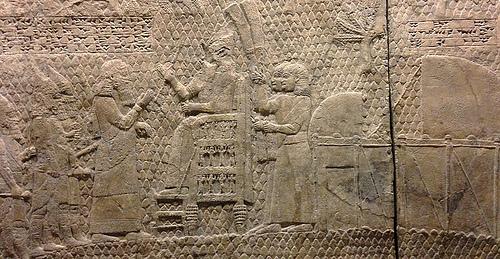 Inscription on the Assyrian Lachish Reliefs. Left hand side states: ""Sennacherib, the mighty king, king of the country of Assyria, sitting on the throne of judgment, before (or at the entrance of) the city of Lachish (Lakhisha). I give permission for its slaughter," per "Discoveries Among the Ruins of Nineveh and Babylon", p 128. Oncenawhile, Wikimedia Commons

Past excavations at Lachish have revealed a city that was occupied from the Pottery Neolithic (5500–4500 B.C.E.) period to the 2nd century B.C.E.  Key finds have included abundant evidence of the Assyrian siege, a number of ostraca inscribed in classical Hebrew, and the largest collection of LMLK seals, seal stamps on jar handles attributed to the reign of Hezekiah, King of Judah in the 8th - 7th century B.C.E.

"The current expedition will concentrate on the 10th–9th centuries B.C.E. and we'll try to answer questions like: When was Lachish inhabited for the first time in the Iron Age [1200 - 500 B.C.E.]? When was Lachish first fortified in the Iron Age? How did the economy, administration, international connections, writing, cult and art develop in the first 200 years of the Kingdom of Judah? We will also examine the connection between archaeology and the Biblical narrative of the tenth century B.C.E."**

Garfinkel, along with co-directors Michael G. Hasel and Martin G. Klingbeil of Southern Adventist University, hope to begin excavations with a team of other specialists, students and volunteers in June of 2014. More information about the expedition and how one can participate can be obtained at this website.