On a computer, Bob Reynolds watches caribou run across a wilderness of spruce and lagoons on the edge of Lake Huron. A few of the creatures pause to graze, while the rest move slowly across the tundra

What's unusual is that the caribou herd is simulated. They are moving at their own whim across a virtual world that mimics an ancient land bridge that existed 10,000 years ago, but now is submerged beneath the waters of Lake Huron. 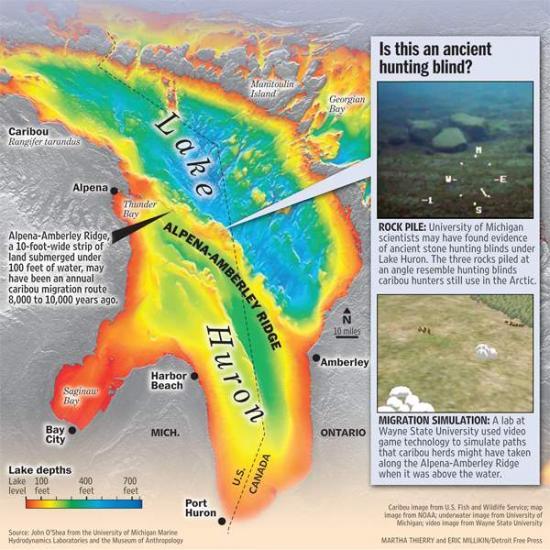 Reynolds, a professor at Wayne State University, and other scientists are using modern methods, including artificial computer intelligence and roving underwater robots with video cameras, to look for evidence of ancient caribou hunters. 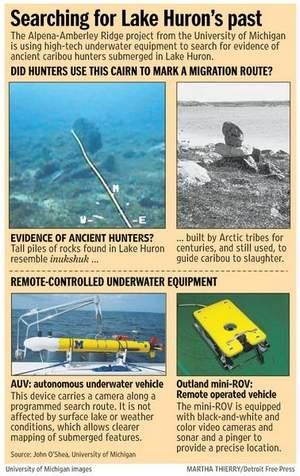 So far, they've found tantalizing signs: what look like stone hunting blinds, drive lanes to steer the animals and the remains of human-built rock statues that gently guided the caribou to ambush sites.

This spring, divers will return to the submerged land bridge with sharper information, drawn from Reynolds' virtual reality caribou runs, about how the animals would have behaved and where hunters might have camped to harvest them. The divers will be looking for artifacts such as spears, antler  bones, caves and cracked rocks used in fires. 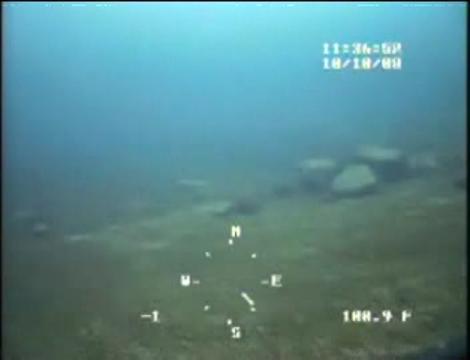 Fifty miles out from Harrisville, about 100 feet below the surface of Lake Huron near the Canadian border, robots with cameras and underwater vehicles have been roaming as part of an unusual underwater archaeological dig. They are scouring the landscape for evidence of ancient hunters.

Except for zebra mussels everywhere, the underwater scene is preserved as it might have looked 8,000 to 10,000 years ago, before glaciers melted and covered the land with water.

"What we see is what was there," said John O'Shea, a professor of archaeology at the University of Michigan, one of the researchers. "It's pristine."

He compared it with Pompeii, the ancient town in Italy preserved by volcanic ash.

There are few places like it anywhere underwater; usually, sediment slowly buries the remains, but not here, he said. The water seems to have preserved the hunters' rock formations.

Knowing where to look

Thousands of years ago, a narrow strip of land poking up diagonally near its middle split Lake Huron in two. One end was near Alpena, the other near Amberley in southwest Ontario. Scientists say the Alpena-Amberley Ridge was only about 10 miles wide. No one knew it was a single, continuous underwater mountain ridge until 2006, when new underwater data came out.

O'Shea and other scientists are excited about what they've found there so far. Along the ridge, they discovered rocks piled at an angle that look like hunting blinds caribou hunters still use in the Arctic. Tall piles of rocks look like human-built statues, called inukshuk, that native Arctic tribes have made for centuries, often used to guide caribou to slaughter.

Combining that real evidence with the movements of artificially intelligent, computer-created caribou herds is being done at Wayne State University's artificial intelligence lab. Scientists say they hope to find spots along the ridge to target this spring to look for further evidence that humans hunted there.

"We don't want to waste time looking everywhere," said O'Shea. "We need to know where we should look."

The computerized caribou, which O'Shea describes as groundbreaking and one of the most exciting parts of the research are helping.

Just last week, the Wayne State computer lab put the blinds and rock piles into their 3D virtual world and let herds of caribou run, to see where they would go.

"I almost fell out of my chair," said Bob Reynolds, a Wayne State professor leading the artificial intelligence efforts. The tracks of several of the caribou herds led straight past the rock structures, just as O'Shea theorized they would.

Modern caribou hunters in the Arctic in Canada have described some of their methods, including guiding the animals into drive lanes. Caribou are biologically programmed to follow lines and each other's footprints. The modern hunters can direct caribou by removing shrubs or trees, or by building inukshuks to guide them into strategic spots

O'Shea said scientists using underwater vehicles with sonar and robots with video cameras have found such drive lanes, nicknaming one Dragon Drive Lane because it is lined with groups of rocks. There also is a ring of stones with a large boulder in the center that is so far a mystery.

For those who might wonder if the scientists are imagining things, O'Shea notes that these rock formations are the only rocks around. "There are no others but these," he said. "It's not like we're picking these rocks out of random ones." That makes the evidence especially compelling, he said.

Such structures have not been found before in the Great Lakes, he said.

Reynolds' lab created the caribou simulations by inputting the animals' behaviors and characteristics into a computer program made to create video games. In the games, a character's movements are based on stored patterns. The lab gave the caribou starting and ending points, but left it to the creatures to learn, over hundreds of simulated runs, how to get from start to finish most efficiently. The creatures leave tracks so researchers can see their paths.

Reynolds and students also plugged in information from scientific research on the land bridge, including the terrain. The virtual landscape has spruce trees and small ponds, as well as the same steep cliff the real Alpena-Amberley Ridge has.

Then, they let the caribou run, over and over, to see how the animals would move across the land and what migration patterns would be. The caribou do their own thing. "I'm not controlling them," Reynolds said.

If they disappear into the forest, he can train a camera on them and follow. Some members of the herd may veer off to nibble, while others keep going.

After hundreds of simulated caribou runs, their paths converge, and that's where the scientists theorize the hunters would have been waiting for the animals. They can tell even that the blinds were most likely used during fall migration, O'Shea said.

When the water is warmer, around the end of May, divers will drop down to the ridge to search for more direct evidence of the hunters. They'll be looking for caves, antler or bone caches, rocks cracked by use in human fires, spears, residue from sharpening spearheads and spear tips. The caves even might have preserved wall paintings

The first findings, including the drive lanes and hunting blinds, have been peer-reviewed and published. Still, there are doubters. At a talk earlier this month on the caribou research, a scientist said she has yet to be convinced that what has been found so far is proof of human activity.

"What we need we may never find," said Guy Meadows, a professor of atmospheric, ocean and space science at U-M and one of the project researchers. "That would be a spear sticking out of a caribou skull."

On O'Shea's desk is a bottle of single malt Scotch from an archaeologist investigating sites in Saginaw Bay. It's a prize for whomever is first to bring irrefutable evidence of human activity from Lake Huron's mysterious depths.