Several submerged sections of a tomb built for the ancestors of Ming Dynasty (1368-1644) founder Zhu Yuanzhang recently resurfaced in east China's Jiangsu Province as the result of a severe drought that is still affecting the region.

Located on the west bank of Jiangsu's Hongze Lake, the tomb was built by Ming Dynasty emperor Zhu Yuanzhang in AD 1386 to honor his ancestors. 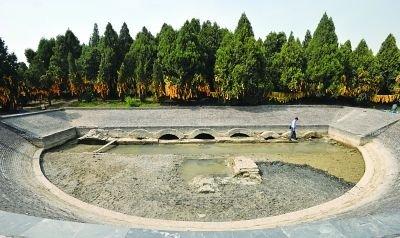 Several submerged sections of a tomb built for the ancestors of Ming Dynasty founder Zhu Yuanzhang recently resurfaced in east China's Jiangsu Province as the result of a severe drought. [Gao Linsheng]

The mausoleum was flooded in 1680, when the Yellow River broke its banks, changed course and converged with the nearby Huai River.

A drought in the 1960s caused Hongze Lake's water level to drop, revealing external portions of the tomb as well as several stone statues. However, the tomb itself remained underwater.

Tales of a royal tomb buried under the lake traveled quickly among the lake's residents. The government considered sending archaeologists to investigate the lake, but the lake's residents voiced their opinion that it was better not to disturb the royal burial site. The tomb remained untouched.

The issue of preserving the tomb after uncovering it was another problem for the local government at that time, according to Hu Rensheng, head of a management committee for the newly-discovered tomb.

It was not until recently that local residents got to take their first look at the tomb, which hadn't seen the light of day in more than 300 years.

Stone arches and other parts of the tomb emerged on Thursday as the lake's water level continued to recede because of the recent drought. Local residents also got a look at a paved path leading to the tomb.

Although the majority of the tomb is still buried under the lake's muddy floor, the mere sight of the tomb's outer structure was enough to thrill local residents.

Several of the bricks used to build the tomb still retained their red color, even after centuries of being submerged in the lake.

"It (the color) is cinnabar from the Ming Dynasty. It is a miracle that the color stayed unchanged for such a long time," Hu said.

He said the sudden decrease in the lake's water level was probably caused by the drought, but he said it was also possible that a sinkhole might've opened up in the lake and drained some of the water, as droughts in previous years have never caused the lake's level to drop so dramatically.

To avoid any possible damage resulting from the tomb being exposed to air, the local government immediately pumped water into the lake, causing the tomb to become submerged once again. However, the lake's water level decreased significantly on Friday, which indicates that a sinkhole might be the cause of the drainage, according to Hu.

Hu said his management committee will talk to archaeological experts in order to figure out the best way to preserve the tomb if the lake's water level continues to plummet.