A galaxy of colourful animal and human sketches adorn the caves in the rocky hills of this arid wilderness in northern Somalia, home to Africa's earliest known and most pristine rock art.

But in a region ravaged by two decades of relentless civil unrest and lawlessness, the archeological site is at risk of destruction, looting and clandestine excavation.

The 10 caves in Laas Geel, Somali for "camel watering hole", outside Hargeisa, the capital of Somalia's self-declared Somaliland state, show vivid depictions of a pastoralist history dating back some 5,000 years or more. 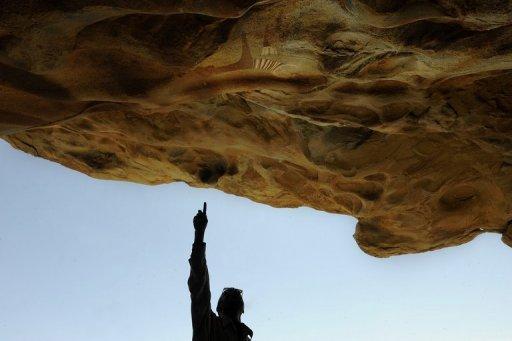 The paintings were discovered in 2002 by a French archaeology team and have since been protected to bar looters after their value became apparent to locals who previously feared they were the work of evil spirits.

"The people around here thought the caves had evil spirits and never used to come near. They offered sacrifices not to be harmed," recounted Ali Said, an assistant archaeologist with the Somaliland government.

The cave galleries provide a peek into the little known history of this part of the world, which in recent times has mostly been famous for bloody conflicts and instability.

Paintings of decorated cows -- some with radiant neck stripes -- herders and wild animals point to the interglacial period when the now arid Horn of Africa region was lush and had plenty of wild animals, explained Sada Mire, a Somali-born British archaeologist working to preserve the rare heritage. 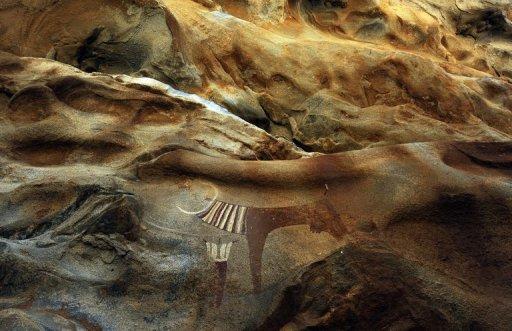 Much of Somalia is now a vast badland and the parched Laas Geel region no longer draws heards of cattle coming to graze and water, while human settlement is sparse.

"We know that the painters were pastoralists who lived in a much better climate than the present," Mire said.

"It is quite an important discovery as little is known about the history of this region and lots of archaeological heritage is being lost to destruction, looting and neglect," she added.

The Laas Geel rock caves are located near a confluence of two now dry rivers, which lend credence to its name and the practice of herders taking to etching cave walls with animal and other depictions.

While some of the Laas Geel cave paintings are stunningly vivid, others have faded off due to rock degradation and effects of weather. The caves house a constellation of brown, orange, white and red pre-historic sketches on the walls and ceiling.

"The paintings are vanishing if urgent conservation measures are not taken. At the moment we are protecting and recording them. Weathering as well as human threat in terms of unplanned development are immediate treats," Mire said.

Mire now works with the government of Somaliland to train locals to protect the artefacts as well as help authorities draft laws to preserve the region's historical sites.

A former British protectorate, Somaliland declared independence from the rest of Somalia when war erupted following the overthrow of president Mohamed Siad Barre in 1991, but it is not recognised by the international community.

The small region in northern Somalia also boasts other pre-historic sites, also with cave paintings and other early human life.

In the northern Dhambalin region, rock caves also host colourful paintings of cattle and wild animals as well as dogs and a man on a horseback, which Mire said in a recent article is one of the earliest known depictions of a mounted huntsman.

Somaliland has been spared much of the violence that has flayed the south and central Somalia regions and authorities are looking to capitalise on the relative stability and the recently discovered historical treasures to woo tourists.

"People now appreciate these (rock) paintings and they hope they will attract tourism which will benefit them," Said noted, pointing to a cluster small drawings of wild animals in one of the caves.

"The government is encouraging those who can to build hotels and resorts around here (Laas Geel) to host tourists," he added.