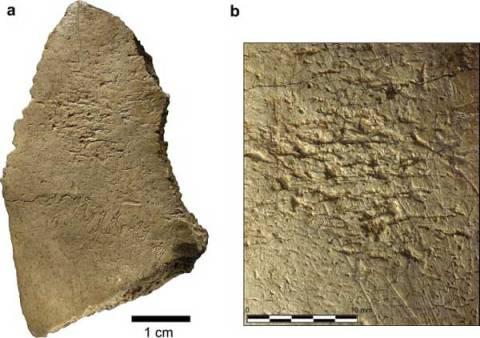 The skull fragment of human bone (a) with a close-up view (b) of the area used for retouching stone tools. Credit: F. d'Errico, C. Verna.

The earliest known tool made from human bone has been discovered — and it was apparently crafted by Neanderthals, scientists find.

The scientists note that as of yet, they have no way to prove or disprove whether the Neanderthals who made the tool did so intentionally — for instance, for rituals or after cannibalization.

Until now, the first evidence that human bones were used either symbolically or as tools were 30,000-to 34,000-year-old perforated human teeth found at excavations in southwest France. These were apparently used as ornaments.

Now scientists have identified a human skull fragment dating back at least 50,000 years that bears signs it was used as a sharpener. It was found in a Neanderthal deposit — the first time our relatives were discovered making tools from human bone. (Neanderthals are an extinct kind of human that were anatomically distinct from us modern humans.)

The bone was first unearthed in 1926 at the La Quina site, a former rock shelter at the foot of a limestone cliff flanking the left bank of the Voultron River in southwest France. It was discovered with artifacts from the Mousterian industry, a method of making flint tools linked with Neanderthals. These fragments did not yield much information about the anatomy of these individuals, so they were mostly ignored at the museum at Lyon, France, for years.

Then paleoanthropologist Christine Verna at the Max Planck Institute for Evolutionary Anthropology in Leipzig, Germany, reinvestigated all the human remains at La Quina. Using microscopic analysis of the bone fragment, she and her colleague Francesco d'Errico at the University of Bordeaux in France found evidence it was used to retouch stone tool edges. They also detected scraping marks on the fragment, possibly resulting from cleaning of the skull before it was broken into pieces. The bone likely came from a Neanderthal, as only they were found at Mousterian deposits at La Quina.

A number of animal bones on the site, including a reindeer jaw and a horse tooth, also showed evidence they were used as retouching tools. However, none of the other retouchers from this site or any other known Mousterian site was ever made from skull fragments, apparently making this new discovery unique and perhaps suggesting the human bone was intentionally chosen for use as a tool.

"It could reflect that a human bone was not seen as any different from an animal one — in other words, that this human body was treated exactly like the fauna, in which case they were not attributing any symbolic meaning to this death," "Or it could reflect a particular process in which using this human bone as a tool had a special meaning, even though we don't know which one."

"These results remind us how little we know about the relationship these Paleolithic societies had with death, and that probably a high diversity existed in terms of treatment of the dead," Verna said. "Regarding Neanderthals, the debate usually focuses on the hypotheses of cannibalism and burial. We know that some Neanderthals, in certain regions, at certain time periods, were burying their dead, but that certainly reflects only a small part of a broad range of behaviors. It is unlikely that all groups of Neanderthals everywhere in Eurasia and during all their evolutionary history were having the same mortuary practices, if any."

Future research should look carefully at old collections of Paleolithic human remains to look for possible traces of use, as well as ancient animal remains, to look for any human bones possibly hidden among retouchers, "with the hope of finding more examples like this one," Verna said. "If we find more, it will favor the scenario of a deliberate use by Neanderthals or other later humans of human bones as tools."

Verna and d'Errico detailed their findings online Dec. 4 in the Journal of Human Evolution.