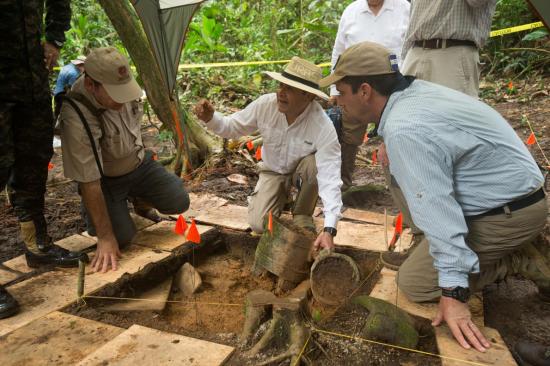 Honduran President President Juan Orlando Hernández, in white, confers with archeologist Chris Fisher, right, at the site of an ancient city in the Mosquitia region of Honduras. PHOTOGRAPH BY DAVE YODER, NATIONAL GEOGRAPHIC

Excavation of a “lost city” in eastern Honduras has begun with a flourish, with President Juan Orlando Hernández personally removing the first stone sculpture from the site Tuesday. The artifact is one of dozens from a cache found in February of last year among ruins of a Pre-Columbian city deep in the jungle of La Mosquitia. The artifacts were left untouched under military protection at the undisclosed location. Now, a joint Honduran-American archaeological team has returned to the site to excavate the artifacts and further explore the region.

The vessel personally removed yesterday by President Hernández is a spectacular vessel carved in basalt. The rim of the jar depicts two animal figures, one of which might possibly represent the head of a vulture, common to that area. The vessel is one of fifty-two stone sculptures, discovered on the February expedition, which had been deposited at the base of an earthen pyramid in the central part of the city about five to eight hundred years ago, and apparently left untouched ever since. Only the very tops of the sculptures could be seen protruding from the ground. 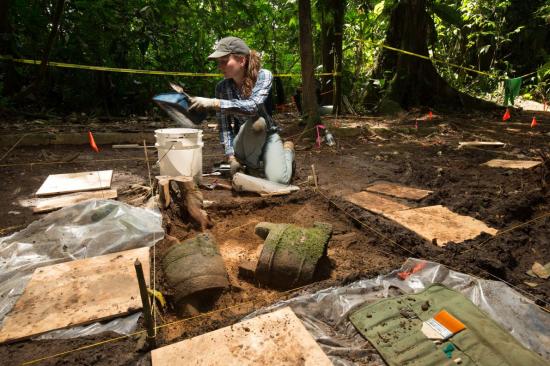 In just the first few days of excavation this month, the team, led by archaeologist Chris Fisher of Colorado State University in Fort Collins, has found a dozen more objects, bringing the total to sixty-four. The artifacts are mostly stone jars and “metates,” which are presumed to be thrones or seats of power. Many of the objects are elaborately decorated with animal heads and geometric patterns. One of the metates is incised with a series of designs that archaeologists say seem to resemble those found in a Maya “sky band,” an abstract depiction of the night sky. This could be a significant find, helping scientists to understand the connection between the largely unknown and unnamed culture of prehistoric Mosquitia and its powerful Maya neighbors to the west and north.

The excavation is being conducted under a grant from the National Geographic Society, and with the support of the Honduran government and the Honduran Institute for History and Anthropology (IHAH), and its director, Virgilio Paredes Trapero.

“We believe there could be many more artifacts,” said Fisher, “and maybe royal burials below.” In other parts of Central America, burials of high-status individuals, often with beautiful grave goods, have been found beneath metates.

President Hernández also removed from the ground a “were-jaguar” head, well known following media reports of the discovery of the cache last March. The sculpture is believed to depict a shaman in a transformed spiritual state, part animal and part human. The head, the only thing visible above the ground, turned out to be the front part of a metate, with two legs resembling a crouching animal, with a stubby tail. This artifact has given the valley a new name. Previously referred to by the mundane name of “T1,” short for Target One, it has now been formerly renamed the “Valley of the Jaguar.”

When the find of the stone cache was first announced by National Geographic last March, it drew criticism from some archaeologists, who argued that the discovery of the site had been exaggerated, given previous archaeological research in the region and alleged knowledge of the site by local indigenous people. According to a response from the expedition team, the sites identified by the 2012 lidar survey and confirmed by the expedition in February do not appear in any academic publications and have not been mentioned in project reports or other documents in the official IHAH archaeological archive. The specific area is a “pristine tropical wilderness” far from any settlements, roads, or other signs of human habitation.

In an exclusive interview with National Geographic at the site of the cache, President Hernández spoke Tuesday of his early memories hearing the legends of Ciudad Blanca—a mythical lost city in the Mosquitia jungle—and his excitement when, as President of the Honduran Congress in 2012, he heard the news that an aerial survey of Mosquitia using an imaging technique called lidar had turned up not one, but two, “lost cities.”

“This is an archaeological and historic event,” he said. “This culture is fascinating, but we’ve got a lot to learn, and it’s going to take some time.” He added, “We are happy to share this knowledge with the world.”

James Nealon, the American ambassador to Honduras, was also present yesterday at the site for the removal of the first artifact.  He felt it was a “great day for Honduras” and a wonderful example of Hondurans and Americans cooperating on a project of importance to both countries and the world.

The president and the two artifacts were flown by helicopter out of the jungle to the town of Catacamas, which lies on the southern edge of Mosquitia. At the small airport in Catacamas, where the Hondurans are building a laboratory and future museum to house and study artifacts from the ruins, the president unveiled the two objects before a crowd of 300 ministers, dignitaries, scientists, and the Honduran press. “For the first time,” Chris Fisher told the group, speaking of their excavations, “we are able to study this culture systematically.”

The second city discovered in the lidar survey—known simply at T3 or Target Three—is much larger than the Valley of the Jaguar, but has never been explored. On January 18, Chris Fisher and a National Geographic photographer plan to fly into the site on a Honduran military helicopter for a brief survey.