New investigations at an iconic cave site on the Channel Island of Jersey have led archaeologists to believe the Neanderthals have been widely under-estimated.

Neanderthals survived in Europe through a number of ice ages and died out only about 30,000 years ago.

The site at La Cotte de St Brelade reveals a near-continuous use of the cave site spanning over a quarter of a million years, suggesting a considerable success story in adapting to a changing climate and landscape, prior to the arrival of Homo sapiens.

The La Cotte ravine has revealed the most prolific collection of early Neanderthal technology in North West Europe, including over 250,000 stone tools. These include stones with sharpened edges that could be used to cut or chop, known as hand axes.

"Archaeologists have developed new ways of looking at stone tools since La Cotte de St Brelade was excavated in the 1970s," says Dr Beccy Scott from the British Museum and the Ancient Human Occupation of Britain project.

"We have been using these techniques to look at how Neanderthals were making and using the tools they left at La Cotte."

"The artefacts from the site don't just tell us about what people were doing at the site itself, but throughout the landscapes that are now underneath the channel," continues Dr Scott. 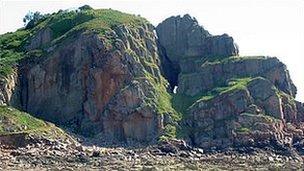 La Cotte is fundamental to our understanding of Neanderthal behavioural development

"Neanderthals were travelling to Jersey already equipped with good quality flint tools, then reworking them, very, very carefully so as not to waste anything. They were extremely good at recycling."

"The site is the most exceptional long-term record of Neanderthal behaviour in North West Europe," says Dr Matt Pope from the Institute of Archaeology at University College London.

Jersey at this time was linked to mainland Europe and La Cotte would have been a sheltered cave, allowing occupation.

Neanderthals abandoned the site during the coldest, glacial phases, when much of Britain was frozen.

Understanding how they reacted to the onset of these cold periods will allow archaeologists a greater insight into the limits of Neanderthal tolerances.

The site has been the focus of archaeological research for over 100 years and scientists believe more discoveries are yet to be made.

"We are also starting to look beyond the site and into the waters of the bay with the purpose of attempting to find new sites preserved on the sea bed," says Dr Martin Bates from the University of Wales, Trinity St Davids.

"We know from work around the Cotentin (peninsula in Normandy) that such sites exist and if we were lucky enough to find similar sites around Jersey, it would add significantly to our understanding of the Neanderthals and their landscape."