Researchers will be treading carefully, and watching closely, when they make seismic waves to investigate a little-known castle built in this ancient capital and then destroyed soon after by warlord Toyotomi Hideyoshi. 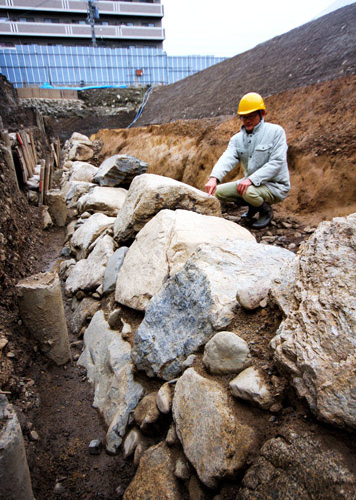 A 32-meter-long stone wall has been uncovered in one part of what was once Jurakudai castle. (Asahi Shimbun file photo)

Their main task is to identify where the moats of Jurakudai castle, built about four centuries ago, were located because this will help understand the outline of Kyoto’s original city planning.

“The prototype of the Kyoto townscape was created during Hideyoshi’s rule, and Jurakudai was at the center of the city,” said Takumi Furukawa, an archaeologist affiliated with the Kyoto prefectural government’s education department and a member of the research group. “The shape of the moats will serve as important information in learning about urban planning of that time.”

The problem is that the castle site is located in a heavily populated residential area--about 1 kilometer west of the Kyoto Imperial Palace--making extensive excavation work next to impossible.

So instead of digging, the ground will be tapped and high-tech detection equipment used to record seismic waves generated by the knocking.

The speed at which seismic waves travel should become slower in the moat areas where the foundations are looser.

The researchers, centered on those associated with the Disaster Prevention Research Institute at Kyoto University, began looking into the site Oct. 27, using their noninvasive techniques.

Hideyoshi (1536/7-1598) began construction of Jurakudai soon after he became imperial regent, and the structure was completed in 1587.

In his 16th-century history of Japan, the Jesuit missionary Luis Frois described Jurakudai as a gorgeous castle surrounded by stone walls and a deep moat. The stones used were unusually large, according to Frois’ account.

Hideyoshi handed over the post of regent and Jurakudai castle to his nephew, Hidetsugu. However, Hidetsugu was subsequently ordered to commit ritual suicide after falling from grace, and Hideyoshi ordered Jurakudai destroyed eight years after it was completed.

The research group will study nine locations in all, covering a total distance of about 1.2 kilometers.

Old maps and past excavation work have revealed some knowledge of the shape of the more than 1-kilometer-long inner moat surrounding Jurakudai, according to Furukawa, but similar work has not been conducted on the outer moat.

Toshitaka Kamai, a professor at the Disaster Prevention Research Institute and also a member of the group, said, “Confirming the locations of the moats will also be important from a disaster prevention standpoint because there is the possibility of stronger shaking during earthquakes in those areas where the moats were located.