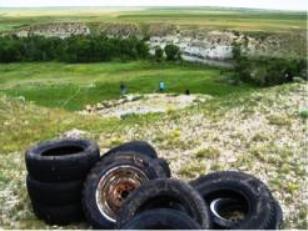 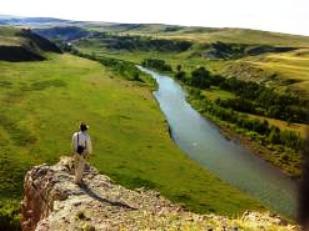 UA graduate Christopher Roos, currently at Southern Methodist University, surveys a bison jump site located in the Two Medicine Valley that may provide evidence for the fire history of the location. (Photo by Jesse Ballenger)

UA researchers are looking for, among other things, how fire changed the landscape of the Northern Great Plains as ancient hunters went after big game.

Researchers from the School of Anthropology at the University of Arizona are investigating the complex relationship between climate change and modifications that humans have made to the landscape. And among the tools they are using in the pursuit of this knowledge are a bunch of old tires.

Led by Maria Nieves Zedeño from the UA Bureau of Applied Research in Anthropology, the Kutoyis Archaeological Project is a four-year collaboration focused on prehistoric bison hunting societies in the Northern Great Plains. The project is funded by the National Park Service and the National Science Foundation.

The Kutoyis project also incorporates a teaching element for members of American Indian tribes in Montana aiming to become cultural-resource technicians. The project exposes them to archaeological training and experiments that are rarely available outside of academic field schools.

The field experiments this year included reconstructing the final moments of a traditional bison hunt. Since using live bison was not an option, the researchers instead substituted old car and truck tires on the recommendation of Dale Fenner, and American Indian who is also one of the team's crew chiefs.

Researchers rolled tires over a 25 meter slope above the cliff and used a stop watch to determine their speed in an attempt to approximate the speed of a running bison.

Based on the tire model, UA doctoral student Matt Pailes, a member of the team, estimated that running bison could have been airborne for a couple of seconds and landed as far as 10 meters from the cliff edge.

"It was a great idea because tires and bison are heavy enough that they behave alike when they fall," said Jesse Ballenger of Statistical Research, Inc. and the project's co-director. "We can also predict landing sites based on the laws of physics, but there's obviously certain qualities of both that complicate the experiment after the first bounce. The short story is that we're finding partially complete bison carcasses much lower on the slope than were they probably impacted."

Ballenger said several animals would have slid and rolled to the bottom of the slope. The abundance of arrowheads found amid the bones at the site are evidence that hunters insured a lethal end to the hunt. Other carcasses likely were dragged down the slope to the site for butchering.

Ballenger and Zedeño led the discovery, mapping and dating of multiple bison kill sites in Montana's Two Medicine Valley to assess the damage caused by widespread bone mining that took place in the 1930s and 1940s to recapture phosphorous for agricultural and WWII industries.

Radiocarbon dates from bison bone, charred plants and even ancient fly pupae adhering to the skeletons of the bison show that large-scale, well-organized hunts were under way at least by A.D. 1000 and peaked by A.D. 1600, two centuries before the explorers Meriwether Lewis and William Clark entered the valley.

The critical theme of the research this year is the ecological consequences of intensive bison hunting. Kacy Hollenback, another UA doctoral student, along with Christopher Roos of Southern Methodist University, mapped and sampled young sedimentary deposits near three drive lines to find evidence of local fire histories. According to Blackfeet tribal elders, ancient hunters may have used fire to frighten and move bison herds or to promote the growth of forage near strategically situated kill sites.

The team recognized the significance of this aspect of the project in 2007 when detailed mapping of the Kutoyis drive line system revealed repairs associated with local hillside erosion, which may have been triggered by intensive traffic or burning. Drive lines, small piles of rocks used by hunters to guide bison to the cliff, extend at least four kilometers (2.5 miles) from the cliff fall and the oldest date to A.D. 1000.

The best evidence of the human use of fire is found in the stratified beds of bone below the cliff where successive kills were systematically burned, a possible strategy to reduce pests and scavengers. New evidence from the Kutoyis site suggests that this may have been necessary to accommodate the days it likely took to process meat from individual kills.

Subsurface magnetic anomalies identified at the Kutoyis in 2010 by Jeff Jones of Archaeo-Physics, LLC, were excavated this year to identify multiple dense concentrations of burnt sediments, broken bison bones and artifacts, including wood, chopping tools, knife resharpening debris, broken pottery and other artifacts associated with the camp.

Preliminary analysis of the bison bones by UA graduate student Benjamin Curry indicates that spatially discrete butchering locations occur below the site surface, a possible record of the proportion and quality of cuts of meat that were distributed across the camp.

"The Kutoyis site appears to contain a kill area, an initial processing locale and final intensive processing centers in which all usable meat and marrow was eventually removed from the carcasses," Curry said.

The researchers hope to secure funding to continue working at the Kutoyis and other sites in Two Medicine Valley.

Said Zedeño: "With the Blackfeet Tribe and its historic preservation officer, John Murray, as partners and hosts, this team has created a fruitful partnership where state-of-the-art technology, traitional knowledge and human ingenuity inform the design and execution of archaeological research."