Kushe (Nigeria) : A Nok terracotta head, at around 2000 years old

Look into the eyes of a rare ancient African sculpture 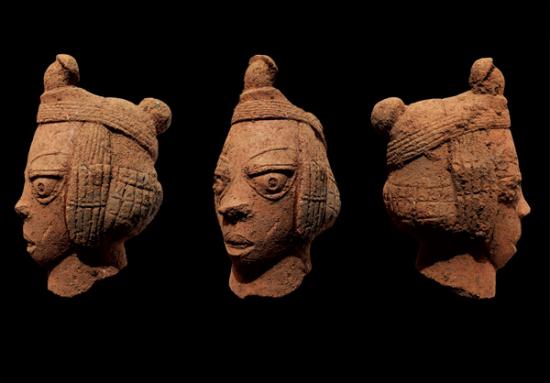 If they exist at all, most unglazed clay objects from ancient times are now rubble, mere fragments of their former glory.

This terracotta head, at around 2000 years old, is a rare exception. Excavated from a village in Nigeria, this is one of the best-preserved examples of its kind ever discovered. It is a product of the Nok culture that flourished from about 1000 BC to AD 500, when it mysteriously died out, and provides examples of the earliest figurative art in sub-Saharan Africa.

Archaeologists Peter Breunig and Nicole Rupp of the Goethe-University Frankfurt in Germany uncovered the head during the 2010 field season. It was found in Kushe, a small village about 150 kilometres north of the capital Abuja. Amazingly, this specimen was very close to the surface - only 60 centimetres down.

The Nok terracottas are a mystery. No one knows for sure what they were used for. They may represent dead members of the Nok community and could have been a votive offering at a shrine. Alternatively, the figurines may have been grave goods.

Africa has seen a resurgence of archaeological activity to investigate Nok culture. Part of this has to do with interest in Iron Age societies in Africa, which is surging as anthropologists consider how technologies - especially those based on iron - spread. The Nok are considered to be one of the earliest, if not the earliest, people to smelt iron on the African continent.

However, the research is under threat. Over the past half-century countless Nok terracotta specimens have been looted from hundreds of sites in central Nigeria. The booty has found its way onto the international art and antiquities market, ending up in the hands of private art collectors.